COLORADO SPRINGS, Co. — At the luxury Colorado Springs resort The Broadmoor — which sits in a valley set behind a picturesque backdrop of mountains — Charles Koch organized a three-day gathering of activists, politicians and wealthy donors that are interested in the libertarian initiatives of the Koch’s “Liberty network.”

The theme of the conference was “The Courage To Lead,” intended to encapsulate the idea that “America’s best days are ahead of us,” Executive Vice President of Freedom Partners James Davis told reporters. Essentially, the theme could be simplified to “helping people improve their lives,” Koch network co-chairman and General Counsel for Koch Industries Mark Holden said.

Some 400 men and women, including over 140 first-time participants, attended the seminar network’s June conference in Colorado, and many have donated over $100,000 to the network’s various programs.

Held twice a year, the June seminar was the second since the election of President Donald Trump, although the president was rarely mentioned in any of the sessions, lectures or even in casual conversation. Koch did not mention the president once when addressing the attendees Sunday, nor did other speakers, like Sen. Ben Sasse of Nebraska or the three Republican governors in attendance — Gregg Abbott of Texas, Matt Bevin of Kentucky and Eric Greitens of Missouri.

Instead, the focus was on the many areas of American society that the network believes the nation is in a “once in a lifetime” position to improve. The main focuses for the network in 2017 include: reforming the criminal justice system, attacking the fundamental drivers of poverty, achieving comprehensive tax and regulatory reform, promoting free speech and toleration, achieving a free-market driven health care system and reforming and improving veterans affairs. (RELATED: Deion Sanders Launches Initiative At Koch Conference) 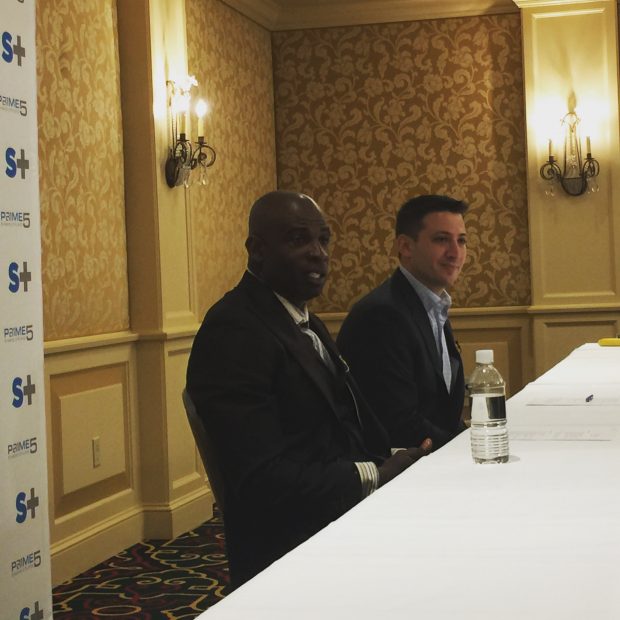 What success in these initiatives would look like is helping to bring an end to a greatly stratified society, where too few benefit and far too many are left behind, network officials told The Daily Caller News Foundation.

“There is a massive dissatisfaction with our rigged two-tiered society that is destroying opportunity and pitting people against each other,” Koch told a group of hundreds gathered in a ballroom Sunday. “It causes so many people to have disillusionment with the core society. If this continues, this will mean a very grim future for our society.”

To fix it, according to Koch, we must remove the “barriers to opportunity” that hold so many back, keeping them entrenched in poverty, stuck in crime riddled neighborhoods and largely without hope for a brighter future.

“I believe it is by removing these barriers to opportunity. That includes both internal and external barriers. The starting point is in reaching those who are in despair and convincing them that they can learn, contribute and succeed,” Koch said. “We have to help them make that belief a reality. We have to help them attain a valued skill that people are going to compensate for … This is the path to success for everyone I’ve ever known or ever heard about.” 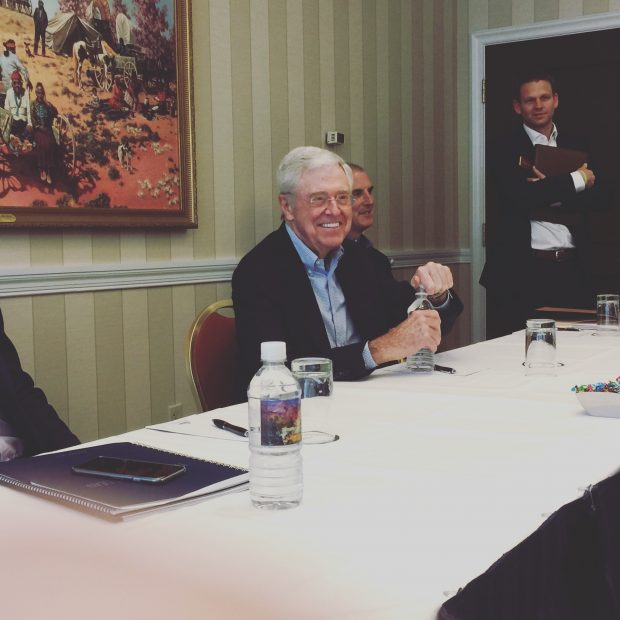 The Koch network — which includes nearly 100,000 donors nationwide and grassroots organizations operating in 36 states — announced at the year’s first conference in Palm Springs, Calif. that it would spend between $300 and $400 million during the 2017-2018 cycle to achieve great strides in all of its key initiatives. (RELATED: As Trump Presidency Dawns, Kochs Plan To Spend Hundreds Of Millions To Bear On Next Two Years)

“We think it is going to be on the high end of that range,” President of Americans For Prosperity Tim Phillips told reporters.

Phillips explained the network’s approach to politics, which is the largest portion of the network’s operation to receive media coverage. First, the network looks “to see if there is a candidate who represents a vision on the issues of bringing an end to this two-tiered society,” Phillips told reporters. After that, they look to see if the network is “really in a position to impact the race if we do not get involved.”

Koch-affiiliated organizations threw hundreds of millions of dollars behind limited-government candidates for the U.S. Senate and the House of Representatives in the 2016 election cycle, but notably stayed out of the presidential race.

“It’s been defense for our side, mostly, trying to stop bad things from happening … or at least mitigate the bad things coming out of Washington,” Phillips told reporters at the January conference in Palm Springs.

While the network was not involved in the 2016 presidential race, the June conference had many familiar political faces to the Koch-affiliated organizations. Vice President Mike Pence, who previously attended Koch network conferences in Colorado and received its support while serving as Indiana governor, visited the resort Friday night. The meeting reportedly consisted of “good cordial discussions of issues” important to the network, but was in no way to “push” or press the vice president on any policy agenda, Phillips told reporters Saturday.

Sen. Ted Cruz of Texas, the last remaining Republican contender to Trump in the 2016 race, was in attendance Saturday for the network’s conference, although he did not speak publicly.

It is important to note that the network has also found itself in stark opposition to certain members, or policies, of Trump’s administration. Arguably the most notable point of difference lies with Attorney General Jeff Sessions, on criminal-justice reform at the federal level and on his recent stances on low-level drug offenses.

“We respectively disagree with him,” Holden said. Sessions’ policies leading up his nomination and during his months as attorney general, Holden believes, are simply “based on fear and emotion.”

Overall, network officials believe that the past year has brought “more progress than ever” towards advancing liberty and empowering individuals and communities to succeed, Davis told reporters.

A favorite moniker Koch himself uses to describe his guiding philosophy is a quote attributed to his life-long hero Frederick Douglas, a self-educated writer, orator, abolitionist and social activist. “I would unite with anybody to do right and nobody to do harm.”

Editor’s Note: The author is a former Associate of the Charles Koch Institute in 2016