Thousands of people attended a memorial ceremony in Yokosuka, Japan for the seven American sailors killed after a cargo ship smashed into the side of a U.S. Navy destroyer.

More than 2,000 sailors and their families were present, waving American flags in memory of the fallen, according to the Navy, the Associated Press reports.

The Philippine-flagged container ship ACX Crystal collided with the Arleigh Burke-class guided-missile destroyer USS Fitzgerald before dawn Saturday June 17. As the merchant ship was more than three times the size of the naval vessel, it ripped through the American warship, causing significant damage to the starboard side, both above and below the waterline.

The ship took on water, flooding several berthing compartments where sailors were sleeping at the time of the incident. Navy divers discovered the bodies of seven sailors in the hull of the ship. 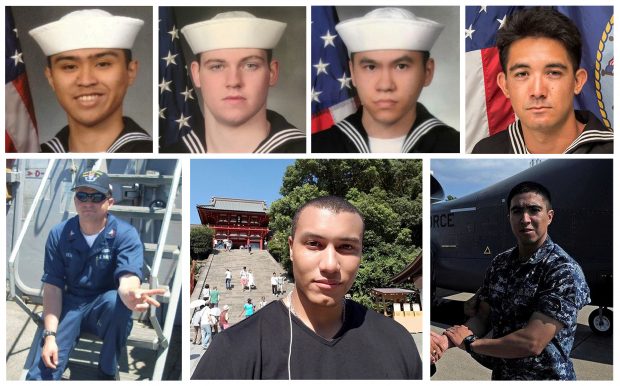 A combination photo of the dead sailors identified by the U.S. Navy in the collision incident between U.S. Navy destroyer USS Fitzgerald and Philippine-flagged merchant vessel south of Tokyo Bay on June 17, 2017. U.S. Navy/Handout via REUTERS 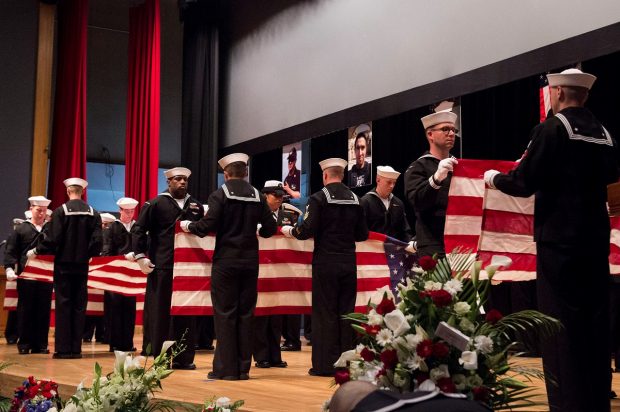 Adm. Scott Swift, commander of the U.S. Pacific Fleet, praised the crew for keeping the Fitzgerald afloat after the incident.

Members of the crew demonstrated bravery in courage in a difficult situation. 37-year-old Rehm, one of the ill-fated sailors, sacrificed himself to save his shipmates. He repeatedly dove into the flooded compartments and saved around two dozen sailors. Rehm lost his life when he went back to save the his brothers in arms. While some sailors took action to rescue trapped or injured crew members, others rushed to save the ship, which might have otherwise been lost. 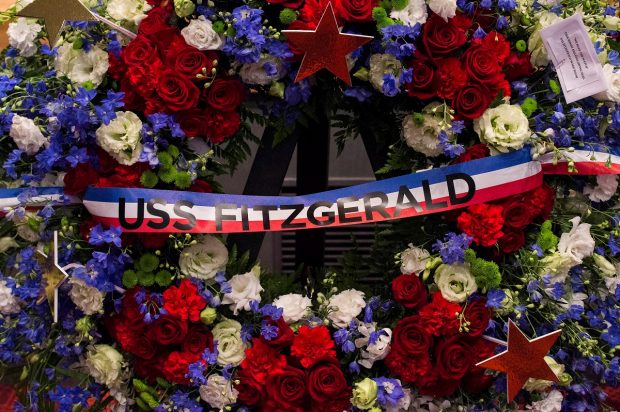 A bouquet of flowers in a memorial ceremony for seven sailors assigned to Arleigh Burke-class guided-missile destroyer USS Fitzgerald (DDG 62) who were killed in a collision at sea, June 17, is seen at Fleet Activities (FLEACT) Yokosuka in Yokosuka, Japan in this photo taken and received June 27, 2017. Courtesy of U.S. Navy/MC2(SW) Raymond D. Diaz III/Handout via REUTERS

“Heroic efforts prevented the flooding from catastrophically spreading, which could have caused the ship to founder or sink,” Vice Adm. Joseph Aucoin, the head of the 7th Fleet, stated Sunday, “It could have been much worse … Because of the tireless damage control efforts of a resolute and courageous team, the ship was able to make its way back to port safely.”

Six investigations followed the fatal collision. There have been two internal hearings by the Navy, a probe by the U.S. Coast Guard, as well as investigations by the Japan Transport Safety Board, the Japanese Coast Guard, and the Philippine government. The investigations are focused on how a destroyer equipped with advanced radar be struck by a significantly larger vessel. 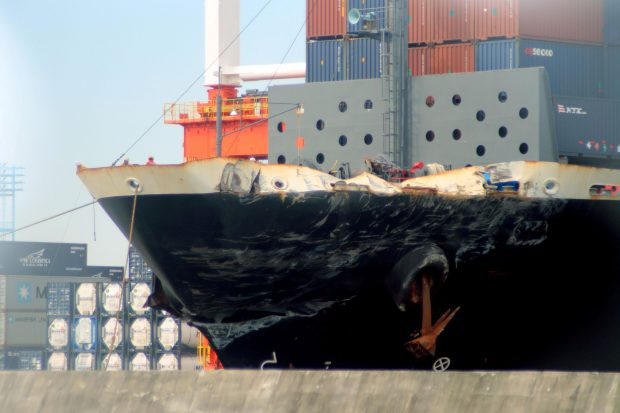 ACX Crystal, the Philippine-flagged merchant vessel that was damaged after colliding with the Arleigh Burke-class guided-missile destroyer USS Fitzgerald, is seen at a port in Yokohama, Japan in this photo taken by Kyodo on June 19, 2017. Mandatory credit Kyodo/via REUTERS

The captain of the ACX Crystal claims that the destroyer failed to respond to warnings, but there are still a lot of unanswered questions surrounding this tragic incident.

Acting Secretary of the Navy Sean Stackley has ordered that the American flag be flown at half mast from sunrise to sunset Tuesday. “We’re not going to be over this,” Adm. Swift told Stars and Stripes, suggesting that the scars of this incident, the largest loss of life for the Navy since the bombing of the USS Cole in 2000, will last a long time.