GOP Sen. Ron Johnson of Wisconsin said he believes the Congressional Budget Office’s numbers for how many people would lose coverage under the Better Care Reconciliation Act could be wrong due to the use of outdated information.

Johnson, who was against a vote on the measure this week, citing lawmakers needing more time to process the information — argued the nonpartisan scorekeeper used an out-of-date baseline while conducting its analysis.

The CBO report projected 22 million more people would go uninsured over the course of a decade than under current policy, but according to the Wisconsin Republican, it’s likely wrong.

“The headline figure is 15 million Americans lose coverage the first year, that’s using — that’s using a baseline from March of 2016 when those markets were unstable, but nowhere near where they are today,” he told MSNBC. “The most recent CBO baseline we have as of January 2017, which was not being used, on the individual market, there’s no difference, and that was 7 million of the 15 million. 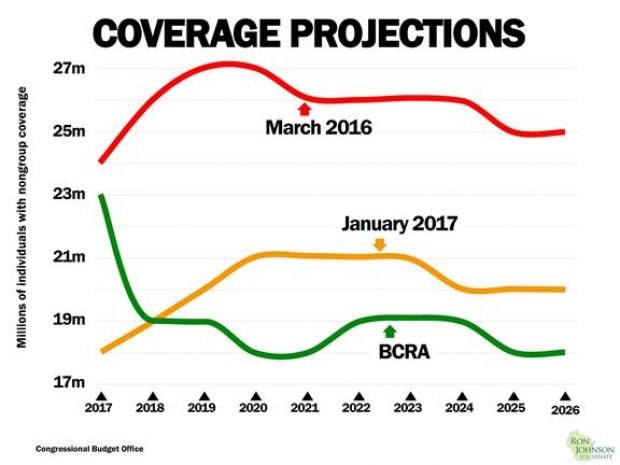 “That from my standpoint is big news because the distortion of the original CBO report is just wrong because it’s comparing against a very old baseline — a year and three-month-old information, so that’s all I was asking for guys, we need more time and more information,” he continued.

Johnson said the BCRA gives lawmakers an additional $200 billion in deficit reduction, which should give lawmakers more leeway to do what is needed to get a bill that will pass both chambers.