Just days after being singled out on Twitter by President Trump, CNN centered its coverage around a pair of tweets from the president on Thursday morning, presenting Trump’s personal attacks on MSNBC hosts Mika Brzezinski and Joe Scarborough as the driving issue of the day.

Trump referred to the two hosts as “Low I.Q. Crazy Mika” and “Psycho Joe,” and claimed he refused to hang out with Brzezinski on multiple occasions shortly before New Years Eve because, “she was bleeding badly from a face-lift.” Trump’s tweets followed a “Morning Joe” segment where Brzezinski and Scarborough mocked the size of Trump’s hands. (RELATED: CNN’s Month-Long Nightmare)

Trump sent out the two tweets out shortly before 9 a.m. For the rest of the day, those tweets dominated CNN’s news coverage.

It didn’t take CNN long to make Trump’s tweets the lead of its website. The site’s banner read: “The President of the US tweeted this,” and featured a picture of Trump’s tweet as the featured image.

The tweets were bad, but this seems like a bit of an overreaction by https://t.co/Ri0Erb16tb pic.twitter.com/9AqjkoEeSv

CNN’s online coverage Thursday afternoon led with Republican criticisms of Trump’s tweets, along with Brian Stelter’s original story on the tweets describing them as a “shocking assault,” editor-at-large Chris Cillizza’s analysis of the tweets — which he described as “bullying” that “crosses a big line,” a Cillizza podcast on Trump’s tweets, a story about first lady Melania Trump’s spokesperson’s reaction to the tweets and a video of a CNN panel debating Trump’s tweets. 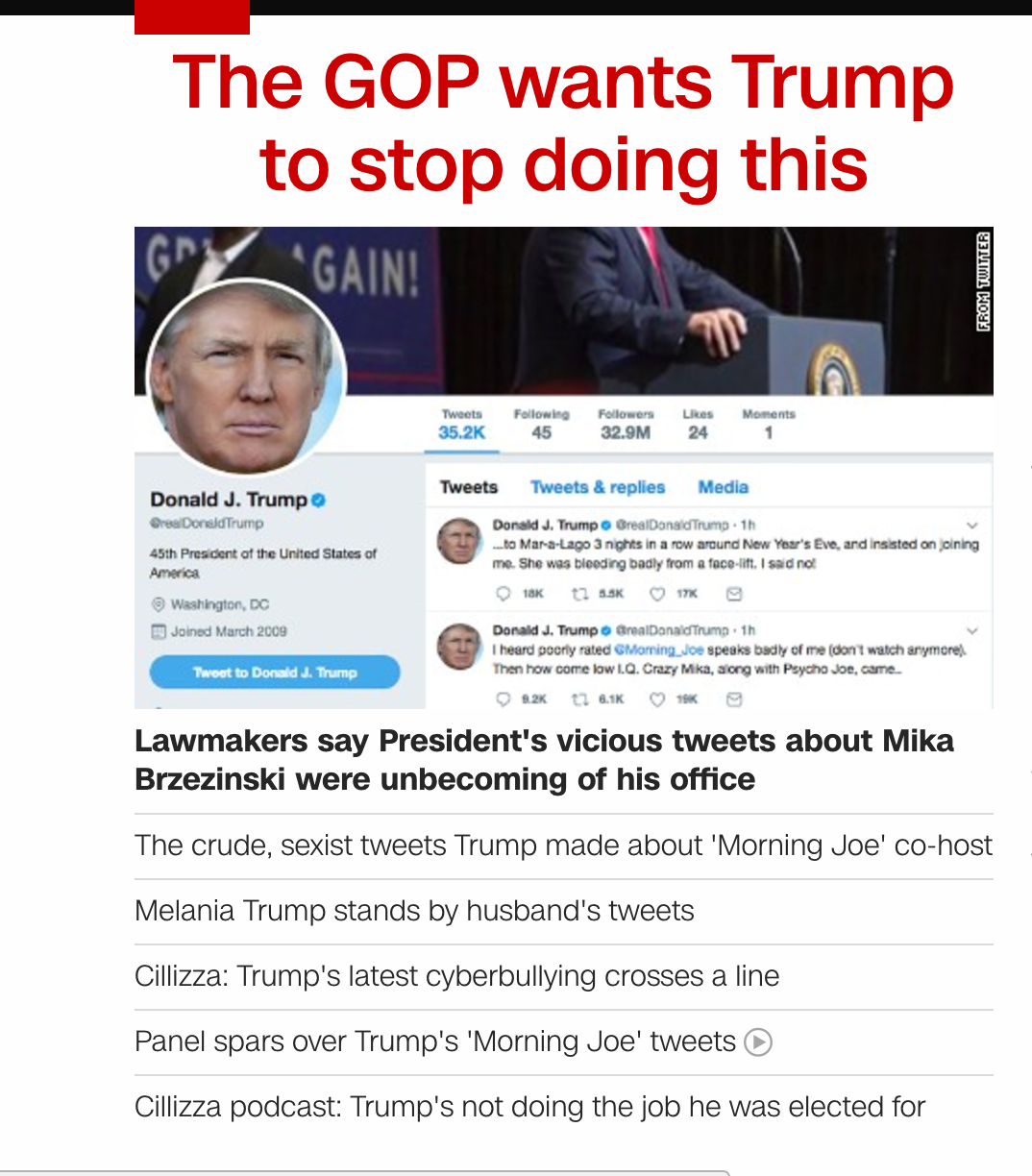 CNN, which Trump labeled “fake news” just two days prior, cycled fresh articles about Trump’s tweets onto its front page throughout the afternoon and evening, including a Jake Tapper monologue about Trump’s penchant for tweeting about the media, a story about J.K. Rowling taking a shot at Trump over Twitter, an explainer on why Trump hasn’t gotten kicked off Twitter, a recap of disparaging remarks Trump has previously made about women (including on Twitter), another Chris Cillizza analysis on Trump’s tweets (this time on deputy press secretary Sarah Huckabee Sanders’ defense of them) and another opinion article that said Trump’s tweets captured “the essence of sexism.” All of those stories were at one point prominently featured, either as CNN’s lead story or just below it, during CNN’s marathon coverage of the two tweets.

CNN White House correspondent Jim Acosta appeared to demand an apology for the tweets at the end of White House Sanders’s press briefing Thursday afternoon. “No apology from the president, Sarah?” Acosta asked as Sanders walked away from the podium.

CNN’s TV coverage was no less intense. Beginning with the 9 a.m. hour, the network covered the tweets in depth every hour as anchors, panelists and guests expressed their outrage that the tweets.

CNN media reporter Brian Stelter took New York City councilman Joe Borelli — who appeared to be the token Trump supporter on one panel — to task for not condemning the president’s tweets, before saying that “everyone in the media should be standing up today and saying that it’s inappropriate for the president to behave this way.”

CNN’s John King similarly expressed his outrage at the tweets, saying, “This isn’t just some boorish, sexist guy in a bar making an ass of himself. This is the president of the United States.”

Anchor Wolf Blitzer used the tweets as an excuse to roll out 25 seconds of an old Hillary Clinton campaign ad that portrayed Trump as a sexual predator. Throughout the day he discussed the tweets in-depth with critical guests. In one such segment on Blitzer’s show, CNN commentator Ana Navarro claimed Trump was “acting like a mean girl.”

In another, CNN chief political analyst expressed alarm about the tweets, wondering: “I have a six-year-old boy. How do I explain to him that you can’t say things like this?”

.@DanaBashCNN “I have a 6 year old boy. How do I explain to him that you can’t say things like this…” https://t.co/8RHuNA0AZX

Cillizza similarly appealed to the innocence of children in expressing his outrage during a panel on Trump’s tweets that led off CNN’s 3 p.m. news hour.

“I know asking people to take their partisan hat off won’t happen, but there is no way you look at that and you say, this is the kind of behavior that I am okay with in a society in which we are trying to raise our children, in which we are trying to say this is how you act and this is how you don’t act,” Cillizza said. Another panelist, liberal Sally Kohn, said the tweets made her “feel so sad for my country today” before calling Trump’s media attacks “totalitarianism” and “scary.”.

Anchor Jake Tapper led off his 4 p.m. show by continuing the network’s coverage of Trump’s tweets, and tied them to Trump’s promotion of the birther conspiracy theory surrounding Barack Obama’s birth certificate. Tapper then broke down Trump’s tweets by the numbers, noting the quantity of tweets Trump has sent about the media since inauguration day. (That monologue would later be prominently featured on CNN.com’s home page.) Tapper’s show then followed up by bringing up Trump’s history of crass comments about women. Tapper spent the first twenty minutes of his hour-long show addressing Trump’s tweets and then returned to the subject while interviewing Republican Senator Pat Toomey about health care later in the show.

Blitzer repeatedly brought up the tweets during the 5 p.m. news hour, at one point asking political analyst Dana Bash about the tweets, “is gender and sexism an issue here?”

CNN similarly covered the president’s tweets throughout the 7, 8 and 9 p.m. broadcasts.

And, at 10 p.m. — more than 13 hours after the president sent out the insults — CNN’s online coverage was still dominated by stories about the two Trump tweets. 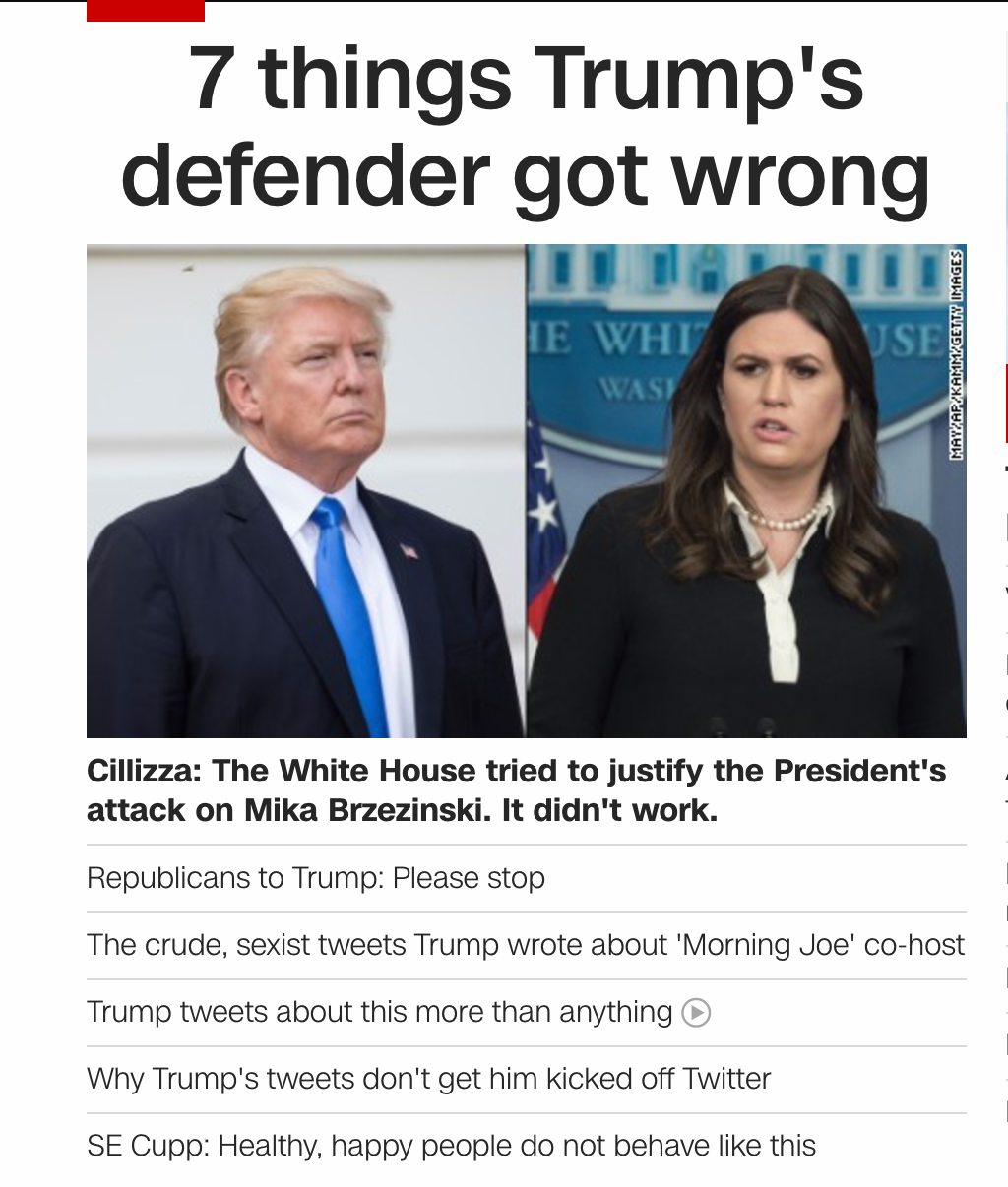