The compliment was bland. He didn’t tell the Irish journalist that he wanted to grab her by the pussy. Instead, the Prez with the horrible hairdo told her she had a “nice smile.”

Caitriona Perry was visting the Oval  Office when Trump remarked on her smile. At the time, he was on the horn with Irish Prime Minister Leo Varadkar. Perry later tweeted about it, calling it “bizarre.”

CNN’s Don Lemon dissected the incident on his program just before midnight Thursday, which is apparently the witching hour. Cardona went absolutely berserk.

Lemon spoke of a woman he’d seen in the elevator. As far as we know, Lemon wasn’t checking out her rack. A style hound himself, he liked her colorful blouse. “I said..’You look very nice today,'” he told his panel. “‘You look very summery.’ She said ‘thank you.’ I walked into the elevator and she walked out of the building.”

She joked, “And I think I saw her tweet that that was really bizarre, Don.”

The more normal the panel reacted to the whole thing, the more dramatically reactionary Cardona became.

It was amazing she could even get through the discussion without an oxygen mask.

“I will tell you what’s wrong with it,” Cardona said. “It is context. Don, you are not in a public setting, you are not representing the United States of America on the phone with another leader of a nation. You are not the commander-in-chief. You are not in a room full of professional journalists, men and women, and you are not calling out JUST that one woman and telling her she had a pretty smile and saying that because she had a pretty smile she was probably covered the prime minister in a POSITIVE WAY. That is completely offensive you guys, PERIOD.” 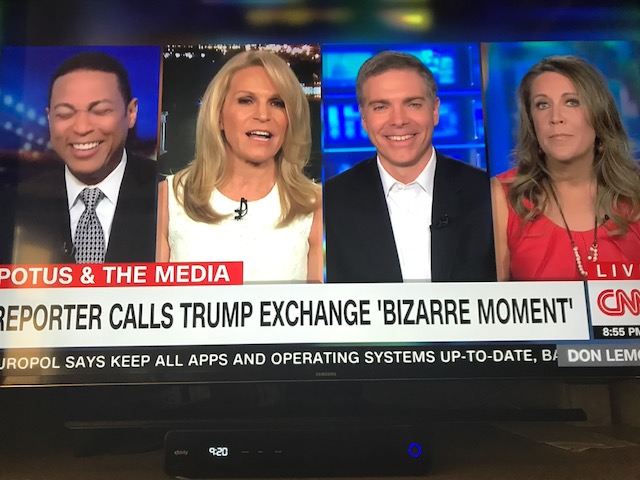 Stewart swatted her down. “I think it’s overblown,” she said. “She said it was ‘bizarre.’ She didn’t say she was offended or she was disgusted. …I think ‘bizarre’ is a far cry from all the hype that is being made about this situation.”

Cardona grew emphatic. “Bizarre is not okay when you’re looking to have a normal, professional encounter with the president of the United States,” she said. “Again, lowering the bar.”

At one point Cardona compared what Trump did to commenting on a woman’s butt.

Lemon had to intervene: “He said nothing about her butt, Maria.”

Lewis also tried to defend Trump: “He didn’t say ‘you look hot,’ or anything inappropraitioate. At some point, the speech police, you can’t compliment someone on that summery blouse, Don, because that’s crossing a line.”

He also said Trump was “of a certain age” and naturally spoke like that.

Cardona’s eyeballs bulged out of her head. “You shouldn’t,” she told Lewis. “You shouldn’t compliment someone when you’re president of the Untied States and you’re talking to a journalist from ANOTHER COUNTRY…Why couldn’t he call her out because of the great piece she had written last week?”

You know, instead of for her breasts or her ass. Which, actually, Trump didn’t do.

Stewart cracked, “If he had said she had a great piece, that would be a story. I just think the outrage is way overboard.”

Lemon concluded his segment by mock sexually harassing everyone on his panel.

“Alice, you look very nice in your white blouse,” he said. “Your hair looks great. Matt, you are very handsome in your suit, your necktie. Maria, I think you look great in red and also you’re wearing wonder woman sneakers.”

Cardona’s compliments were caustic, but thankfully she didn’t try to talk about Lemon’s or Lewis’s penises. “Don and Matt, I think you both look really hot. Alice, you look really hot too.”

Lewis replied, “I actually take that as a compliment.”

Stewart: “That’s not bizarre at all.”