After MSNBC TV couple Joe Scarborough and Mika Brzezinski revealed Friday that the The National Enquirer had threatened to publish an exposé on them if they didn’t grovel to President Trump, the supermarket mag made good on its word.

Just out this morning, the tabloid re-upped an early June hit piece that the “Morning Joe” co-hosts were involved in a “sleazy cheating scandal.” It is well known that Trump is close pals with Enquirer owner David Pecker.

The piece comes in a slideshow format with captions.

Both Joe and Mika were married to other people when they became co-hosts. They have since divorced and recently got engaged after Joe proposed in the south of France. At the time, Mika opened up extensively to Vanity Fair about her love for Joe and how she couldn’t ignore it any longer. 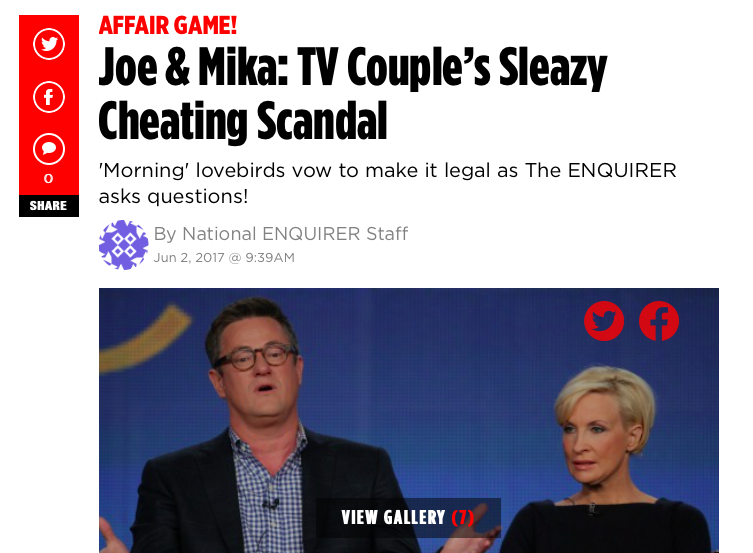 The story reports that Joe and Mika “started hooking up while married to other people.”

The mag says the couple has been “sneaking around” since 2013.

It also purports that the couple “rushed into an engagement after our investigation threatened to expose their illicit affair.”

The story refers to Mika as Joe’s “President Trump bashing sidekick.” It says Scarborough pays out a hefty monthly sum in “hush money” to his ex-wife Susan Waren so she won’t reveal details about the cheating.

The story quotes an alleged grocery store owner near Mika’s abode as saying he’s seen the lovebirds “hundreds” of times.

On “Morning Joe” Friday, Mika said the tabloid “harassed” her teenage daughters. She said they called her and told her that her ex-Jim Hoffer was behind the story. Mika said she knew right then and there that they were lying.

On “Morning Joe” Friday, Joe said he was at Mika’s home “for a little while” and noticed a guy in a van outside.

In the end, they refused to beg for Trump’s forgiveness for their coverage.

“Screw it, run it,” Mika said, describing their attitude about it.

And well, the tabloid obliged.