Several anchors and reporters at CNN have had their home addresses published and have received threats of rape and other violence in the wake of a story published by Andrew Kaczynski, who heads up the network’s investigative K-FILE team. Anti-network trolls are encouraging viewers to wrongly accuse CNN staffers of pedophilia and child pornography. There is also “tons of anti-Semitism.”

“Frustration” is the predominant feeling inside CNN, The Mirror has learned.

Kaczynski published a story on the 4th of July in which he appeared to threaten to publish the name of a Reddit user who parades around anonymously as “HanAssholeSolo.” HanAssholeSolo claimed to be the originator of the wrestling video tweeted by President Trump in which POTUS flattened a wrestler whose face was a CNN logo.

Trump has long accused CNN of being “fake news” and “very fake news.”

The network seems to be fulfilling Trump’s need for a public enemy. In other words, CNN fills the void for “Low energy Jeb,”  “Little Marco,” “Lyin’ Ted” and “Crooked Hillary.” In recent months, CNN has become a virtual punching bag for Trump supporters. The reason doesn’t often matter. Be it White House correspondent Jim Acosta bitching about press access or “New Day” host Chris Cuomo deleting a tweet, they’re drunk on hate and their perception that the network is not giving Trump a fair shake. They delight in clobbering the network as much and as often as possible.

Kaczynski’s home address has been posted online as have those of various CNN anchors and reporters.

“Frustrated by our critics’ double standards,” a CNN insider said on condition of anonymity. “Frustrated that CNN staffers’ private information is being published in ‘retaliation’ — when the network made the decision to not out the Reddit user. Frustrated by the speed in which misinformation, lies and hate spreads. Frustrated that POTUS’s son has no accountability.”

Some CNN employees are taking steps to protect themselves, but details are hush-hush as revealing them could jeopardize employing safety measures in the first place.

For one thing, the Reddit user in question is not 15 but a middle-aged man. 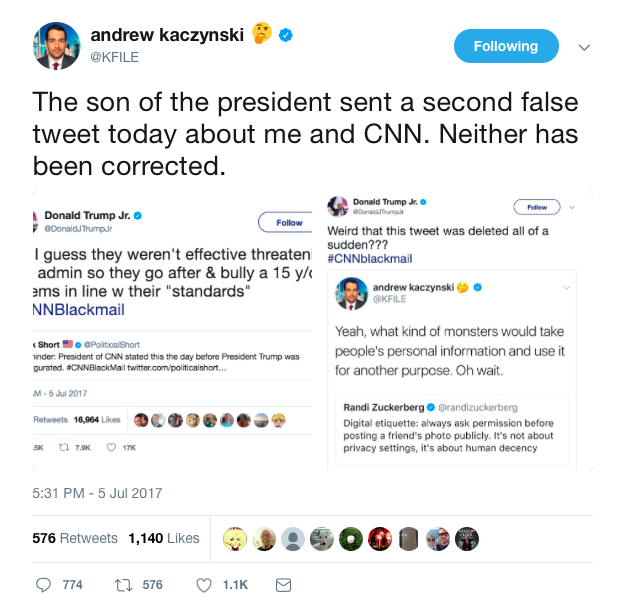 Here are the most contentious lines of Kaczynski’s story:

“CNN is not publishing “HanA**holeSolo’s” name because he is a private citizen who has issued an extensive statement of apology, showed his remorse by saying he has taken down all his offending posts, and because he said he is not going to repeat this ugly behavior on social media again. In addition, he said his statement could serve as an example to others not to do the same.

CNN reserves the right to publish his identity should any of that change.”

The Mirror has learned that Kaczynski did not write those lines.

Rather, they were inserted in the editing process.

“CNN is held to a wildly higher standard than our critics hold each other or themselves,” the CNN insider continued.

“And yes. Many staffers addresses, phone numbers were released and families were targeted.”

Some CNN anchors like Cuomo are shoving back against the critics.

When a follower raised the issue of former President Obama‘s birth certificate, Cuomo brought the hammer down.

FOLLOWER: Could @CNN “verify” Obama’s submitted BC yet, because at least 3 scientific forensics examinations say its an obvious fake.

CUOMO: Still on the birther thing, Dave? Find Elvis yet?

ANOTHER FOLLOWER: Poor Chris … this is getting sad when our journalists still get asked this. It’s simply racist and ignorant – or maybe trolling.

CUOMO: This is an opportunity for people like me. I will fight fact vs fiction all day. Every. Damn. Day.

YET A THIRD FOLLOWER: Also, regardless of his other posts on Reddit, that CNN video was hilarious! Saying that video was funny doesn’t = agreement to every post.

CUOMO: I have no problem with CNN video. Bigotry is something else. Feeding anti-Semitism is disgusting. People taking up for him and that? Bs.

Ex-Gov. MIKE HUCKABEE: CNN-the “Corleone News Network”. Make fun of them with a humorous gif and they threaten you. On 4th of July no less!

CUOMO: You are fact-poor, governor. You see what this man put out on his site? You think it is all humorous?

CUOMO: This should be exposed. This is not humorous. This is not just about a meme. These people exist and should account for hate.

Right-wing blogger Mike Cernovich is among those who have climbed onto the holiday bandwagon to bash CNN: “How brave of CNN, a multi-billion dollar corporation, to go after a private citizen,” he wrote on Twitter.

Even Ezra Klein‘s liberal site Vox has taken up an anti-CNN position and is severely criticizing the way Kaczynski’s story was written.

The official statement from CNN is this:

And those lines in Kaczynski’s piece that have made Trump supporters and online observers so angry?

“The line that raised the most eyebrows was inserted during the editing process,” the insider added. “But I’m not sure who inserted — editor, legal or standards. I do know the intention was exactly the opposite of the outcome.”