Lindsay Lohan retweeted a tweet promoting Supreme Court Justices Clarence Thomas and Neil Gorsuch, raising the prospect that the actress and singer is also a proponent of constitutional originalism.

Lohan, who has recently lent her fame to the cause of defending President Donald Trump, retweeted a tweet heralding Gorsuch’s consistent alignment with Justice Clarence Thomas, the Court’s foremost proponent of originalism. Originalism is a theory of interpretation that holds that the Constitution should be interpreted in accordance with its original public meaning. 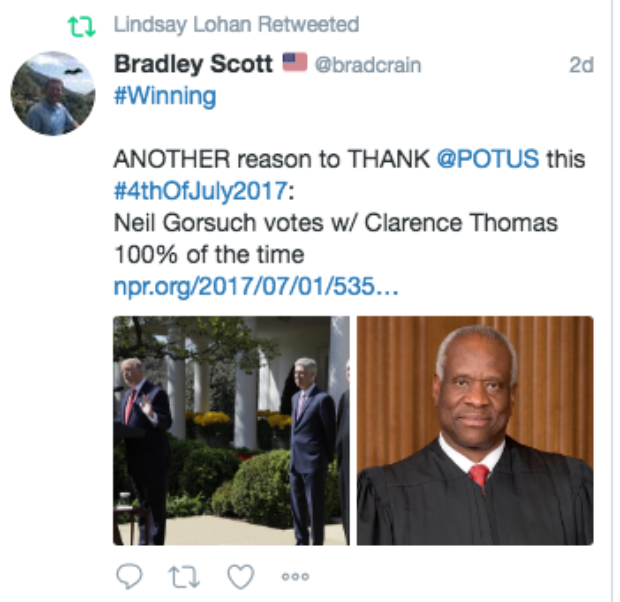 The tweet links to an NPR story by Nina Totenberg, who notes that Thomas and Gorsuch voted together 100 percent of the time over the last term, according to SCOTUSblog. They have written together to express their own views in cases concerning secular public benefits for religious institutions and the Second Amendment, among other topics.

Some legal observers speculate that the Gorsuch-Thomas axis could define the future of the Court’s conservative majority.

Lohan has not made remarks on other legal topics that The Daily Caller News Foundation could identify.