“We used to think of hacking as something some geek was doing in his underwear in a basement, but it has evolved now.”

— As heard on MSNBC Wednesday.

LIFE’s A BEACH: New Jersey Gov. Chris Christie doesn’t apologize for not getting some sun

As everyone knows, as New Jersey’s public beaches are closed, Christie put on what appeared to be a black swimsuit diaper and a baseball hat and hung out on a closed beach with his wife, Mary Pat. Technically, the sun did appear to be hitting his face, despite his aggressive denials about getting sun at a contentious presser earlier this week.

— Christie at a Wednesday presser.

FOMO is alive and well

“I am on vacation but this CNN/Reddit controversy sounds extremely awesome.” — HuffPost‘s Nick Baumann.

In case you think your life is hard…

This puppy was left in an airport bathroom by a woman who said she and the dog were getting beaten by her ex.

“If Tomi Lahren defeats Chelsea Handler in a debate, will that mean that she too is a Chelsea handler?” — Jim Antle, editor, Washington Examiner.

OUCH! Benny Arthur Johnson gets shit for not remembering that he, too, was fired for bad journalism

JOHNSON: “CNN was recently forced to fire a host for promoting violence against Trump & 3 journalists for not vetting anonymous sources correctly”

Is this supposed to be a poem?

“The internet can be a mean place.
As someone who is attacked by an army of frothing trolls on a daily basis, I get this. But it never would occur to me to leverage the might of IJR against my trolls personally, shaming & blackmailing some sad basement-dweller into an unnecessary apology.

There are trolls who live under the bridge of the Internet. Dealing with them is the price you pay for being a known personality or commentator.

In other Johnson news… Insta-clown?

As if proving Johnson’s previous point about how mean the Internet is, a reporter wrote The Mirror to say: “He is literally a clown. A clown and a joke in none of the positive ways.” 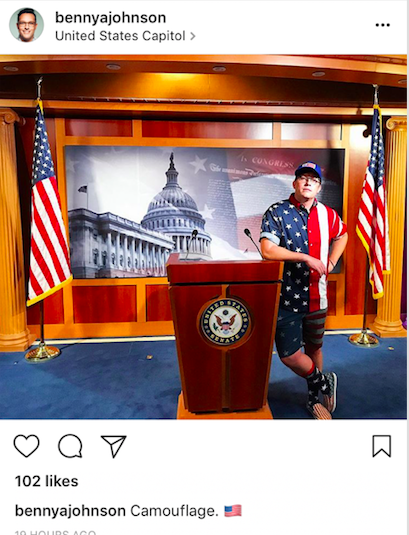 This morning I received a variety of hate mail…

In one note, I was called a “fake news cunt whore” and a “rotten lying dumb bitch.” In another, I was told that “Jewish journalists are like monolithic children. Baa Baa.”

“Omg. When did this become a thing again?” — A media insider to The Mirror.

Note to readers: The hate mail was the result of this story that I wrote about CNN employees receiving rape and other threats of violence. These threats came after CNN investigative reporter Andrew Kaczynski unearthed the man known as “HanAssSolo,” who ran a Trump-CNN wrestling video on Reddit before POTUS caused a media uproar at CNN by tweeting it. Kaczynski’s story threatened to publish the man’s real name if he continued his bad online behavior of publishing violent or bigoted posts.