In another effort to prove Trump is incompetent, The New York Times corrected Trump over a statistic he used in his tweet about Chinese trade with North Korea.

On Wednesday, Trump tweeted that trade between China and North Korea had grown by “almost 40 percent.”

Trade between China and North Korea grew almost 40% in the first quarter. So much for China working with us – but we had to give it a try!

The actual statistic is 37.4 percent, so Trump was clearly rounding up when he said “almost 40%.”

NYT apparently wasn’t happy with the approximation and made sure to call Trump out in an article, claiming “it was not clear” where he got the 40 percent from.

“It was not clear where Mr. Trump got his 40 percent figure,” Jane Perle wrote in a piece on China and North Korea. “China’s trade with the North grew 37.4 percent during the first three months of the year, compared with the same period in 2016, Chinese trade data released in April showed.” 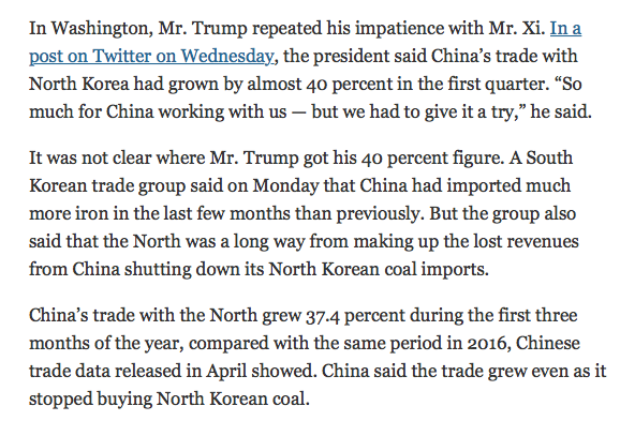 Maybe he’s just rounding up the number you cite in the next paragraph? https://t.co/2D3hOPhfwV pic.twitter.com/MdUp9MyrsW

Just last week, the Times had to issue a correction on a story claiming all 17 US intelligence agencies agreed that Russia “orchestrated the attacks and did it to help get [Trump] elected.” (RELATED: NYT Corrects Story Claiming 17 Intel Agencies ‘Agree’ On Russia)