Unauthorized leaks of national security information occurred seven times more often in the first four months of the Trump administration compared to the Bush and Obama administrations, according to a new analysis conducted by a Senate committee.

In Trump’s first 126 days in office, from Jan. 20 to May 25, there were at least 125 news articles based on classified information that were published in prominent national news outlets, according to a report published Thursday by the Republican side of the Senate Homeland Security and Government Affairs Committee.

“Even a narrow search revealed leaks of comparable information during the Trump administration that were about seven times higher than the same period during the two previous administrations,” reads the report, entitled “State Secrets: How an Avalanche of Media Leaks is Harming National Security.” 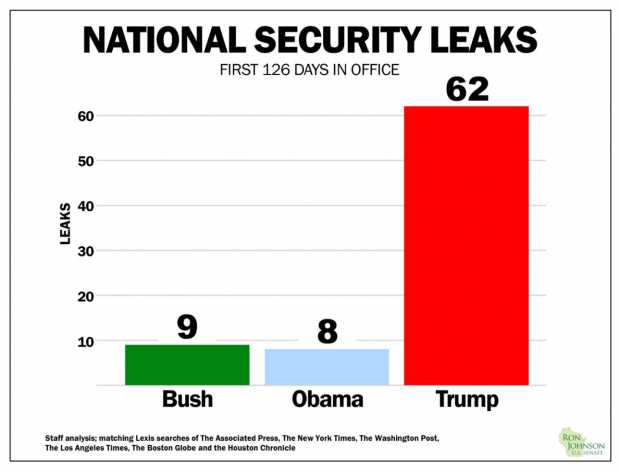 The study, which was authorized by Wisconsin Sen. Ron Johnson, the chairman of the Homeland Security Committee, used Executive Order 13526 as a baseline for the analysis.

Enacted by President Obama in 2009, the executive order laid out parameters regarding classified information, the “unauthorized disclosure” of which “could reasonably be expected to cause identifiable or discernible damage to the national security.”

According to Johnson’s report, leaks of national security information were “relatively rare” during the first four months of Bush’s and Obama’s tenures.

But the U.S. has faced “an unprecedented wave” of leaks of information that falls under Obama’s executive order, the report states.

“Under President Trump, leaks are flowing at the rate of one a day, an examination of open-source material by the majority staff of the Committee on Homeland Security and Governmental Affairs shows.”

Terms such as “Trump and U.S. officials,” and “Trump and people familiar with” were used to narrow down relevant articles. From there, staffers pulled out articles that had no named sources, were based on original reporting, and appeared to contain information that falls under Obama’s executive order.

As a point of comparison, a search using the same methodology was conducted of news stories during the Bush and Obama administrations.

According to the committee’s analysis, a majority of the leaks — 78 of the 125 — concern the ongoing investigations of Russian interference in the 2016 presidential campaign.

Many of the leaks revealed “closely-held information such as intelligence community intercepts, FBI interviews and intelligence, grand jury subpoenas, and even the workings of a secret surveillance court,” the committee found.

The report asserts that the revelations of that information are potential violations of federal law.

“But the leak frenzy has gone far beyond the Kremlin and has extended to other sensitive information that could harm national security,” the report states.

It notes that Trump’s private conversations with foreign leaders have appeared in news articles, and “secret operations targeting America’s most deadly adversaries were exposed in detail.”

The report notes that even Obama’s CIA director, John Brennan, no fan of Trump, has called the avalanche of leaks “appalling.”

It also found another difference in leaks during the Trump administration compared to his predecessors.

“The other half concerned President Bush and his anti-terrorism tactics,” the report states.

STATE SECRETS: HOW AN AVALANCHE OF MEDIA LEAKS IS HARMING NATIONAL SECURITY by Chuck Ross on Scribd