When Charles in Charge‘s wife is your leader, it’s time to rethink your life.

As the wife of D-list celeb and Trump supporter Scott Baio, Renée Baio is a legitimate force on Twitter, a platform she uses to woo her fans and attack her foes.

On Wednesday she shared with her 24,000-follower army a harrowing tale of landing (in a private plane — as one does when you’re married to Chachi) in California, where she lives in Thousand Oaks, from Aspen, where the fam spent the 4th of July.

The holiday weekend started off just fine.  Mrs. In Charge posted various photos to show off her patriotism — a red, white and blue purse, a red, white and blue hat, T-shirt, etc. “I had to have this!” she gushed of the purse, which she photographed on a chaise lounge by a swimming pool. When a follower accused her of putting the bag on the floor (geez, how unpatriotic), she shot back, “1. This bag helps a charity. 2. Bag never touched floor. It’s sitting on my lounge chair. 3. Up yours!”

But on Wednesday things got hairy for our patriotic princess.

Our plane has clearance for takeoff. #Home #G4 @ScottBaio pic.twitter.com/W4kLP1wGCL 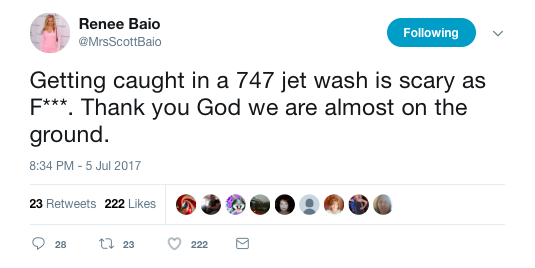 Renée explained, “It’s where the plane rocks 1 way hard, then drops hard & fast, then rocks back & forth until pilot gets control.”

I know what you’re thinking.  After that death defying experience, Mama Baio took a new lease on life, vowing to use Twitter exclusively to spread love and good will.  Not exactly.

Hours later she told former President Obama that he had been “fired,” and to “take a seat and zip it.”

A follower told her off.

“It’s so sad you & Chachi have to twerk for Trump for peanuts! You two can’t even get an informercial out of your butt kissing! #Obama4ever,” wrote Plot Twist.

Always a lady, Baio replied, “If I wanted to hear from an asshole, I’d fart.”