The condoms were decorated with illustrations of endangered species, complete with slogans, like “Wrap with care, save the polar bear” and “Fumbling in the dark? Think of the monarch.”

CBD says the condoms are meant to celebrate World Population Day and raise awareness about the connection between “global population issues” and the extinction of wildlife. CBD claims endangered species are threatened by human population growth, which sending the condoms helps to illustrate.

“We need to draw the connection between human population growth and the wildlife extinction crisis, but that’s not enough,” Leigh Moyer, an organizer for CBD, said in a statement. “We also need to protect straightforward solutions like universal access to contraception for everyone on Earth, starting right here in the United States.”

“Access to reproductive healthcare is a right all women should have,” Moyer said. “It’s also an essential tool in curbing human population growth so we can save room for the wildlife who share the planet with us.” 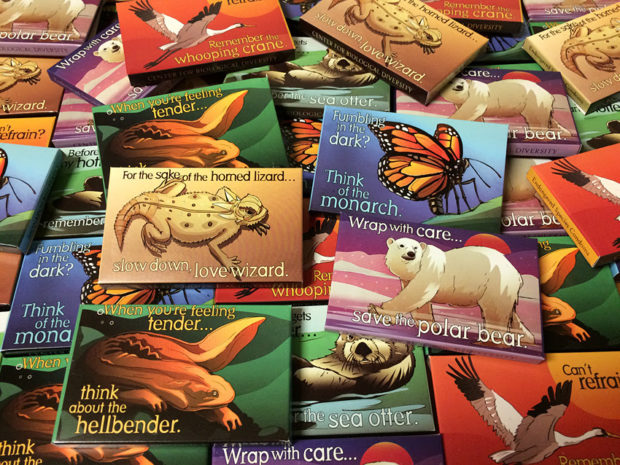 Environmentalists having been arguing population growth could lead to ecological devastation since the 1960s and ’70s. Many activists claimed humanity would starve to death due to mass famines caused by overpopulation.

The Sierra Club once argued “all of our environmental successes may be short-lived if they do not include efforts to address population growth.” One of the group’s founders once claimed the freedom to have kids should be restricted to save the planet.

“Childbearing [should be] a punishable crime against society, unless the parents hold a government license … All potential parents [should be] required to use contraceptive chemicals, the government issuing antidotes to citizens chosen for childbearing” David Brower, the first executive director of The Sierra Club, stated in an interview in 1990.

The mass famines environmentalists fear have failed to materialize because of an agricultural revolution that boosted world food production in the following decades. The amount of food per person has steadily increased, despite population growth.