Deray McKesson, one of the leaders of the Black Lives Matter movement and a defendant in a recently filed lawsuit alleging he incited violence against New Orleans police, is not happy with a picture from the new War for Planet of the Apes movie opening Friday.

McKesson is angry that one of the apes is wearing a vest, he believes, is like the trademark vest he wears. 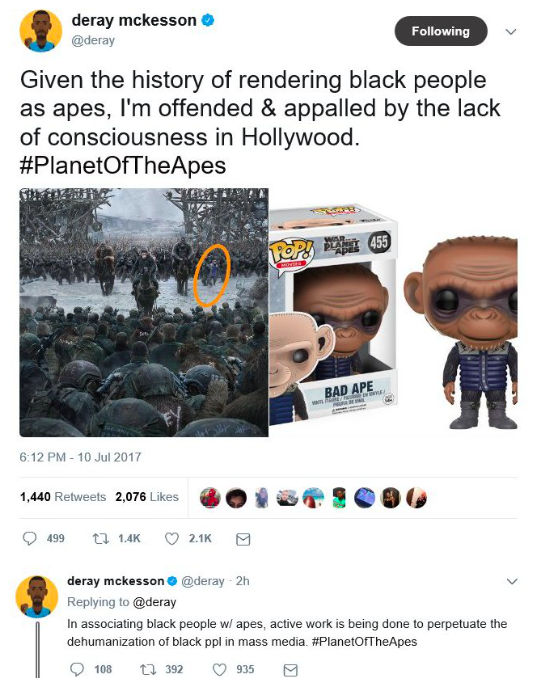 He wasn’t the only one to notice the vest and assign racism to it.

Does the new Planet of the Apes poster have racially coded messages?Notice the #BlackLivesMatter symbolism.Notice the ape with the blue vest pic.twitter.com/8dnr42OxjK

McKesson was reminded of how the “look,” as it were, was from the original move in 1968 and deleted the tweets, but the Internet is forever.

You’re outraged because they’re recreating the look of the original ape in 1968. You don’t own wearing blue vests man. Grow up. pic.twitter.com/XF9b0DurVt

Others took to mocking the Baltimore school system employee for his arrogance.

War For The Planet Of The Apes pays homage to the original design of the ape’s jackets. Narcissist DeRay thinks it’s about him. pic.twitter.com/xdHkYMBceC

Can’t believe a movie from 1968 was mocking Deray and BLM. How did they know? pic.twitter.com/1hAt6InY0L

In which @deray unwittingly culturally appropriates the style of a chimp from #PlanetoftheApes, gets offended about it and cries racism. pic.twitter.com/YX9dPYqKLF

There’s some serious narcissism involved in assuming a film w/ hundreds of millions at stake would think about how they might offend Deray.