“What we’ve seen today is Shakespearean in tragic terms for the country. …Exposing this email on the President’s son just puts a freeze in the stomach of everybody who’s in the White House whether they’ll admit it or not.”

“I know Hannity’s not a journalist, but what I wouldn’t give to hear him ask Trump Jr what his definition of collusion is. Hannity says he’s exhausted all the questions he can think to ask Trump Jr. A deep, deep reservoir there.”

— Jared Yates Sexton, whose work has appeared in NYT, Politico and The New Republic.

“Hey, so don’t get me wrong. I am incredibly happy that the president’s son, um, tweeted out proof of collusion.1/ It’s just so bizarre. As an independent journalist you work crazy hard hoping something will fall into your lap and…he tweeted it? 2/ And it’s so strange. Last year there were those of us who were all over this story and being called paranoid. And now…this? 3/ I mean. He just tweeted it. Like it was nothing. Like, it was just another Tuesday. 4/4 …Like, so many people out there were trying to track this down. And it just…got delivered on a tweet. What the hell.”

The argument came after what was supposed to be a private, internal convo within Breitbart seemed to indicate that Kassam, Breitbart News‘s London Bureau Chief — who lives in Washington — said Don Jr.’s meeting with the Russian lawyer was “straight up collusion.” He has since explained it was tongue-in-cheek. More of this crappy argument is explained here.

Kassam: “The Caller story came out & I sent them my thoughts. I don’t even know anyone there. Do u never tire of being a lying scumbag @OliverDarcy. …That’s not the Breitbart response Liar Darcy. It’s mine. You never asked me for comment. You lied about what I meant. …Breitbart rightly refuses to dignify Darcy with comment. I on the other hand have no problems being undignified.”

Darcy: As my story states, and as I explained to you last night, I did reach out for comment. Breitbart’s spox declined on behalf of company & you.

Kassam: Creepy Darcy thinks I need someone to speak for me. CNN are so dumb. As if activating enemies like me is what they need right now.

Sunny Ray Stelter is ready for her closeup

while y’all were hyped about emails… pic.twitter.com/esHdYdhwiF

“I left my wallet in a Target shopping cart tonight (mom brain) and a wonderful gem of a human turned it in. America is already great.” — NY1’s Jamie Stelter, wife of CNN’s “Reliable Sources” host Brian Stelter.

WFB reporter Brent Scher challenged WaPo‘s assessment and bashed the writing: “Actually pretty good’ is such a stupid way to describe something that would obviously be good.”

The Blaze gets a new weekend editor

“I am excited to announce I have accepted a position with @theblaze as their Weekend Editor! I’m looking forward to the new challenge!” — Beth Baumann, who is based in Potato Country, Idaho otherwise known as Coeur d’Alene. She previously worked for Bearing Arms.

“I had a delicious dinner tonight but I didn’t take pictures and post to social media; did it really happen?” — Kelly Jane Torrance, writer, editor.

A few details… He loves Cuban food. He played trombone at Juilliard. And oh yeah, he has defended mobsters.

Washington Examiner politics editor could give two shits about this

Rosie Gray is a writer at The Atlantic. 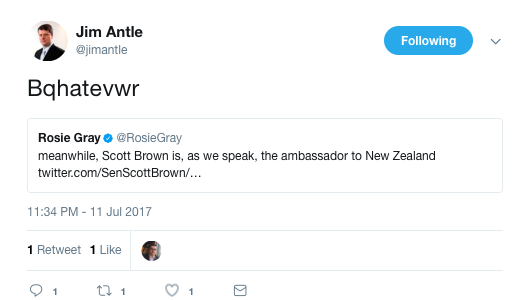 “We’re not telling the President what to tweet or not tweet.” — Jay Sekulow, attorney for President Trump on CNN Tuesday night.

Correction: In a few references to Breitbart News’s London Bureau Chief Raheem Kassam — who naturally lives in Washington — I spelled his last name Hassam. So he became pretty hostile on Twitter about it because God help anyone who ever screws up this important man’s name. The above has been changed to reflect the correct spelling of the asshole’s name.