Gender studies is having an impact on academia even in scientific fields where the subject plays no role. As The Daily Caller reported in May, a University of Hawaii professor put out a call for math departments and universities to stop hiring “cis white men.” Her curriculum vitae (CV) shows the seriousness of her article.

The Daily Caller discovered Piper Harron’s publicly available curriculum vitae, which reveals the seriousness of her call to arms against “cis white men.” Referring to herself as a “Liberated Mathematician,” Harron lists her educational experiences as a tale of hardship and survival. 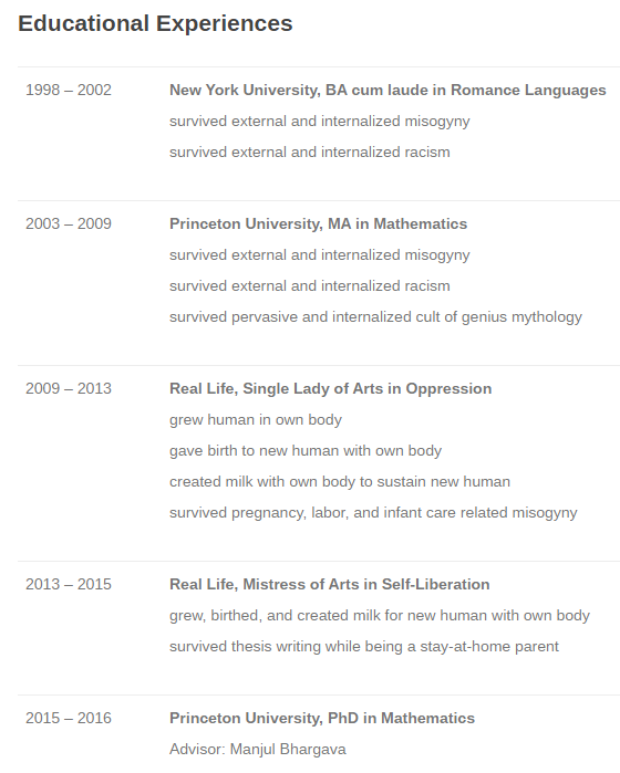 She also lists a series of “Denied Awards and Recognition.”

Writing on the official American Mathematical Society blog, the intersectional feminist writer Piper Harron asked for men to “quit your job, or at least take a demotion,” in a post titled “Get Out The Way,” (a reference to Ludacris’ popular hip-hop track)

“Statistically speaking, you are probably taking up room that should go to someone else. If you are a white cis man (meaning you identify as male and you were assigned male at birth) you almost certainly should resign from your position of power,” she continued. “That’s right, please quit.”

Harron suggested that if it’s too difficult for working mathematicians to quit their jobs, they should step down from any hiring or curriculum committees they’re on and to “make sure you’re replaced by a woman of color or trans person.”

Can you imagine quitting your job to make a statement for social justice and putting yourself and your family out on the street? Neither can the University of Hawaii professor.

“I know you’re not going to quit your job, but I want you to understand that you should,” wrote Harron. “And to understand that by keeping your job and your other unearned privileges, you are running a continued debt to marginalized people and you should always be seeking ways to pay us back.”

The editor-in-chief of the American Mathematical Society blog has since released a disclaimer on the article to state in explicit terms that the organization has no plans to fire anyone or act on Harron’s proposals.