Dan Rather, the former CBS News anchor who resigned in disgrace following a retracted hit piece on George W. Bush, has resurrected his career in the Trump era as a consistently harsh critic of the president.

Rather, once again a recurring figure on television, is often found making grave statements about Trump’s Russia ties and battles with the media. Much like the president, Rather has had success at grabbing headlines with emotional and often alarmist social media posts. Rather regularly (sometimes multiple times a day) crafts emotional, anti-Trump Facebook posts that go viral thanks in part to a tense media environment centered around the president.

In August 2016, roughly four months before the election, Rather went on what USA Today described as an “epic Facebook rant” after Trump said the “Second Amendment people” would keep Hillary Clinton from abolishing the Second Amendment. Many in the media portrayed that comment as a threat. Rather’s Facebook post — in which he urged journalists to abandon objectivity in covering Trump — received approving coverage in the media.

“Former anchorman Dan Rather has issued a challenge to his colleagues,” is how CNN’s Brian Stelter described Rather’s screed against objectivity. Stelter added that Rather seemed to be “agreeing with what a number of media critics have argued recently: That Trump cannot be covered and treated like a ‘normal’ Republican or Democratic candidate for president.”

Stelter has periodically invited Rather onto his Sunday show, “Reliable Sources.” In a post-election appearance on the show, Rather said that Trump’s victory proved that journalists “didn’t do our job as well as we could have and should have,” calling Trump’s election “gut check time for the press.”

In another “Reliable Sources” hit in April after Trump ordered a missile strike in Syria following the Assad regime’s use of chemical weapons against civilians, Rather lectured other journalists against describing Trump as “presidential.”

“Dropping bombs, having missile strikes doesn’t make one presidential,” Rather said. “It’s easy to drop bombs, it’s easy to put missiles off. What comes after that, dealing with what comes in the wake of that is much more difficult.”

Stelter declined to comment on the record for this story.

“On paper, as a package, he looks like presidential material,” Rather said of Obama in his 2012 book, “Rather Outspoken: My Life in the News.” Rather’s critiques of Obama focused on the Democratic president not doing enough to push back against Republicans in Congress, which he chalked up to Obama “underestimating the adversarial determination and solidarity of the Republicans.” 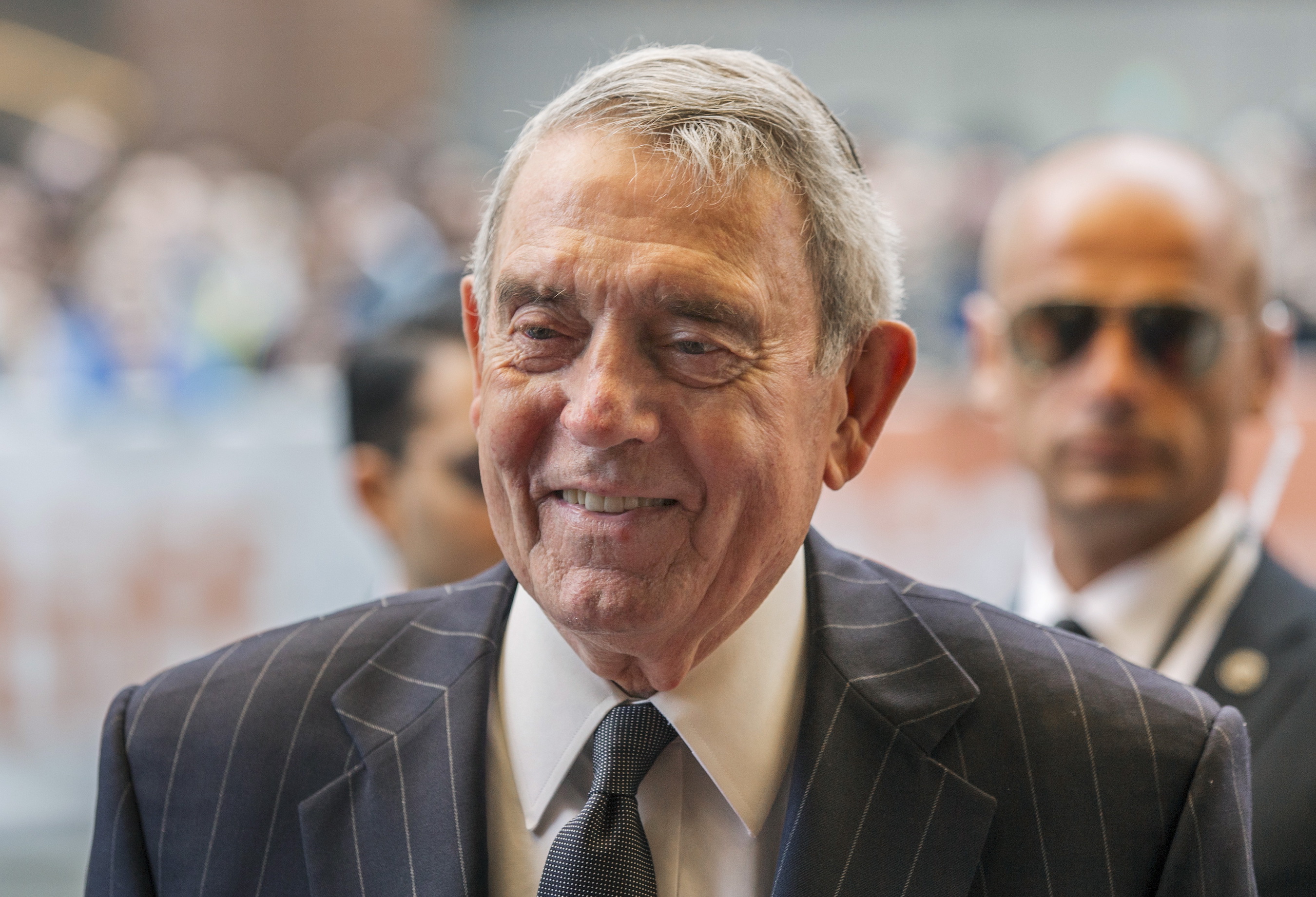 Dan Rather arrives on the red carpet for the film “Truth” during the 40th Toronto International Film Festival in Toronto, Canada, September 12, 2015. REUTERS/Mark Blinch

Stelter, Don Lemon and other CNN hosts have consistently given Rather a platform from which to lob criticisms of President Trump, as have the liberal hosts on MSNBC.

In an appearance on MSNBC’s “The Last Word” with Lawrence O’Donnell last month, Rather made headlines for claiming Trump fulfilled his campaign promise to withdraw from the Paris Accords because he was “lashing out in anger” and “psychologically troubled.” Rather added: “History will punish Donald Trump for this decision.”

Rather has consistently provided alarmist commentary on the ongoing investigation into Russian meddling in the 2016 election. Last month Rather called Russia’s hacking of the DNC and John Podesta a “cyber Pearl Harbor,” which conservative commentator Charles Krauthammer described as a “deranged analogy.”

Rather’s re-emergence as an ostensibly credible political figure is a clear example of liberal media bias in the age of Trump, said Tim Graham, director of media analysis at the conservative Media Research Center, a media watch dog.

“The first word that comes to mind is mind-boggling,” Graham said of Rather’s return to the spotlight. “It’s like, ‘let’s go for diet tips to a 900 pound man.'”

“Brian Stelter and [MSNBC hosts] Rachel Maddow and Chris Hayes all match this notion of Rather that it’s the media’s job is to crusade,” Graham added, saying that “Dan Rather the watchdog goes away” during Democratic presidencies.

“The emergence of Rather represents the liberal media arrogance that it is the media’s job to crusade. They are all so exercised over Donald Trump. They believe, they see the Trump’s election, the Trump administration as an ongoing national emergency and a moral 9/11,” Graham said. “Rather fits that. Rather is an overly emotional doofus. He is not a smart person.”

Smart or not, Rather doesn’t appear to be going anywhere.

“The questions are obvious. The answers are wanting. We the American people deserve to know what in God’s name is happening. Our legal system demands a presumption of innocence until the evidence proves otherwise. But the evidence is piling up,” Rather wrote on Facebook following the news that Donald Trump Jr. met with a Russian lawyer to try and obtain dirt on Hillary Clinton from the Russian government.

“I have been around a long time. I like to think I have seen a lot. But the revelations of the emails that set up the meeting between Donald Trump. Jr. – and let us not forget both Paul Manafort and Jared Kushner — with an agent of the Russian government is unlike anything I could even have imagined,” Rather declared. “There is still a lot that we do not know. But only a hypocrite, a cynic or a fool could argue that this development can be innocuously explained.” (RELATED: Everybody Is Forgetting That Clinton Allies Did The Same Thing As Don Jr.)

Rather appeared on MSNBC’s “All In With Chris Hayes” that same day to talk about his Facebook post, which was shared almost 30,000 times.

“There’s a question of patriotism involved here. And it is an immense political question for Donald Trump’s presidency right now because the hot breath of truth is coming down heavy on their necks just now,” Rather said.

MRC’s NewsBusters’ blog compared Hayes having Rather on to discuss ethics to “Bill Clinton discussing the merits of chastity or George Wallace explaining the importance of integration.”

Ultimately, Graham said, the fact that the journalists continue to portray Rather as a reliable source of information reflects negatively on the state of media today.

Dan Rather, Graham said, “is not a legend. He is an embarrassment.”