In its various permutations, Ruger’s Mini-14 has won considerable acceptance. Having come about in 1974, it’s considered a scaled-down version of the M14 and does have the same outward appearance and fire controls. Mechanically it shares the M14 operating principles, though it’s somewhat simplified.

“Tactical” versions with large-capacity magazines became available to military and law enforcement and the full-auto AC556 was a much-modified offshoot of the design. Bill Ruger was steadfast in maintaining the Mini-14 as a civilian sporting/utility arm and supplied them with 5-round magazines. Later, the Ranch Rifle designation and limited magazine capacity kept the model under the radar during the grandstanding Assault Rifle Lambada in the 1990’s.

Along the way, the 7.62×39, the .300 Blackout and relatively short-lived 6.8 SPC joined the .223 in the Mini-14 family. The Russian 7.62×39 entered the line in 1986 and the synthetic-stocked Tactical Rifle entry has a considerable following among deer and hog hunters, recreational shooters and those wanting a rifle for defensive purposes. Accordingly, Ruger introduced the Mini-30 Tactical in a stainless steel version at the 2017 SHOT Show.

Features differentiating the Tactical Rifles from previous Mini-14 generations include a flash hider, a shielded front sight and a ghost-ring rear aperture. A receiver-bridging accessory rail accepts a variety of optical sights and is “user-mountable.” There are sling swivels fore and aft, two 20-round magazines, Ruger 1-inch scope rings and a couple of Allen wrenches for sight adjustment. All these join the usual cable-lock and owner’s manual to complete the package.

Stan and the Mike (left) seem to have hit these 300-yard targets with almost every shot.

The trigger-blocking safety is in the front of the triggerguard a la M1 Garand/ M14. The action remains open after the final shot or can be held open via a plunger on the charging handle once the magazine is removed.

The Tactical Rifle rear sight adjusts for elevation and windage. One full turn of the front sight alters elevation by about 5 inches at 100 yards. Two opposing screws control windage and lock the sight in place. Although the rear sight is officially deemed a ghost ring, the sight picture closest resembles that of an M1 Carbine. It is quite usable in adequate light and at moderate distances.

I installed the accessory rail to accept my 30mm Leupold Hog Scope. The Hog Scope is a 1-4X variable with Pig Plex reticle. It did exactly what I thought a sight should do with this rifle/caliber package. It rides 2.5 inches above the bore’s center and the ballistic table I ran with the Hornady Zombie-Max loads resembled Hornady’s trajectory claims:

The data on two other domestic 7.62×39 rounds were practically identical to the Zombie load. All of them fed with total reliability. Fiocchi’s brass-cased, boxer-primed load constituted something of a bargain at $10 per 20 rounds, although it failed to cycle on several occasions—possibly because of its lower velocity.

Since 1991, the Mini-30’s internal barrel measurements have remained the standard-for-cartridge: 0.311-inch with 1:10-inch twist. Bullet diameter in SAAMI loaded ammunition is 0.310, as are current component bullets from Hornady and Speer. Fairly recent reloading handbooks from both companies list loads for the 0.308-inch bullets preceding the availability of the 0.310-diameter projectiles. There is a rumor from a credible source Ruger originally used barrels tapered from 0.311 to 0.308 in deference to bullet availability. Ruger technicians admit the possibility of this, but say there’s no written record to confirm or deny it.

More often than not, my 100-yard benchrested groups kept 4 of 5 rounds in less than 2 inches—with a fourth widening the group significantly. The outlying shot occurred at random and appeared so consistently that—in choosing my best groups with each load—I tabulated the results to include the full 5 rounds as well as the best 4. A couple of groups at 200 yards landed in 5 to 6 inches and confirmed the predicted trajectory. The rifle is fully suitable as a light big-game, large-varmint utility tool out to 200 yards. It’s also an effective defensive carbine at reasonable ranges.

New in 2017, the Stainless Ruger Tactical Rifle in 7.62×39 is a rugged, all-weather utility rifle in the most powerful caliber available in the Mini-14 series. The Leupold 1.25-4X Hog Scope is a good match for it.

Practicality is one thing but fun is quite another. Stan Jarosz’ shooting facility has an array of metal silhouettes dangling at ranges out to 300 yards. Sitting on the ground while using a truck tire for a back rest, I aimed at the center of the head of a 21-inch wide by 40-inch tall torso and hit shoulder high at 300 yards.

Thereafter I perched the head on top of the center crosshair and began clanging away. We took turns on another metallic sheep silhouette to its right. My first shot on the sheep was a hit with the point of aim over the back and about middle height on the curve of the horns. We took turns shooting randomly at either target. Solid hits imparted slight movement to the targets and frequently a polite clink was audible through my low-tech muffs.

Eventually the white ram got pretty well speckled. Close examination revealed we were all over both targets but had hit them almost every time. It would not do to shoot at game at 300 yards, but such performance would put a threat at grave risk.

The ghost-ring aperture rear and shielded post front combination yield a sight picture like an M1 Carbine. The front is fixed while the rear adjusts for elevation and windage.

The single design element causing me trouble is the necessity of rocking the magazine into battery instead of the straight-line insertion common to most magazine rifles. It’s likely a personal problem, but in any case, I’ve not yet mastered the drill. Another factor is the inexpensive imported steel-cased, Berdan-primed ammo. It’s crowded the SAAMI-approved rounds off the shelves in many local stores.

The Ruger is set up for optimum performance with more sensitive (likely softer) cupped boxer primers, so misfires with the Russian surplus and similar rounds are common. Ruger emphatically recommends against non-domestic ammo and the Internet-suggested rifle modifications aimed at improving ignition.

Ruger emphasizes only moderate lubrication is necessary. My rifle arrived dry and I found an application of lithium-based grease to the receiver significantly improved bolt travel. Full disassembly for cleaning is needed occasionally. Attention to bore and chamber do not depart from the norm and the gas system appears to be either self-cleaning or resistant to fouling.

The only tool needed is a screwdriver to spring the rear of the triggerguard out of the action. Following the manual helps get the job done and the process becomes easy with repetition. Getting the slide spring stuffed back into the slide, however, is hard enough to elicit moderate cursing and likely to remain so.

Better yet: Click here to get GUNS Magazine delivered to your door. 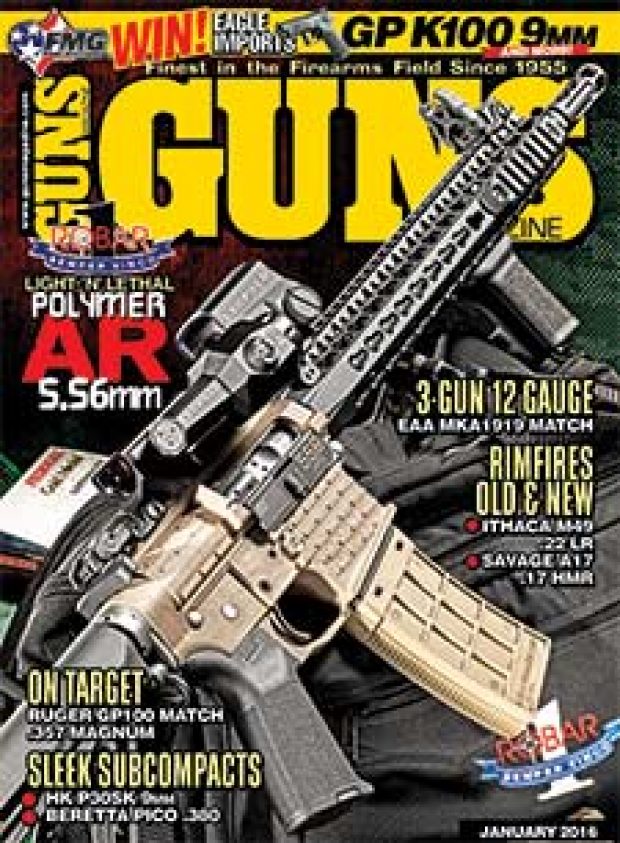