Even before she was divorced, MSNBC “Morning Joe” co-host Mika Brzezinski rarely mentioned her attractive ex-husband Jim Hoffer over the years. You knew he existed. But it was well outside the realm of the “Morning Joe” bubble.

Now that their 23-year marriage is over, she has made it a point to bring him up.

She retweeted two stories from Hoffer, a WABC Eyewitness News investigative reporter in Manhattan, concerning a Brooklyn baby being quarantined after possibly being exposed to the measles on an airplane. 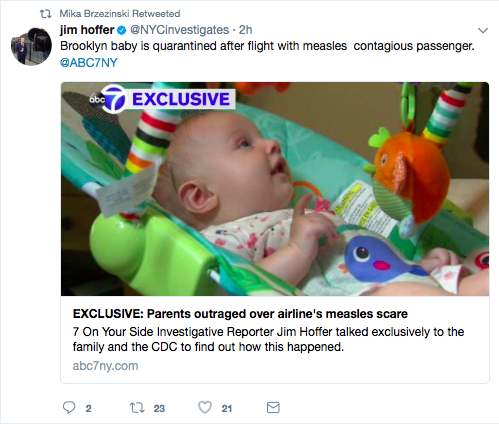 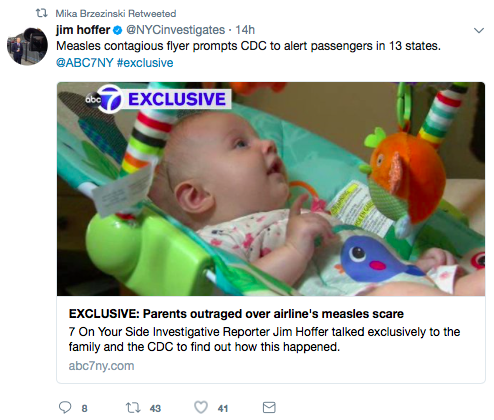 The last time Mika brought up Hoffer was about two weeks ago.

When she and her new fiancée Joe Scarborough appeared on their own show to react to President Trump‘s infamously nasty tweets about Mika supposedly bleeding from her chin after a face-lift, the topic of the National Enquirer came up.

Host Willie Geist bent over backwards to make the whole thing comfy for them. Since this wasn’t a real interview, he told them to discuss their experiences with the supermarket tabloid to the extent that they were comfortable.

As their story goes, the mag harassed Mika’s daughters and her and said they were going to run a hit piece on them unless they groveled to Trump for the show’s poor coverage of him and begged him to have the story spiked.

Joe and Mika refused to apologize to Trump.

They also threw around the word “blackmail.”

Scarborough later said he had texts and phone records from Trump’s aides. The tabloid allegedly pinned the hit piece on none other than Hoffer. “Which I knew he’d never do,” Mika exclaimed.

They couple ultimately called the mag’s bluff, saying fine, publish it. “Screw it. Run it,” Mika said. Which the National Enquirer did in early June, calling the couple “sleazy” for cheating on their respective former spouses.

The tabloid again splashed the story on its homepage on June 30 — the very day Joe and Mika appeared on their own show to assure viewers that they were okay.