Cartels are notorious for hiding drugs in every nook and cranny of sedans, trucks, and SUVs, and a study released Monday reveals the top 10 places they use the most.

Detox.net released a study to The Daily Caller News Foundation Monday finding that U.S. authorities seized 1.5 million pounds of illicit substances in 27,731 seizures in 2016. The study revealed 74 percent of drug trafficking arrests involved a sedan, pickup truck, or SUV, and the average amount of drugs found per seizure was 109lbs for marijuana, 48 oz. for heroin, 11 lbs for cocaine, 9 lbs for methamphetamine, and .3 lbs for ecstasy.

Here are the top 10 places where cartels hid the drugs:

The gas tanks makes it nearly impossible to find the drugs manually and the stench of gasoline goes a long way to stopping up the noses of search dogs.

#2. Inside the back seat

Inside the cushion with the seat sewn back together and probably covered with some luggage.

The firewall inside of a car’s engine block makes it almost impossible to reach and, like the gas tank, it’s hard to smell drugs there. 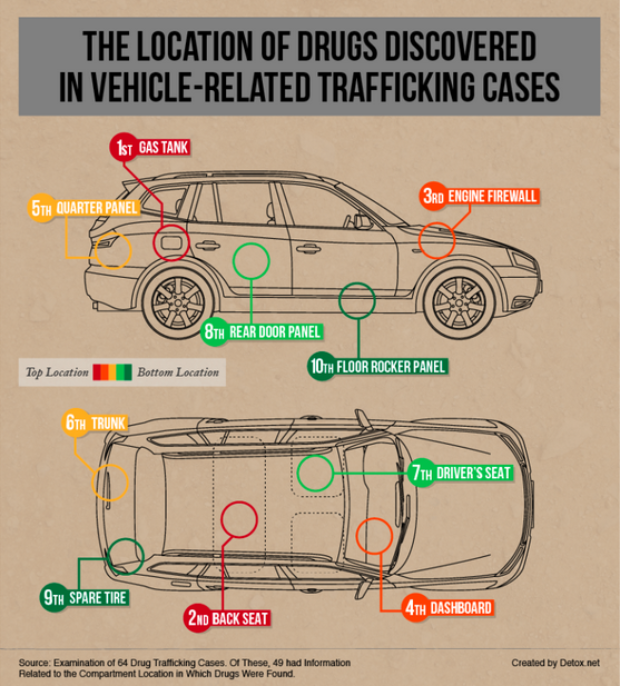 Be it behind the radio dials or in a false back in the glove compartment, cartels love to move drugs in their dashboards

Cartels use the insides of many exterior panels to hide illicit substances since the factory-created open spaces don’t require them to change a thing.

According to the study, cartels make a slew of secret compartments hidden all around their vehicles, including under the trunk.

#7. Under the drivers seat

Driving across the boarder sitting on a false cushion filled with tightly wrapped drugs is apparently a favorite activity for cartels.

#9. Inside the spare tire

Under the car and encased in rubber and the appearance of innocence, drugs inside the spare tire are actually a pretty good idea.

#10. Inside the floor rocker panel

Here’s what a floor rocker panel is, in case you were wondering.