The devil is in the details — in this case, literally.

The insult surfaced in the spring of 2016. One by one, Donald Trump was knocking down his opponents and becoming the GOP nominee.

But Speaker Paul Ryan was still a dream for some Republicans, who couldn’t stomach the thought of a Trump presidency. Green writes that this “sent Bannon into a panic.”

Breitbart News Chairman Steve Bannon wasn’t yet working for Trump as his chief strategist. But Matthew Boyle and other Breitbart reporters there were busy writing scathing stories about Ryan under Bannon’s direction. But he really didn’t have to push too hard. In May, ex-Breitbart reporter Lee Stranahan told Vanity Fair that Boyle had “fetish-ized going after Paul Ryan. I don’t know how else to put it, it’s just complete obsession.”

Bannon’s remark is at least comparable to Trump’s “grab ’em by the pussy” remark.

But the bright side? At least he’s not jokingly condoning sexually assaulting women.

Green wrote that Bannon called Ryan “a limp-dick motherfucker who was born in a petri dish at the Heritage Foundation.”

Heritage is a well-known conservative think tank in Washington. 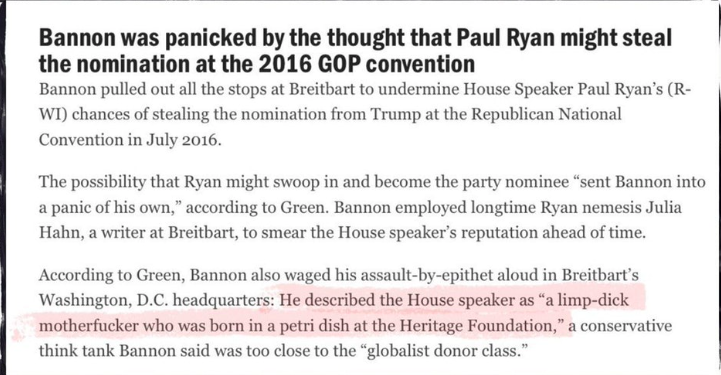