HAVANA — Oscar Hernandez could have finished his bachelor’s degree, but instead he elected to drop out of college to drive a taxi cab around Havana.

The choice for Hernandez was simple: in Cuba, cabbies can earn way more money in a single day, or even one trip, than government employees make in a month.

Oscar did a quick cost-benefit analysis and realized his career as a government psychologist would pay significantly less than driving people from point A to point B every day for the foreseeable future. 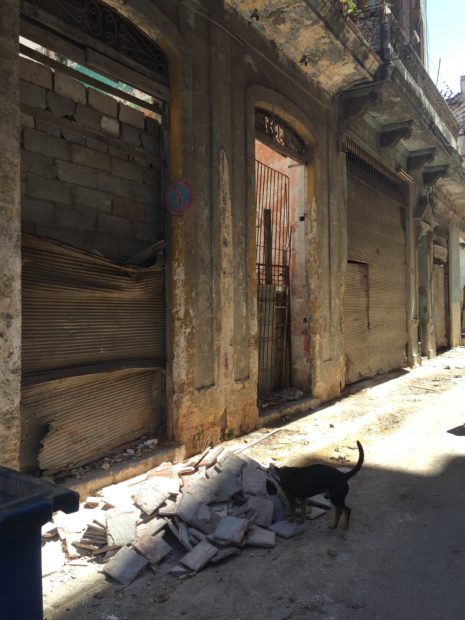 “The government would only pay me $15-20 a week to work as a psychologist,” Hernandez told The Daily Caller News Foundation as he sought shelter under an umbrella to protect him from the intense, unrelenting rays of the tropical Havana sun. He received 20 Cuba cucs — the Cuban currency which translates roughly at a 1:1 rate with the U.S. dollar — in one 20-minute cab ride with the TheDCNF and other reporters.

Stories similar to Oscar’s are not uncommon in Cuba, citizens eschew professional fields for higher paying, lower-skilled jobs. Entrepreneurs have the potential to earn up to 250 percent more a month than those that work for the government.

Standing some 300 yards away from the spot where former president of Cuba and revolutionary leader Fidel Castro used to give 8-hour long, exhaustive speeches, Hernandez explained the mentality of people in Cuba. He said they are ready to move away from Castro’s ruinous communist regime and are increasingly favorable to a more western, capitalist economic system.

The Cuban government touts the island nation’s burgeoning private sector as evidence of its progress in moving away from a regime that has historically kept its people firmly under government control and in back-breaking poverty, but it still has a long way to go in terms of balancing the opposing forces of state and private enterprise.

An individual can currently, under Cuban law, legally purchase an apartment for personal or business use. Yet, the lines between what is privately-controlled and what is government-owned is largely difficult to ascertain. A company can own an apartment or physical space in which it does business, but it relies on the government to acquire most of its inputs. If the government does not have what a business needs, it often times must seek black market goods or import them–an incredibly costly endeavor.

Like the communist regimes of North Korea or the former Soviet Union, Cuba historically has tried to institute a command system wherein the government controls all means of production, an economic scheme that has historically failed and left its economy and its people worse off. 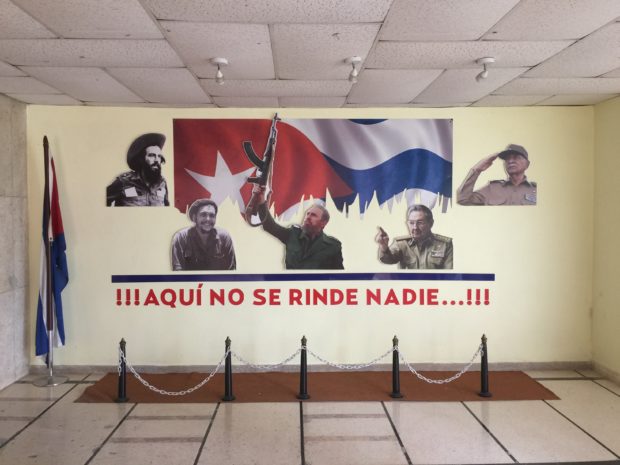 Leaders of the communist revolution are depicted on the wall at the Havana Ministry of Transportation. (Robert Donachie/ Daily Caller News Foundation)

Small businesses on the island are subject to some extraordinarily high taxation rates.

The government taxes business owners’ income on a month-to-month basis at 10 percent. That is to say, every month a business must cough up 10 percent of its earnings to the communist run government. On top of these monthly taxes, businesses are required to pay 50 percent of their annual net-profit to the state.

Cuba’s “non-government sector,” which is what Cuban government officials call its private sector, includes some 500,000 entrepreneurs that are operate largely outside the bounds of government. 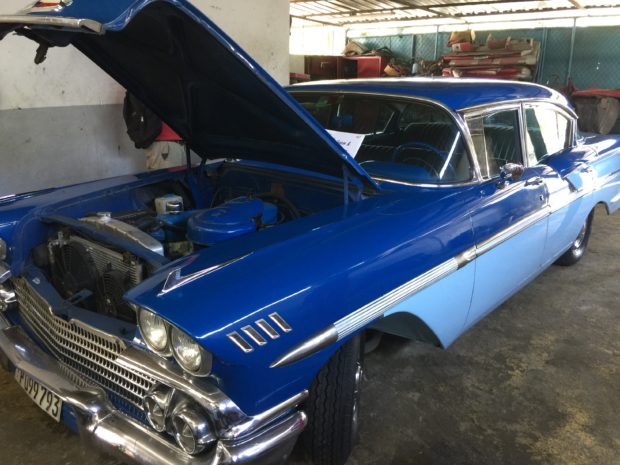 While the conditions are not ideal for those trying to operate a business in the alleged private sector, the opportunities to make a better life for oneself and one’s family are incontrovertibly better than trying to make a living as a government employee.

Cuba used to have a thriving private sector dating back to the early-1950s, when it was a hot spot for vacation as a tropical getaway for families. The island hosted celebrities like Frank Sinatra and had first-rate resorts and high-class restaurants and bars. Cuba was what Las Vegas has become to Americans today.

The political and economic future of the island changed forever on Jan. 1, 1959, when Castro drove Cuban dictator Fulgencio Batista from the nation and took the reigns as the leader of Cuba. In less than a decade, Castro had usurped control of nation’s private sector.

In 1968, during the year of Cuba’s “Revolutionary Offensive,” Fidel took aim at the nation’s private sector. He called the owners of the nation’s private businesses “a class of parasites” who merely “prosper from the work of others,” and, according to Castro, it was vital for the communist revolution to rid itself of these drivers of inequality “to finish making a revolutionary people.”

With those words acting as the impetus, the government moved to take control of privately-held businesses, from restaurants to bars to storefronts. Over the course of the next 50 years, the government attempted to centrally plan the economy. The Castro regime set prices, issued mandates regarding production and employment levels, allocated resources as it saw fit and owned all means of production for Cuban businesses.

The only sector that remained somewhat outside government control were small farm cooperatives, which were still very limited in the scope of what they could and could not do under law.

After the fall of the Soviet Union in 1991 — which Cuba relied upon nearly exclusively to prop up its economy after former President Dwight D. Eisenhower instituted an embargo on business, investment, trade and travel with the island nation in 1960 — the Cuban regime started easing strict state control over the economy. Some 85 percent of Cuba’s net trade was with the Soviet bloc of nations and U.S. embargo compounded its problems.

Cuba experienced one of its worst economic periods under the Castro regime during this time, Collin Laverty, a leading expert on Cuba and U.S.-Cuba relations, explained to TheDCNF.

Between 1989 and 1993, the nation’s economy felt the immediate impact of the fall of the Soviet block of nations. The Cuban economy contracted 35 percent, with imports falling 75 percent and the nation’s federal deficit reaching 33 percent of its GDP. Large-scale, rolling blackouts affected neighborhoods several days a week and public infrastructure, already plagued by the ills of 30 years of isolation, continued to worsen, as government officials scrambled to find a way to mitigate the damage.

The Castro regime eventually responded by legalizing hard currency, lowering barriers for tourist travel, opening itself up to other types of foreign investors, like Great Britain and Germany, and other measures meant to give the economy a much-needed boon. These measures were not enough to regain the losses from the early 1990s, only working to raise GDP 14.1 percent from 1993-1997.

The government remained largely opposed to allowing private businesses to operate in the nation throughout Fidel’s rule, which officially ended in 2008. Cuban Economy Minister José Luis Rodriguez said in February 2001, “we don’t see that our country’s development rests on self-employment or small private property holders.”

Under the leadership of President Raul Castro in 2011, the government loosened many of the restrictions on licensing and property ownership, which allowed for enterprising people to acquire some market share from entities that were formally under state ownership. Raul is expected to step down as president of Cuba sometime in 2018, but his replacement is yet to be announced. 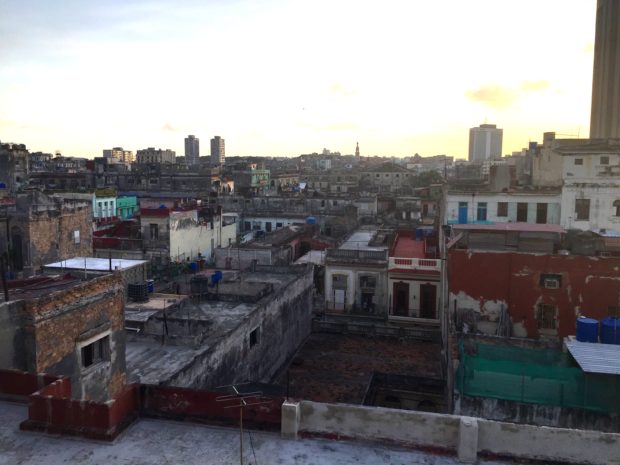 In nearly all indicators for living-standards, Cuba has made slower-than-anticipated economic progress. The nation has a housing shortage upwards of 700,000 units, and even with free health care, education and other public services that are government provided, public employees continue to struggle to make ends meet on their meager government salaries.

Despite its economic woes and uncertainty for the future of its own leadership, one thing remains blatantly clear among those pursuing entrepreneurial ends in the nation: a sense of optimism for the future and a renewed hope that they can have a better life.