North Korean state-run media hinted that Hawaii and Alaska may be potential targets for an unlikely missile strike against the U.S.

“Hawaii, where the U.S. Pacific Command (USPACOM) is stationed, and Alaska,” where part of the U.S. missile shield is based, are in range of North Korea’s missiles, the Rodong Sinmun wrote Sunday, according to NK News. North Korea successfully tested the Hwasong-14 intercontinental ballistic missile earlier this month, and the weapon is believed to have a range between 4,500 and 6,000 miles, which would give Pyongyang the ability to strike targets in Hawaii, Alaska, and possibly even parts of the West Coast.

The odds that North Korea would launch a strike against the U.S. are low, as doing so would be suicidal. North Korea would probably only use its ICBM in the event of a conflict or if the regime was collapsing, according to high-level defectors and leading experts. Nonetheless, North Korea is clearly preparing for the possibility.

North Korea offered valuable insight, either intentionally or unintentionally, into possible targets in the U.S. several years ago. 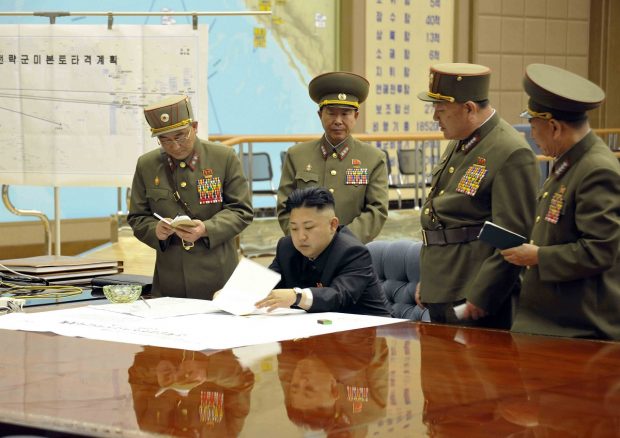 North Korean leader Kim Jong-un presides over an urgent operation meeting on the Korean People’s Army Strategic Rocket Force’s performance of duty for firepower strike at the Supreme Command in Pyongyang. The sign on the left reads, “Strategic force’s plan to hit the mainland of the U.S.”. REUTERS/KCNA

A map, which some analysts call the “map of death,” can be seen in the background of a propaganda photo. The map appears to identify multiple targets in the U.S. that North Korea might strike in the event of a conflict. 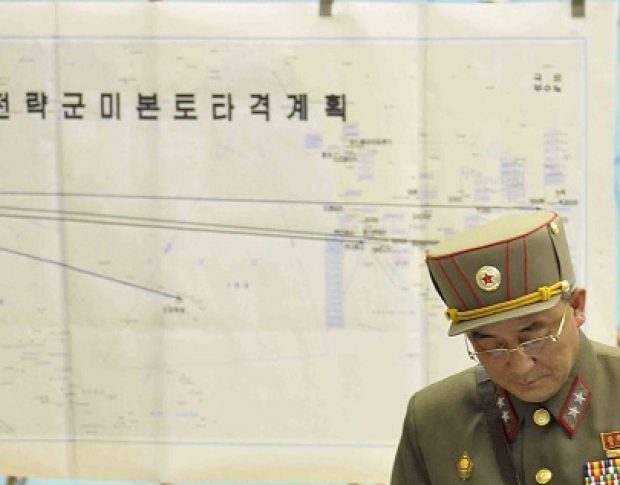 Map from the meeting (Reuters via KCNA)

Open source intelligence analysts suspect that the four targets identified on the map are Hawaii, San Diego, Barksdale Air Force Base in Louisiana, and Washington, D.C. U.S. Pacific Command is headquartered in Hawaii, and the home base for the Pacific Fleet is in San Diego. Barksdale is the headquarters for Air Force Global Strike Command, which is responsbile for U.S. nuclear deterrence and global strikes, and the Department of Defense and a few other national security agencies are located in D.C.

Some other analysts add Offutt Air Force Base in Nebraska, where U.S. Strategic Command is located, and Whiteman Air Force Base in Missouri, home to nuclear-capable B-2 stealth bombers, according to The Washington Post.

The U.S. is boosting its defenses as North Korea advances its missile program at an accelerated rate.

The U.S. has conducted several missile intercept tests in recent months. The U.S. military intercepted a mock ICBM in a test of the ground-based midcourse defense (GMD) system in California in May and an intermediate-range ballistic missile in July using a Terminal High Altitude Aerial Defense (THAAD) anti-missile system in Alaska. Another test of the THAAD system, which is operational in South Korea, is expected sometime in the next week or so.

Hawaii has released an emergency response plan for a possible strike on the Aloha state, and some state legislators and a U.S. admiral have called for improved missile defense capabilities to better protect the island state from an attack.