As an aviator from age 22 on, I was subjected to eye exams every year. For many years, the results of those exams revealed 20/20 vision in my right eye and 20/15 in my left eye. I never associated how the difference might affect my shooting.

The first time I pulled the trigger on a real, loaded gun, it was my father’s 16 Gauge Model 12. I was seven years old and on the way to squirrel hunt in the woods with my handed-down, single-shot .410 on my shoulder — not loaded. Doves were also in season. After making sure I understood we don’t normally shoot at doves unless they are in flight, Dad made an exception and allowed me to take a shot at one sitting on a limb. Because his gun was loaded and mine wasn’t, he traded guns with me for the shot.

To this day, I still remember seeing the bird flying off and pieces of bark falling to the ground while I tried to figure out what had just punched me in the nose. I didn’t know enough to ask my dad, and he apparently didn’t notice anything out of the ordinary. It wasn’t until years later when I learned why my nose hurt that day. I was shooting right handed, but lining up the sights with my left eye.

I spent as much time as I could on the rifle range at Boy Scout camp the summer of my 11th year earning the series of NRA Junior Marksman awards using a Remington 514 bolt action rifle. I learned to love that rifle even though the sights appeared to be off. I knew I could aim 4″ to the right and 2″ up and hit the bullseye. The next summer I worked on staff at the camp, and at the end of the season I was able to buy my favorite Remington for $2 when the camp decided to replace it with a newer model. Sure the sights were off, but I knew how to compensate. Besides, another $4 got me a Marlin 70 to go with it, and I was sure the sights were fine on that rifle. Almost 50 years later I discovered the sights on the Remington were right on the money. It was my eyes that were causing me to aim high and to the right to hit the bullseye.

David earned his NRA Junior Marksmanship Badges at Boy Scout Camp with this Remington 514, because he learned how to compensate for its sights being off. It wasn’t until 50 years later he learned the sights were right on, it was his eyes that were the culprit.

It was when I attended an NRA Basic Pistol Instructor course I learned of the phenomenon called Cross-Eye Dominance. Before discussing the concepts of sight alignment and sight picture, the instructor took us through a test to determine which of our eyes was dominant. For me, it turned out to be my left eye, even though I’m right-handed. I was somewhat surprised to learn about this after a lifetime of shooting. There was no mention of it when I was learning to shoot an M-16 in the Army. It’s probably part of the curriculum now, but in 1969 when I went through Basic Training the concept was not mentioned, and probably not understood.

As soon as I could after discovering I am left-eye dominant, I took the old Remington 514 to the range and shot it left-handed. The sights were dead on. The compensating I’d been doing was because of my eyes, not because of the sights on the gun. No wonder Dad’s 16 Gauge shotgun nearly bloodied my seven-year-old nose. I was leaning way over it to get the sights to line up.

To begin the Miles Test for determining your dominant eye, find a small object across the room and encircle it with your hands fully extended.

While keeping the object centered, slowly bring your hands back to your face. The circle will come back to your dominant eye.

There are several tests you can do to determine your dominant eye. You would think right-handed, right-eye dominant, left-handed, left-eye dominant, but they aren’t related. A different part of the brain makes the determination.

The test we did during my NRA Basic Pistol Instructor class is called the Miles test. To conduct this test, you pick an object across the room, then extend both arms, bringing your hands together to create a small opening through which you view the object. With both eyes open, slowly bring your hands back toward your face keeping the object centered in the opening. If you do this correctly, your hands will bring the opening back in front of your dominant eye.

The Porta Test is done by pointing at a small object across the room with your index finger while keeping both eyes open. Close one eye, then open both and close the other eye.

We’ve put a little over 11,000 students through the Texas License to Carry class, and we do this exercise in every class. Our statistics pretty much match what I’ve read as far as national statistics. Approximately 30 percent of the general population is cross-eye dominant, with the percentage being a little higher among women. A small percentage of the population does not have a dominant eye.

A right-handed shooter will normally line his right eye with the sights.

A right-handed shooter who is left-eye dominant will simply need to rotate his head slightly to align his left eye with the sights.

Here’s what happens when David aligns his sights with the bullseye using his non-dominant right eye at a close range (12-15 feet). For other shooters the difference may not be as pronounced.

The Porta test was very helpful for me because it shows such a difference in where looking across the sights takes me with my left eye versus my right eye. And, as I’ve come to understand this aspect of our physiology better, it turns out my vision being sharper in my left eye is just a coincidence and has nothing to do with me being left-eye dominant.

I now shoot long guns left-handed, but I still use right-handed rifles and shotguns. I bought a left-handed Ruger M-77 a few years back thinking it would be just the ticket, but operating it was awkward. Operating a regular bolt action or lever action rifle or shotgun left-handed works fine for me. It took a little getting used to, but now I’m comfortable with it.

With a handgun, it’s important to line the sights up with the dominant eye, but if you’re cross dominant, you don’t have to change your shooting hand. Just rotate your head slightly. Don’t tilt it to the side, keep it upright and rotate it, like shown in the photos with the muzzle pointing at the (unmanned!) camera.

I wish determining eye dominance was all you had to deal with when learning to properly use the sights on a handgun. If you’re 21 years old with 20/20 vision, the sight alignment, sight picture basics are no big deal. But we live in a world in which people have near and far contacts, Lasik or Keratotomy surgery, and sometimes lens replacement surgery. Any of these may affect your ability to determine the best sight alignment strategy to use at near targets versus targets positioned further away.

When working with a new shooter, using a laser-only handgun initially is a good way to identify eye issues affecting sight alignment. If you do this indoors with a SIRT training pistol or LaserLyte Trainer, a shooter can work out a strategy to get a good sight picture at different distances. Understanding how your eyes work with your gun’s sights before going to the range can save you a lot of discouragement (not to mention money).

One recommendation I’ve seen in print is to use a bit of opaque tape over the lens on the non-dominant side of your shooting glasses. This would allow you to keep both eyes open, resulting in more light on the target which can help with depth perception. I’ve discovered in some lighting conditions, usually dim light on the periphery of the shooting area, the only thing that works is closing my right eye.

An instructor friend of mine who doesn’t have a cross-dominant eye issue tried to convince me if you line your sights up you’re going to hit the target regardless of which eye you use. Yes, that probably works if you totally close the eye you’re not using. I cannot close my dominant left eye by itself unless I hold it closed and when I’m shooting there is no extra hand available for that purpose. So, I use my left eye, and whether I leave my right eye open or close it, I am reasonably successful at hitting where I’m aiming. If I use my right eye with my left eye open, I shoot off to the left.

If you’ve never tested for your dominant eye, I suggest doing so. Having this information in your arsenal may just help you hone the sight alignment/sight picture aspects of the shooting basics so your rounds hit pretty close to your intended aiming point. 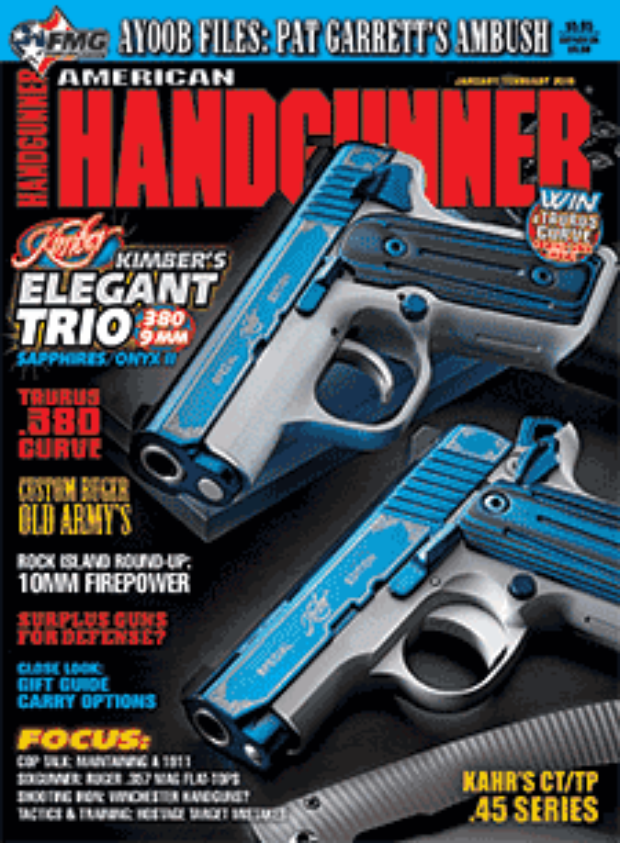