Stale cookies are no way to live. In real life (IRL) or on the Internet.

Kind of like when you’re craving some hot, fresh-from-the-oven snickerdoodles but the only thing laying around the house are some old Fig Newtons. Bleh.

It started out as all Benny stories do:  Benny was Bennying away on Twitter — this time mocking an ad placement on militarytimes.com — well, at least on his computer.

It was an ad for “The World’s Largest Gay Cruise” that appeared next to a story about President Trump‘s new transgender policy, which bans that community from serving in the military.  Only one problem: most visitors to the site weren’t dazzled by speedo-clad twinks looking for a hot time on the open waters. 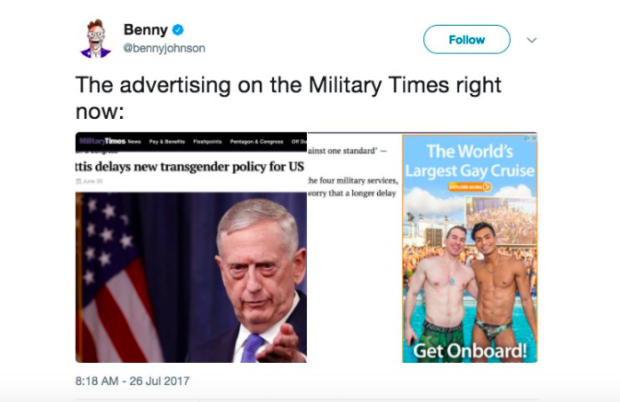 “It’s pretty fucking self-explanatory,” a coworker at The Daily Caller with knowledge of how ads are presented to readers explained. “It happens on 80 percent of websites. The ads are targeted because we don’t sell enough of our inventory to fill them all. You go to Amazon to look at something you didn’t buy and you go to another site and it pops up on another site to target you.”

In other words, your computer “cookies” hunt you down as you surf the Web.

The choke didn’t go unnoticed.  And the Internet went to work, dragging Benny’s hiccup with thousands of replies and retweets.

BuzzFeed‘s Saeed Jones, Johnson’s former coworker and the site’s executive editor of culture, made perhaps the biggest splash (speedos optional) with more than 5K retweets and nearly 20K likes at the time of publish: 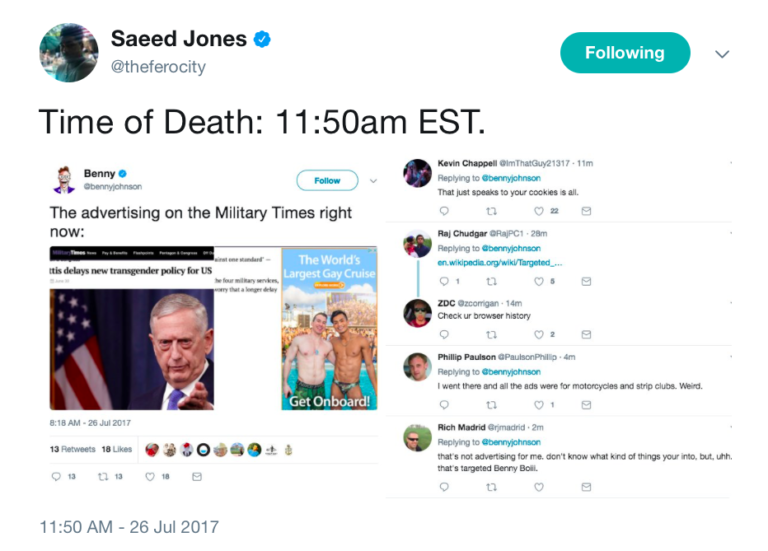 Johnson, who is wedded to a woman he married at a beachy wedding last November, deleted the tweet. And hours later he provided his critics with an excuse for why the ad appeared on his computer:

1. Spend all morning researching LGBTQ military policy for *this* piece.

While the man whose Twitter bio reads “makes internet all day day,” didn’t seem to understand the concept of cookies, he swallowed his pride and tried to laugh it off:

In honor of Benny’s blunder, I went on a crowdsourcing mission to find out what ads people saw when they went to militarytimes.com.

Hope Hodge Beck, a reporter for military.com, immediately accused me of being “unsavory.” What’s with all the cooking references?

A media friend and I exchanged ads that popped up on each of our computers for militarytimes.com.

The friend soon mocked my advertising bounty: what he called a “sexy Bernie Sanders pillow,” cat litter (which is for my dog, don’t ask!) and travel to Warsaw (??). We can’t all have cool ads for boozy brunches (you know who you are).

The ads that rolled in from my crowdsourcing expedition included hot pink sandals, Bad Idea T-shirts, upscale backpacks, Best Buy, retiring in Spain, and chess classes. But no one else got invited to “get onboard” a big gay cruise.

So what’s the moral of this story?  Whether it’s Bernie Sanders, boozy brunches or Best Buy that floats your boat, be careful what you Benny. Because the world might Benny you back.