The internet got set on fire yesterday when I wrote a piece criticizing the fact that America is beginning to glorify obesity and promote “plus-sized models.”

My article was simply suggesting that it’s perhaps not the wisest thing in the world to promote unhealthy habits, and that male consumers aren’t buying Sports Illustrated’s swimsuit magazine to see heftier women. They’re buying it to see women in skimpy bikinis.

I even acknowledged the fact that I’m not exactly in the greatest shape in the world. Props to me for being willing to admit that to millions of readers. Most men would never have that much stunning bravery, and I’ll take a 24-pack of Miller Lite over six-pack abs any day of the week.

Well, as I’m sure people can imagine, some were not pleased. Others wanted to let me know that I’m fat.

Stop making fun of people who is more attractive than you. Nobody likes you.

Good thing you have that belly to rest your guns on…

Hey David,
The guns and cigar won’t make your dick any bigger. We know it’s small.

Lets address the “David Hookstead is fat” narrative that seems to be spreading like wildfire. It’s all because of this photo I took at a gun range. 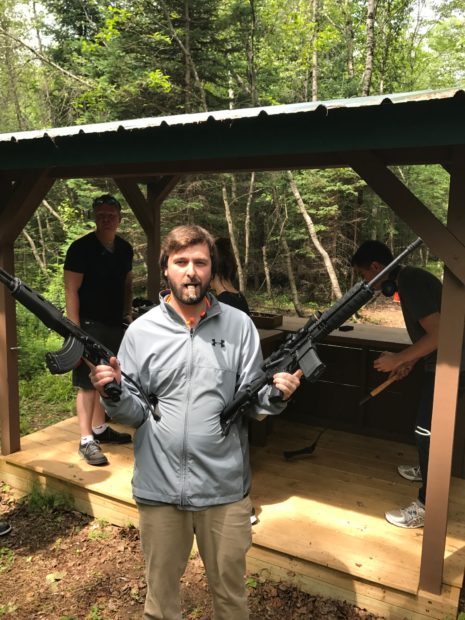 First things first: yes, I’m not exactly LeBron James or Calvin Johnson when it comes to my physical makeup, but that photo is still awesome. Two rifles, a cigar and a gun range. It doesn’t get much more American than that. So, for all the haters and losers out there, when you say you hate this photo what you’re actually saying is that you hate America. Let that sink in.

Secondly, for all the critics who wanted to take shots at more personal things on Twitter, I’ll let Kenny Powers speak for me on that one.

I guess I shouldn’t have expected much more out of the internet. I suppose in our culture of immediate satisfaction I should have known some wouldn’t read past the headline or listen.

I’ll continue to speak the truth, I’ll continue to hold guns while I smoke cigars and I don’t really care if people don’t like it on Twitter. Next time they want to come at me I suggest they bring some facts along with them instead of just the rage of the internet.

In closing, here are some photos of models I actually want to see, and if you don’t like it then I suggest you sack up or get the hell out of America.