In just a few weeks, The Verge covered KFC’s attempt to launch a chicken sandwich into the stratosphere multiple times. The initial post revealed the sponsored collaboration between Vox Media’s sales team, Vox Creative, and KFC — stating that it did not involve editorial staff of The Verge.

Three further articles covering the event were published independently of the sponsored post, prompting questions about the publication’s journalistic objectivity.

The Verge posted regular updates on the event page, titled “Inside the mission to send a chicken sandwich into space.” It even linked to yesweareactuallysendingachickensandwichto.space—which redirects to KFC’s official website. The advertisement showed a 3D rendering of a satellite dressed up like a chicken bucket. It’s worth noting that the branded content was not posted by The Verge’s editorial team and labeled as an advertisement. 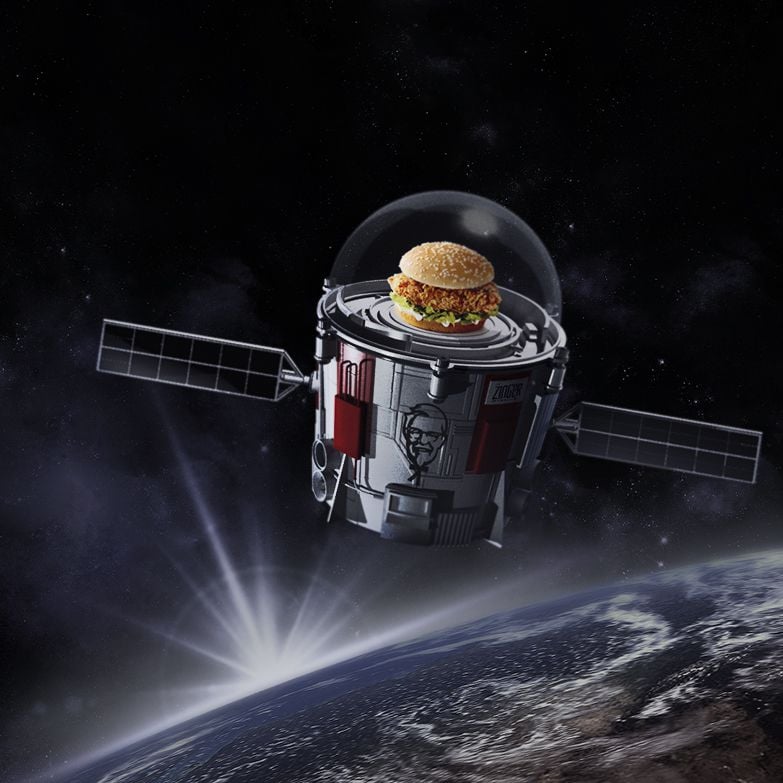 Of course, with reality being that much duller than the fantasy, the chicken sandwich never quite made it to space. Nor was it a satellite, for that matter.

The sandwich was, simply put, attached to an experimental balloon called the “Stratollite.” It was expected to reach travel for four days to reach a height of over 60,000 feet, but it failed after 17 hours of flight. The Verge claims it reached a peak altitude of 67,143 feet — but The Verge is the only source for that number.

The publication claims that the balloon’s peak altitude “has only been glimpsed by a select few.” Except this isn’t true either.

The Concorde can cruise at over 60,000 feet, and there’s little doubt that staff aboard the passenger jet served chicken sandwiches during its heyday. It’s also important to note that the difference between 60,000 feet and space is vastly different. It’s like comparing the height of a mouse to Michael Jordan. Talk about misleading advertising.

Hype aside, The Verge’s participation in KFC’s advertising campaign raises questions about the nature of the three articles. The publication covered the topic as a legitimate news event, and other tech websites regurgitated the stories to their respective audiences.

The Verge editor-in-chief Nilay Patel maintains that his publication’s editorial content is completely independent from any advertising on the site, and that the articles are genuine. “We have a strict wall between editorial and sales,” Patel told The Daily Caller. “It’s impossible to buy editorial content on The Verge.”

Patel insisted that reporters on The Verge’s space team covered the chicken sandwich launch independent of Vox Creative’s sponsorship deal with KFC. He stated that the branded page was appropriately labeled — which it is. It’s puzzling as to how a space-themed PR stunt qualifies as real news, however.

When pressed on the lack of disclosure in the three editorial articles, he referred to the ethics statement located at the footer of the site and said it was unnecessary to add any further disclosure as members of the editorial team have no knowledge of what the sales team is doing.

The page states that it does not accept payment from companies to write reviews or stories, and that all stories put forth by the company are based on editorial discretion and not done at the behest of advertisers or PR firms. “Advertisers don’t ask us to cover their products, and we don’t comment about their ads. Our policies do not permit placements of advertorial on The Verge,” it reads.

In 2016, the Federal Trade Commission issued new rules to crack down on paid sponsorships that lacked disclosure. In 2017, the organization released a public notice to remind influencers and brands to clearly disclose their relationships.