A former student at Briarcrest Christian School — the Memphis, TN school where Freeze coached football before joining the Rebs — claims that in 1999 she was forced to strip out of her shirt in front of Freeze because he felt the Grateful Dead shirt represented drugs, according to a report from USA Today.

“He didn’t do anything sexual,” then-eighth grade student Katie Dalmasso told USA Today. “But I stood in the corner and faced the wall when I did it and I changed out of my shirt. No privacy.” 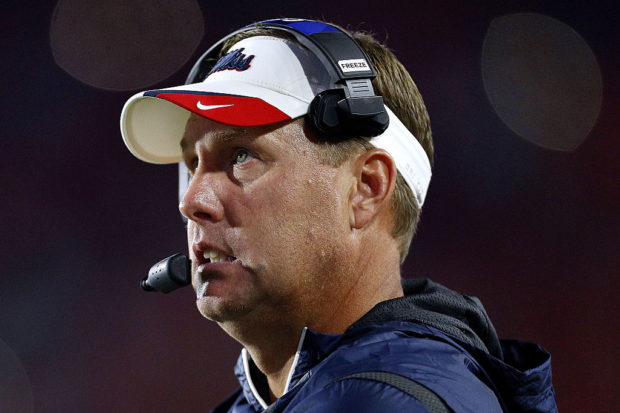 OXFORD, MS – OCTOBER 01: Head coach Hugh Freeze of the Mississippi Rebels reacts during the second half of a game against the Memphis Tigers at Vaught-Hemingway Stadium on October 1, 2016 in Oxford, Mississippi. (Photo by Jonathan Bachman/Getty Images)

Another female student claims that Freeze beat her with a paddle, despite the fact it should have been done by a female faculty member.

The disgraced college football coach has denied the accusations stating, “These accusations are totally false. I can unequivocally say that during my time at Briarcrest Christian School I handled disciplinary issues professionally and in accordance with the school’s policy. I am very confident that the members of the administration who worked hand in hand with me during my tenure will verify that.”

I’ve heard lots of stories from people with ties to Ole Miss and access to information that most people don’t have. I don’t know if any of these accusations are true or not, and we should remember everybody is innocent until proven guilty.

However, let me say this. I was not shocked one bit when news of the call to an escort service was leaked. Apparently there is also more info that could be dropped to the public soon.

It’s going to be extremely hard for Freeze to defend forcing an underage female student to remove her shirt in front of him, if the accusation does in fact turn out to be true.

You can go ahead and hammer the final nail in the coffin of his career if any of this is proven.