The fake news mentality over at Gateway Pundit is fierce.

The latest in the site’s quest for journalistic lies is a story published Wednesday about Rebel Media‘s “conservative firebrand” Laura Loomer getting her tires slashed.

The headline says as much. So does the ample piece.

It’s not true. But it’s nothing an “update” can’t fix, right?

The headline reads: “Fearless Conservative Firebrand Laura Loomer Has Car Tires Slashed (Updated).” They’re not too creative over at Gateway Pundit — the deck is the same as the headline — i.e. WRONG.

And then there is another reminder that something is not quite right: “(UPDATE BELOW)”

How about: Guess what? We’re total shit heads. We got this whole thing wrong. This hapless 24-year-old woman’s tires weren’t slashed at all, which you can plainly see by looking at the photograph.

Thankfully a mechanic takes the air out of the story. Because what reporter would ever think to ask a someone with an expertise in cars to comment on a tire slashing and make sure this isn’t fiction? “I have a ‘friend’ who has slashed tires before and that is not a slashed tire,” said a trusty email source, explaining what a tire stab wound would entail.

Just so we’re clear: Gateway Pundit may call Loomer, a former operative with James O’Keefe‘s Project Veritas,  “fearless,” but The Mirror will not. There’s nothing “fearless” about claiming your tires were slashed so strangers can feel sorry for you when really what you need to do is go to a fucking tire center once in awhile to get the air checked — in this case, in her head — and make sure no nails have made their way into her tires.

Here’s the update: “A mechanic called us to say the tires may not have been slashed. This may have been a blowout.”

Which may be even more problematic. So a mechanic just happened upon the post and called bullshit?

A story based on poor reporting is never going to end well.

Loomer says someone dogged Loomer by insisting that she’d created a GoFundMe page when she says that never happened.

Loomer says an automechanic, AAA and a police officer told her that her tires had been slashed.

She told Gateway Pundit that she’s been receiving a lot of online threats as well as nasty messages via text and phone calls.

On July 25, she ran a tweet that has since been deleted saying she wishes for thousands of migrants to die. 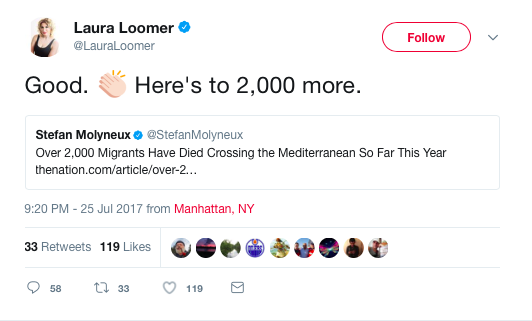 But lets get back to those allegedly “slashed” tires: 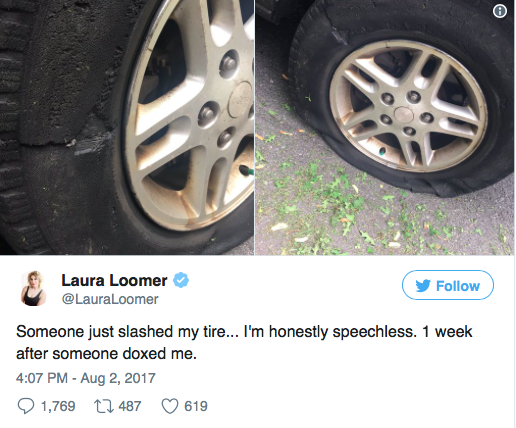 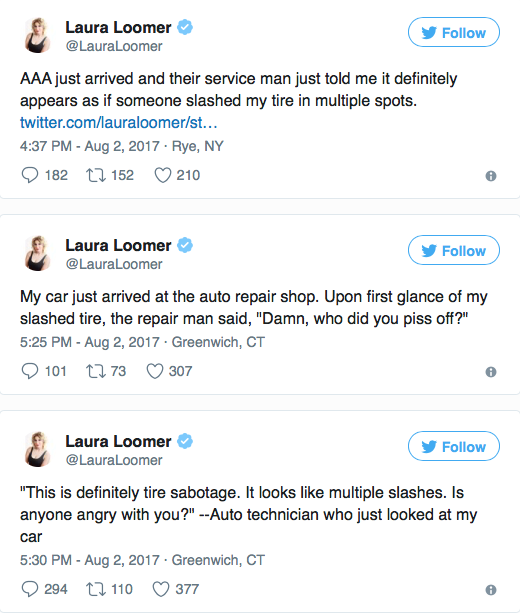 Gateway Pundit appears to be having a love affair with fake news. On July 7, Gateway Pundit ran a completely false story about a CNN reporter they said had a physical encounter with Reddit user HanAssholeSolo’s father.

The excuse the site gave The Mirror was priceless.

“It was sent to us by a source that was apparently mislead, the error was corrected within 15 minutes of it being up,” said White House correspondent Lucian Wintrich, speaking on behalf of his boss Jim Hoft.

He added, “Not sure how this is a story. But you do you.”

UPDATE: Gateway Pundit has removed the story from its site.

UPDATE #3: Loomer won’t defend you unless you stand with her and her bullshit story. 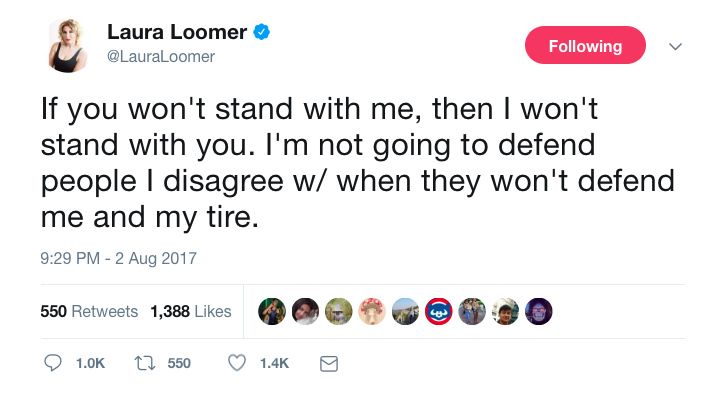