The “Unite the Right” rally drew white nationalists, neo-nazis and members of the militia movement to what was supposed to be an event with speakers. Police promptly called the permitted event an unlawful assembly after brawls between rally-goers and counter protesters. The event devolved into a car violently striking a crowd which lead to the death of at least one individual. (RELATED: At Least One Dead In Charlottesville As Protests Continue) 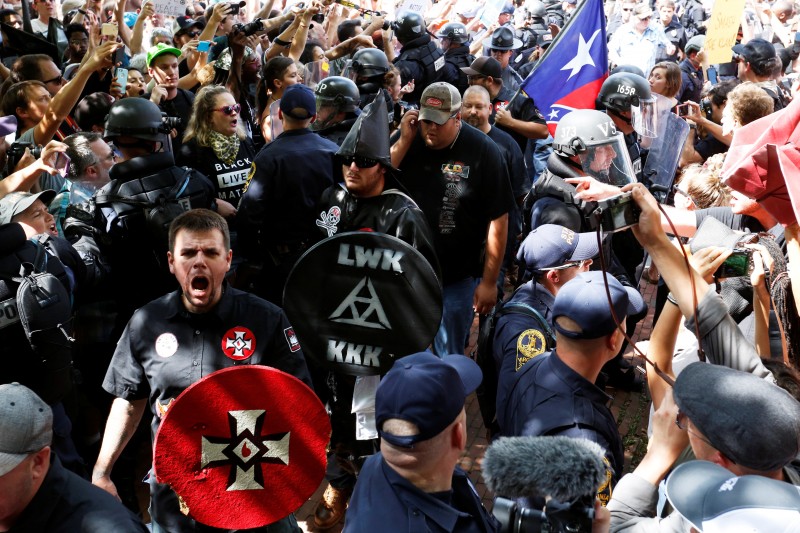 Riot police protect members of the Ku Klux Klan from counter-protesters as they arrive to rally in opposition to city proposals to remove or make changes to Confederate monuments in Charlottesville, Virginia, U.S. July 8, 2017. REUTERS/Jonathan Ernst

“We’re closely following the terrible events unfolding in Charlottesville, Virginia. We condemn in the strongest possible terms this egregious display of hatred, bigotry, and violence on many sides. On many sides,” Trump said at in a statement in Bedminster, New Jersey. The president pushed back against criticism that he is responsible for the violence Saturday, and said these sorts of actions have “been going on for a long time in our country.”

“We have to come together as Americans with love for our nation and true affection for each other,” Trump added. He continued on to say that the U.S. has “record employment” and “companies coming back to our country.”

Trump said due to this economic success watching the events unfold in Charlottesville is “very sad.”