As tempers flare in the wake of the Charlottesville protests and vehicle attack (whose driver is being held on charges of second-degree murder) Saturday, which left 19 injured and one dead, some leftists in the media are calling for increased violence.

Repeating calls in January to “punch a Nazi” after Richard Spencer was assaulted on camera, Kotaku games journalist Nathan Grayson, infamous for sparking the GamerGate debacle in 2014, penned a series of tweets Saturday, calling on his followers to “punch some goddamn nazis.”

“If you ever *hear* about a possible nazi rally, organize, show up, and stop this shit from ever happening again,” he wrote.

“Don’t let them feel comfortable. don’t give them an inch of space. destroy their platforms before they even open their vile fucking mouths,” commanded Grayson. 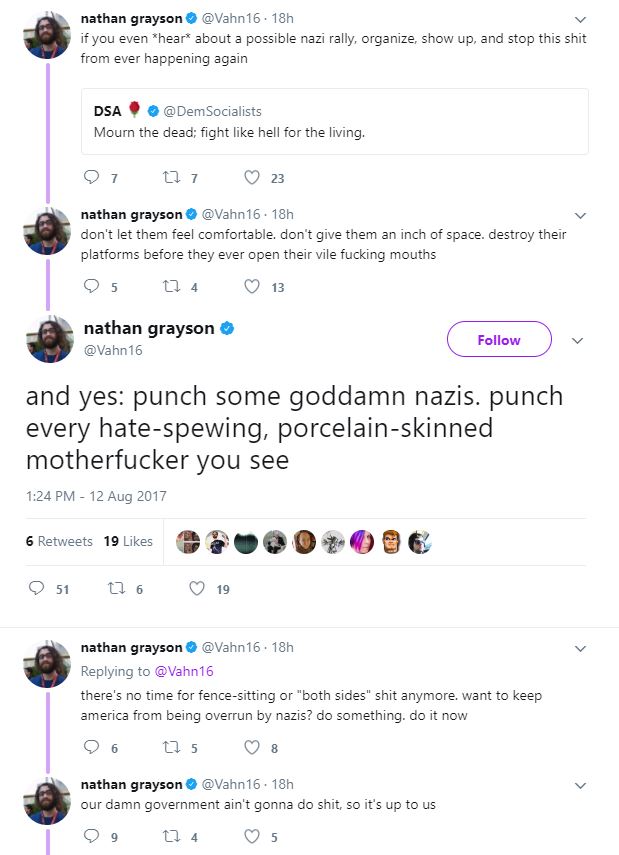 Grayson, whose job consists of sitting behind a desk in Gizmodo’s lavish New York City office, urged his readers to go on the offensive and physically assault people in public.

“And yes: punch some goddamn nazis,” he wrote. “Punch every hate-spewing, porcelain-skinned motherfucker you see.”

Grayson also called out centrists and anyone refusing to participate in political violence with hyperbolic claims that a thousand neo-Nazi marchers standing around with Hawaiian tiki torches could one day define America.

“There’s no time for fence-sitting or ‘both sides’ shit anymore,” he wrote. “Want to keep America from being overrun by nazis? do something. do it now. our damn government ain’t gonna do shit, so it’s up to us.”

His remarks, although well-received by some of his compatriots and retweeted by them, were met with condemnation from moderates who pointed out that his words would only enable extremists to recruit more followers into their ideology.