The Trump campaign released a new ad on Sunday blasting Democrats and excoriating President Trump’s “enemies” in the mainstream media.

“Democrats obstructing, the media attacking our president, career politicians standing in the way of success,” begins the 30-second ad.

Notably absent are photos of any Republicans, who Trump has not shied away from criticizing in recent weeks for failing to repeal Obamacare.

The middle part of the ad — which is notable for its release a day after a white nationalist protest ended in the killing of a woman in Charlottesville, Va. — touted Trump’s achievements in his first 200 days in office.

“One million jobs created; more Americans working than ever before; unemployment lowest level since 2001; the stock market, all-time record highs; the strongest military in decades,” the ad goes.

But, the narrator claims: “The president’s enemies don’t want him to succeed.”

A collage of journalists and news anchors — mostly with CNN and MSNBC — pop up on the screen. CNN anchors Don Lemon, Anderson Cooper and Jake Tapper make an appearance, as do MSNBC hosts Chris Hayes, Rachel Maddow, Joe Scarborough, Mike Brzezinski, and others. 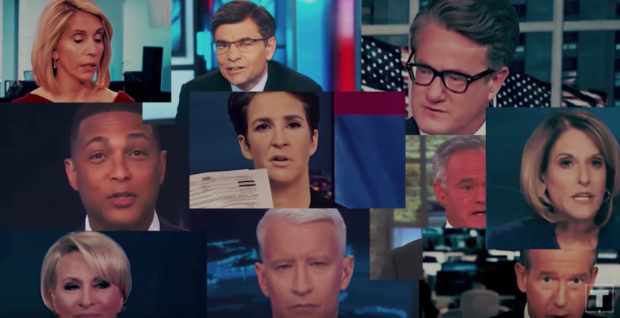 “Americans are saying: Let President Trump do his job,” the narrator says.

“After only 200 days in office, President Trump has already achieved great success. He has fueled the creation of one million new jobs and growth in the economy, including new lows in unemployment claims and all-time record highs in the stock market, and he is rebuilding our military to be the strongest in decades,” Trump campaign executive director Michael Glassner said in a statement releasing the ad.

“Yet, the mainstream media continue to attack the President and career politicians continue to stand in the way of his progress. This new campaign ad speaks directly to the American people and sets the record straight, reminding them that President Donald Trump will not stop fighting for them and will not allow anyone to stand in his way to deliver success for them.”