NEW YORK–New York City residents and law enforcement prepared for President Donald Trump’s arrival to the city Monday, a place he has not visited since his presidential inauguration, where he will spend three nights at Trump Tower.

In anticipation of Trump’s visit to the city from August 13th thru August 16th, NYPD announced an expectation of traffic delays during various times in the area of East 57th Street and Fifth Avenue in Midtown Manhattan, where Trump Tower is located.

President Trump is expected to deliver a press conference from Trump Tower before he leaves the city. The president previously avoided his hometown out of deference to taxpayer cost of the trip. If Trump is in City, Fox News reported, NYPD estimates the cost will be around $308,000 a day.

Anti-Trump protesters decided not to wait until Monday for the president to arrive at his palatial high-rise, marching on Sunday from Times Square to Trump Tower while chanting and carrying various signs.

“No KKK no fascist USA hey hey!” the marchers yelled as they swarmed upon 57th Street and 5th Avenue.

Rich Rellison, an anti-Trump protester from Brooklyn, told The Daily Caller Sunday that the violent events in Charlottesville Saturday brought him “over the edge” 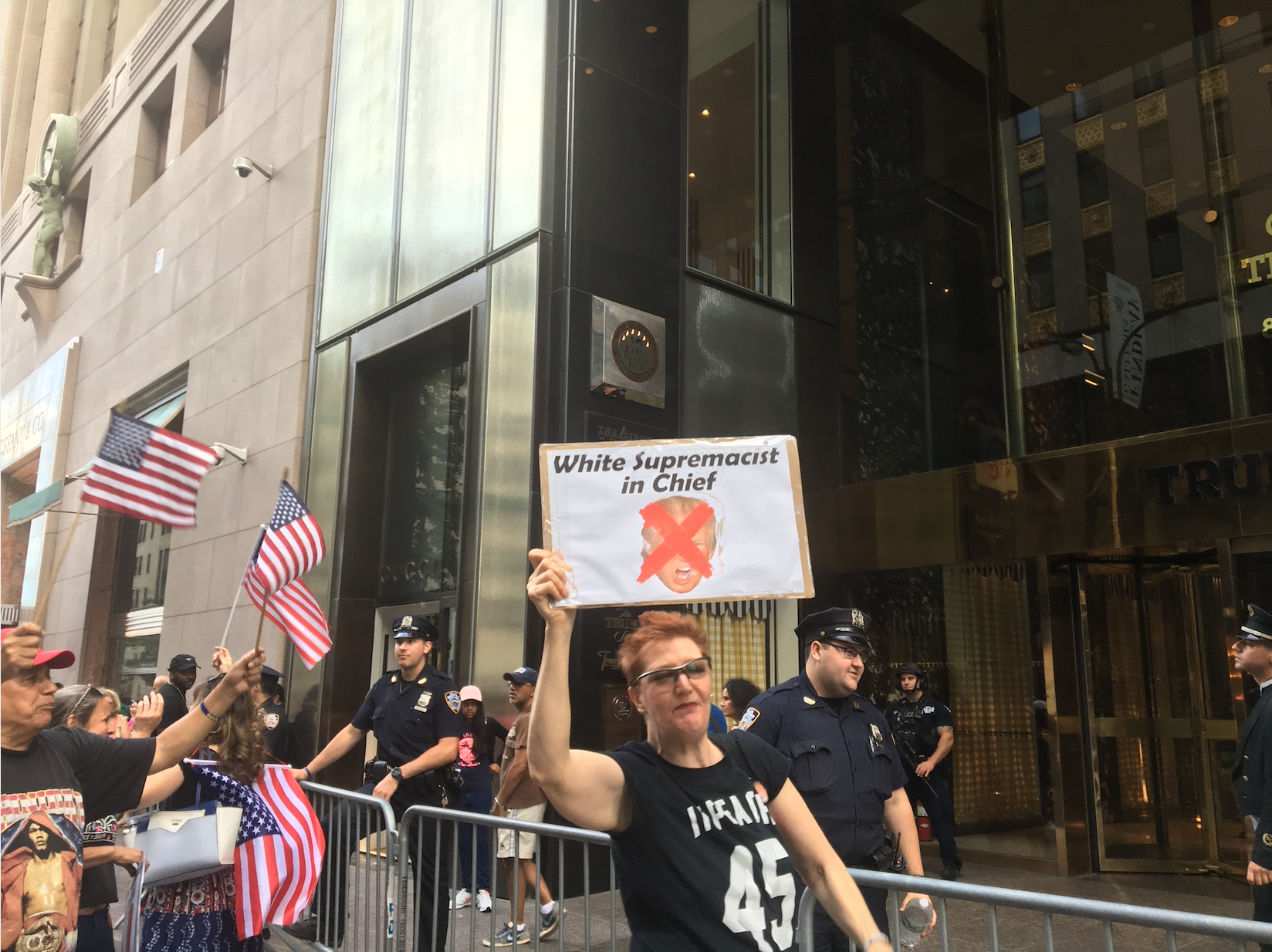 “It’s not about impeachment anymore. It’s about jail. He’s a traitor. He’s a fascist–just an overt fascist. He needs to be stopped by any means necessary,” Rellison said. “We’re passed impeachment now–now it’s to jail. I’d say it’s whatever it’s got to be to get him out of government, because he is going to ruin the country.”

Joyce Mann, an anti-Trump protester from Manhattan, told TheDC, “I have been marching for civil rights, human rights, everybody’s rights for 50 years and I’m sick of it. I’m marching for my grandchildren and for the world that they’re going to inherit. This man is a sick bigot and does not represent the values of the United States”

However, not all demonstrators at Trump Tower were against the president. A handful decided to show up to display their support for President Trump.

Mario Lavoy, a Puerto Rican resident of the Bronx, told TheDC he remains proud of Trump and supports him for his stance on illegal immigration.

“President Trump is going to make America great again. It’s about time that we have to stop illegal immigrants in our country. Remember one fact that the media doesn’t want to be an issue. Donald Trump is not against immigrants. He’s against illegal immigrants,” he said. Lavoy added,  “That’s a big factor that the media doesn’t mention. It’s about time we demand quality of life for the American people. The safety of this country is priority one.”