It took some persuading, but eventually a man who identified himself as Thomas let us behind the lines of a white nationalist group girding itself to conduct melee combat against antifa protestors Saturday in Charlottesville, Va.

Thomas, a semi-spokesman for the group, wasted no time giving us the official line. “We’re here to protect white identity, white culture, white heritage, and we’re here to promote the new American nation that is currently under construction,” he told TheDCNF. “We’re not just white nationalists, because we believe in more than just a white nation,” he added. “We want a nation of values, of heritage, of culture. We don’t want just borders with white people inside. We strive for more than that.”

“We’re more than that, we’re fascists,” he said. “We believe in a strong centralized government. We believe in unity and strength among its people.”

He and some 700 members of fringe groups on the right were gathering in the park for what they dubbed a “Unite the Right” rally — partly to speak to an ongoing debate over the presence of Civil War monuments on public property. A large statue of Confederate Gen. Robert E. Lee is the focal point of the park, which was called Lee Park until the city council voted to rename it Emancipation Park in June.

The white nationalist groups, including Vanguard America and The League of the South, had arrived to the park early (they had a permit) and tightly controlled the entrances.

Outside the park, a large contingent of counter-protesters was mobilizing on E. Market Street. These included local residents and University of Virginia students upset by the presence of white supremacists rallying in their backyard, but members of radical leftist groups including Antifa and the Workers World Party dominated the group.

“We came out here to protest for our identity as white Americans,” Cody, a young man initially hesitant to speak, told TheDCNF. “We feel like everybody has a right to defend their own group and own ethnic interests and white people are the only ones where this is socially and culturally taboo.”

Cody’s perspective that white culture was under attack seemed to be shared by those around him.

“If we were black people and we said we want to support black identity and we don’t want black people to go extinct, and we wanna have black communities and black culture, nobody would have a problem,” Cody said.

Police had cordoned off the other three sides of the park. 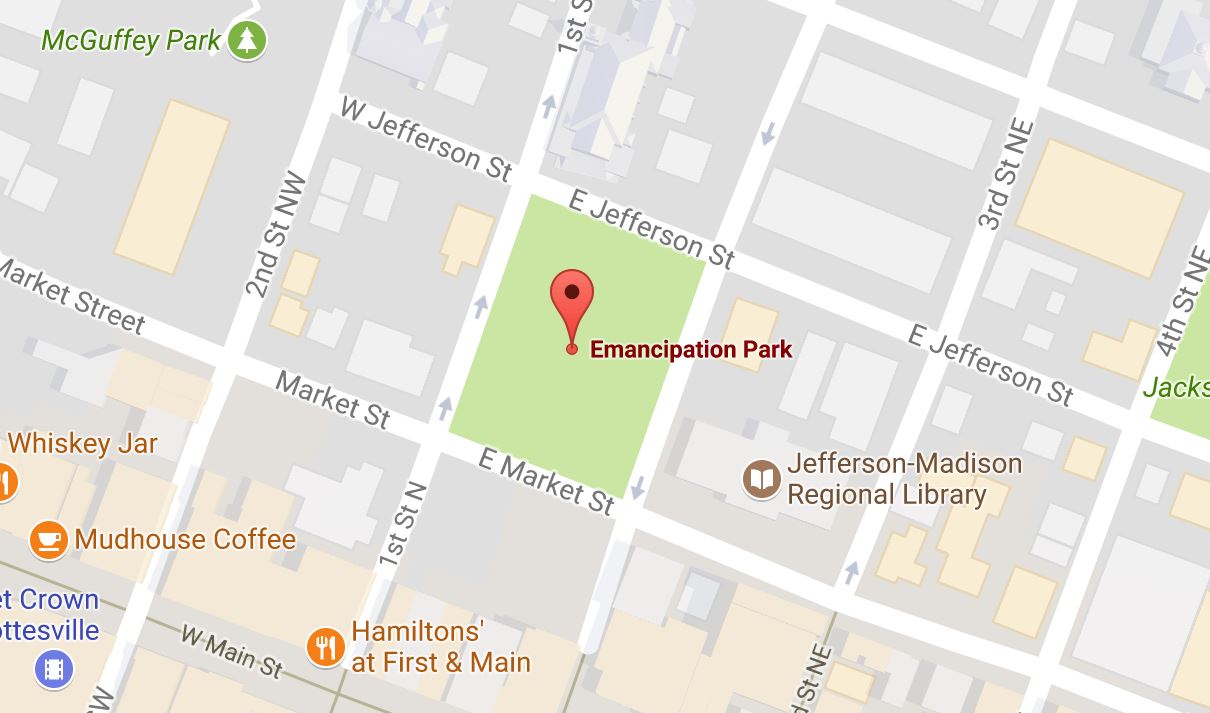 Three lines of human buffers initially separated the rally-goers from the counter-protesters outside the park. A line of uniformed Virginia State Police officers cordoned off the rally inside. A row of faith leaders and activists stood in front of the police on the side of the counter-protesters, singing hymns including “This Little Light Of Mine.” About thirty “militiamen” armed with heavy weapons and donning military apparel positioned themselves as the third barrier between the rally and the counter-protesters.

“We don’t support the hard left or the hard right,” Christian Yingling, the commanding officer of the Pennsylvania lightfoot militia, told TheDCNF. “We come out here strictly to ensure people can say their piece, peacefully.”

The militiamen would remain at their position, even as State Police later withdrew.

As the morning progressed, columns of 20 to 30 white nationalist at a time made their way through the growing crowd of counter-protesters in order to reach the inside of the park. A line of (mostly) young men lined up along the southern edge of the park to control access, shields ready. 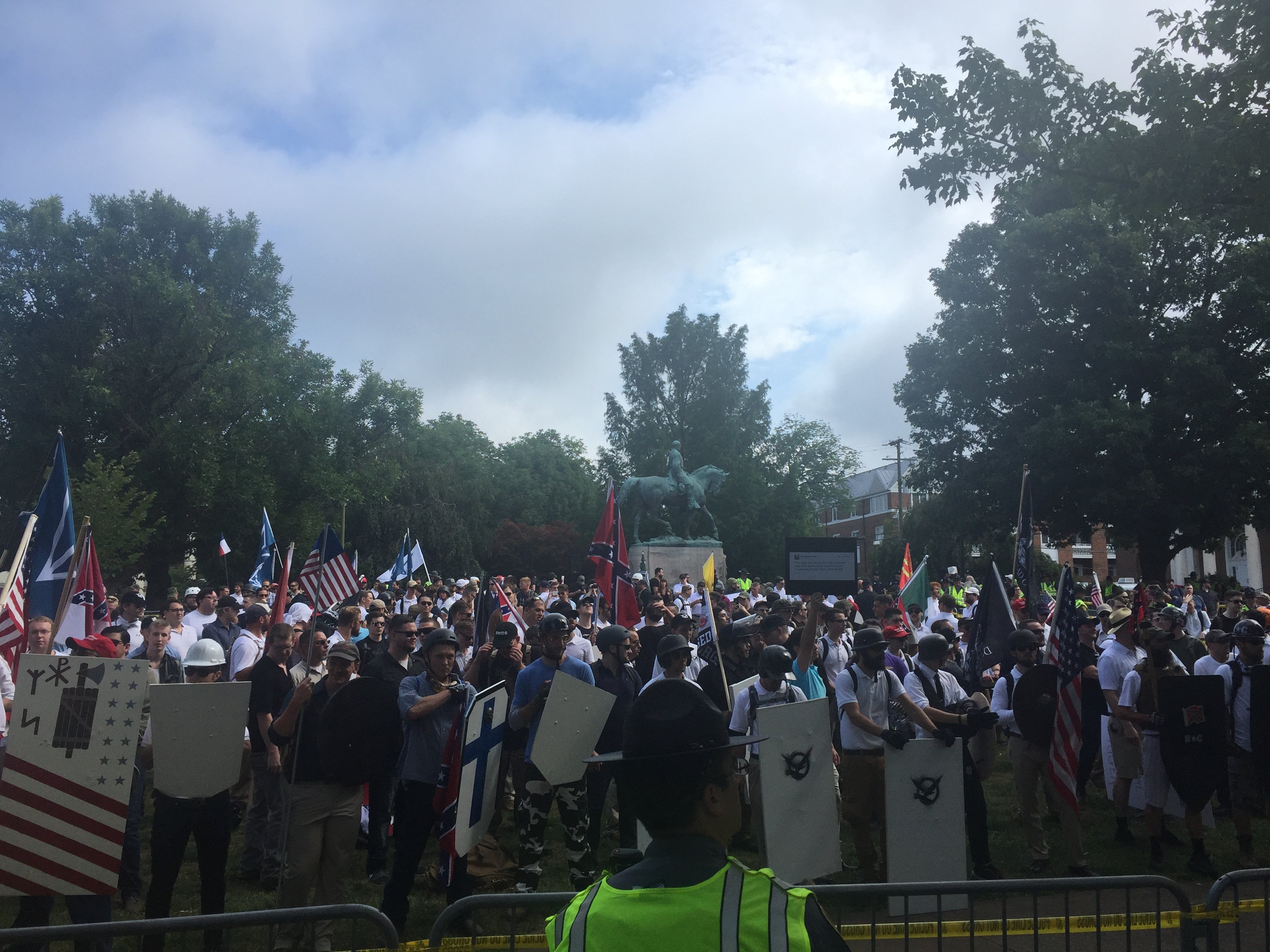 While most of the shields included symbols closely associated with fringe groups and white supremacist causes, two shields featured the logo for the Detroit Red Wings of the National Hockey League with a prominent white nationalist symbol in the middle. The team released a statement disassociating from the events in Charlottesville when notified.

Down on the street, the counter-protest steadily grew in size, and both sides began hurling accusations.

Police initially held their position around the three sides of the park but later left the clashing factions to their own devices. Emotions boiled over into intense hand-to-hand combat before noon. Individuals from both sides began throwing themselves at one another without hesitation. Virginia Democratic Gov. Terry McAuliffe declared a state of emergency before the event had officially begun.

Inside the park, men and women from the front line stumbled to the back of the park for medical treatment. A sort of ad hoc medical zone was created, where people were treated for injuries ranging from head wounds to chemical burns. 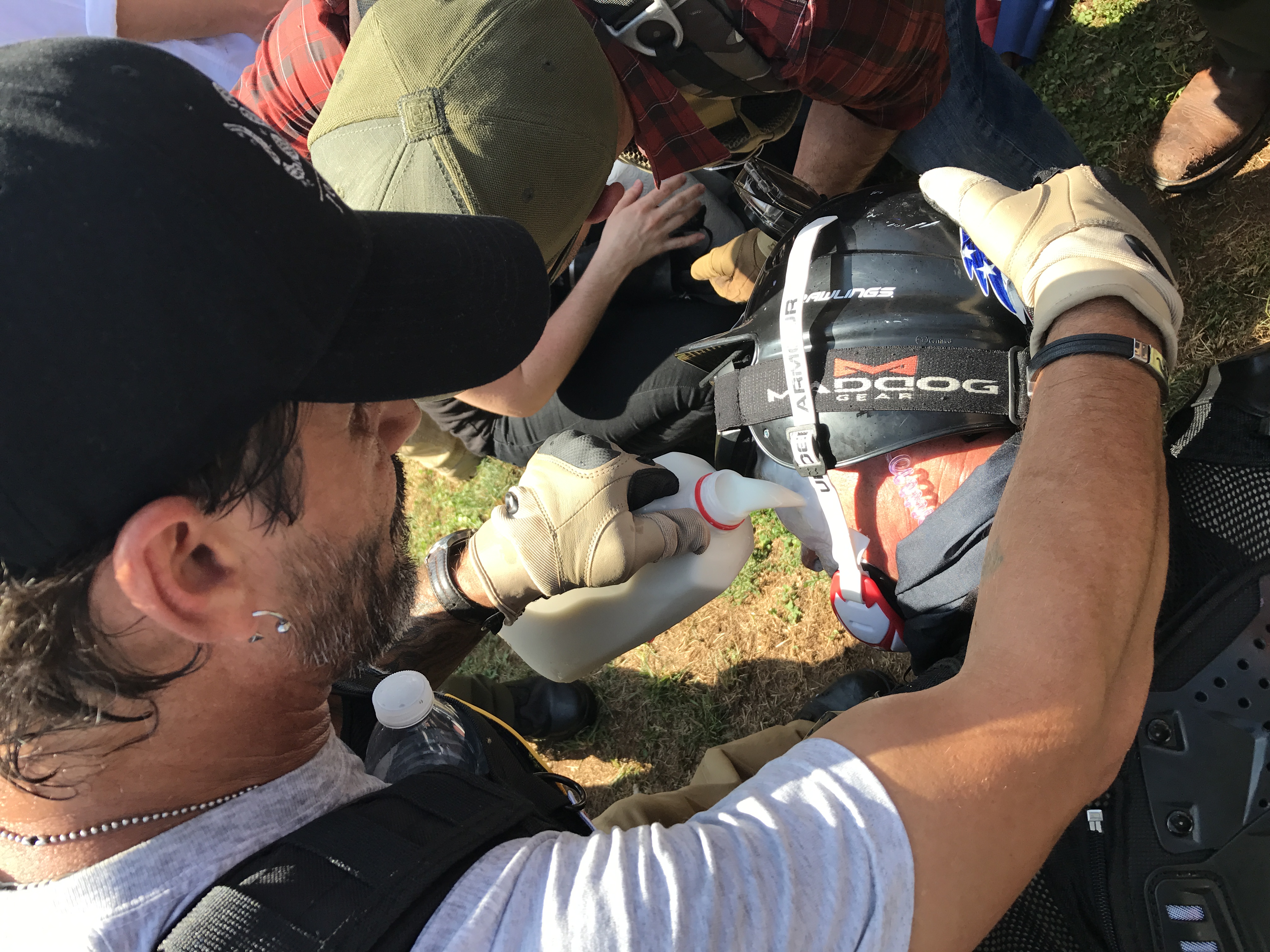 White supremacists poor milk onto the face of a member who was hit with tear gas. (Ted Goodman/TheDCNF)

After McAuliffe declared a state of emergency, police announced that the gathering in the park was unlawful and ordered everyone to vacate the premises. Officers in full riot gear mobilized onto the park, forcing the white nationalists down onto E. Market where thousands of counter-protesters were waiting. Some in the group resisted the police.

As a group moved away from the park and into a parking garage next to the police station, one antifa activist broke away from his friends.

White supremacists pounced, armed with sticks and large wooden planks. In seconds, the protester was on the ground, blood pouring from his head. He attempted to get up, legs wobbly. Police stood by, watching it all happen. Of all the images we captured that day, this is surely the most haunting.

After the group of white supremacists fell out of sight, the counter-protesters in the downtown area celebrated. Loud hoots and hollers of victory peeled through the crowds of counter protesters as supremacists were driven from the park, and seemingly from the city.

Members of the press gathered quietly around tables, and police officers started to regroup, assuming the action was largely over. Then, a 2010 Dodge Challenger tore through a crowd of counter-protesters.

Bodies flew. Screaming and confusion gripped the crowd as the car plowed through the people, slammed into the back of a sedan and reversed out at a dizzying speed.

Heather Heyer was killed and 19 others were injured. The driver was later identified as James Alex Fields Jr., an Ohio man reportedly sympathetic to Adolph Hitler and Nazism.

TheDCNF was on scene moments after the attack.

The chaotic scene was exacerbated by narrow streets filled with people and emergency vehicles. Bodies were strewn across the street as first responders and emergency personnel worked feverishly to stabilize the injured.

We caught the immediate response of Dr. Cornel West, a prominent and provocative left wing activist.

“Each life is precious, no matter whose it is,” West told TheDCNF. “It’s out of control man. We’ve got to get some love and justice.”

After receiving a tip that some of the white nationalists were holed up in a parking structure, TheDCNF was able to catch up with Isaac Baker of the League of the South, a neo-confederate organization pushing for a second secession from the Union.

“We came to exercise our rights in a peaceful manner,” Baker told TheDCNF. “The Godless destructors of civilization known as antifa came here to meet us, prevent us from exercising our rights, and we refuse to back down.”

Baker denied any knowledge of the vehicle incident, and another member claimed that it was a “Black Lives Matter chick” who had run people over.

While tracking the movements of the white nationalists, we learned the group had attempted to relocate to another park in the city. While driving, we noticed a string of emergency vehicles making their way towards the outskirts of town. We chose to follow the sirens and found ourselves in a sleepy neighborhood seemingly a world away from the chaos downtown.

“I saw the helicopter go down,” Robby Noll, a local resident, told TheDCNF. “It was mechanical problems I suspect. The helicopter appeared to maybe invert, and then it appeared to go sort of vertical and some pieces came off of the craft I guess, and then it seemed to go to the earth pretty quick.”

Noll said police were on the scene within three minutes.

TheDCNF was the first media outlet on scene. For the next hour, emergency personnel flooded the scene and neighbors milled about. At about 6:00 p.m., Virginia State Police spokesperson Corinne Geller informed a gaggle of reporters that two state troopers had died as a result of the crash.

McAuliffe, Charlottesville Mayor Michael Signer and community leaders staged a press conference a short time later, where they urged calm and denounced the actions of the white supremacists.

After the sun set, three were dead and dozens injured. News outlets projected the images around the world as the nation began to digest. While cable news pundits and columnists opine over who is to blame for the events of Saturday, one thing must be made unequivocally clear — Charlottesville was ground zero for hate and intolerance Saturday.