On this week’s program, host Brian Stelter practices the art form of the pregnant pause.

People are questioning President Trump’s fitness — mostly off the air, he says.

The chyron blares: “Questions reporters are too nervous to ask.”

But guess who isn’t too nervous to ask them? No matter that Stelter is not a psychiatrist and hasn’t attended medical school, he sure as hell is going to play a physician on Sunday’s edition of “Reliable Sources.”

Stelter is describing the questions he claims no reporter will ask: “Questions that often feel — [WEIRD-ASS PAUSE] — out of bounds. Off limits. Too hot for TV.”

Is the President of the United States a racist?

Is he suffering from some kind of illness?

Is he fit for office?

And if he’s unfit, then what?

Instead of covering the media – which Stelter says is the program’s purpose – he’s taking his usual blatantly sharp anti-Trump political stance. But he’s going to spend much of the show explaining that reporters have to ask questions about Trump’s mental fitness no matter what they personally think.

Stelter says these questions are “tough to ask out loud” on television.

But balding pasty-hued Stelter will ask them once more for dramatic effect.

Is the President of the United States suffering from some sort of illness?

Is he fit to be commander in chief?

And one more: Is it time for journalists to address these questions head on?

It’s a rhetorical question. So don’t bother disagreeing with him.

Alice Stewart, who worked for Sen. Ted Cruz’s (R-Texsa) presidential campaign, wins the rational award of the day. She says Stelter’s profound questions about the Prez are political in nature. So it’s fine to ask them as long as viewers are aware that the questions serve a political purpose and not a medical one.

“As a previous journalist, if people are raising this question, it is a legitimate story to cover,” she says. “However, often times what we are seeing is a lot of Democrats raising this question. …I think it’s really really important to consider the fact that while we disagree on the issues…I see this much more as a political issue than a medical issue.”

Bernstein, who’s being patched in from the Hamptons, looks like he’s preparing for his meet-cute with his hair blowing in the wind and his eyes crinkled in the sunshine. His tortoise-shell framed glasses add a nice touch of fuddy-duddy.

He’s adamant that the media needs to objectively report out Trump’s mental issues by hunting down Republican lawmakers who think Trump is mentally unfit for office. No matter that no one has ever proven anything, Bernstein says the media needs to keep at it. Bernstein insists he’s being absolutely objective and starts talking about himself in the third person.

Which isn’t crazy at all.

Bernstein stresses that this is “not about our opinions.” It should be about “carefully” reporting the story.

He becomes absolutely giddy when Brinkley starts talking about Watergate, which is, of course, the big story he helped break with Bob Woodward.

Brinkley can’t wait to ding Trump. “We all know he is a neon billboard for overt narcissism, malignant self-love,” he says. “We’ve all known that. Now we’re getting the ramifications of what having a sick man in the white house means.”

This is cotton candy crack for Stelter. “A SICK MAN IN THE WHITE HOUSE,” he says echoing Brinkley.

Brinkley enthusiastically agrees with himself. “He is. He’s not mentally stable,” he says.

It’s the 18-minute mark and I’m already itching for the program to be over so I can get on with the rest of my glorious Sunday.

A new guest is welcomed to the show. It’s Jonathan Lemire, a White House correspondent for the Associated Press, and a wavy-haired Ginger who reminds me of a cleaned up version of TV’s once scandal-ridden former child actor Danny Bonaduce.

Lemire has unique observations about what was going on behind-the-scenes during Trump’s infamous “both sides” presser earlier in the week. He says White House Press Secretary Sarah Huckabee Sanders and other aides were frantically looking around trying to figure out what to do as Trump squandered a chance to denounce neo-Nazis.

Bernstein insists he’s all about foregoing his personal opinions. But he’s now wondering if it’s time for Trump to be pushed out of the White House by members of his own party.

Alice Stewart makes another interesting point: Many in his base see that he did denounce the KKK, she says. That is what Republicans and more conservative media outlets are stressing.

Stelter feels her. “The takeaway is that the press, the media, is never satisfied,” he crows.

Now it’s time to address the elephant in Washington: Steve Bannon, the President’s chief strategist, who was forced off the White House Island this week and is now back at the helm of Breitbart News — or as some put it, Breitbarf News.

Joining the show is Joshua Green, another Ginger, a CNN political analyst and author of Devil’s Bargain.

“He thinks he can use Breitbart News as a weapon,” says Green.

Stelter asks, “Is Breitbart big enough for him?”

Green, the second pale-faced Ginger on today’s program, says Bannon has always said TV is not where it’s at.

Stelter is apoplectic. “Wait wait wait, hey hey we’re on CNN here,” he says, stating the obvious and pretending to be offended.

“Reliable Sources” rightfully gives VICE its due for getting the viral video of white supremacists at the Charlottesville rally.

But instead of having a VICE reporter on, Stelter introduces Nikole Hannah-Jones, a reporter for NYT Magazine who has a clownish red hairdo that looks like Little Orphan Annie meets Vegas showgirl.

The show’s Ginger count is officially at three. But Hannah-Jones takes it to an extreme.

She’s talking about the importance of diversity in newsrooms. But with that hair, I really can’t concentrate on anything she’s saying. 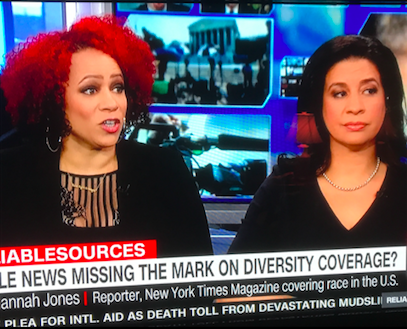 Tanzina Vega, a national race reporter for CNNMoney, is talking about being a minority covering race and whether she can cover a story on race without bias.

No program with Stelter at the helm is complete without him shitting on Fox News.

He’s talking about James Murdoch, a chief exec at 21st Century Fox, condemning Trump’s reaction to Charlottesville and contributing a hefty $1 million to the Anti-Defamation League in the wake of the Virginia tragedy.

Stelter says some people think Fox News has an adverse affect on society.

The chyron: “Will James Murdoch’s Trump rebuke trickle down to Fox News?”

This last dig at Fox News is icing on Stelter’s TV cake.

And that’s a wrap for this week’s edition of “We Watch CNN’s Reliable Sources So You Don’t Have To.”

Feel free to write me with your observations about the show at Betsy@DailyCaller.com.