Reid, who has a history of spreading misinformation, garnered thousands of retweets on Sunday by amplifying an unproven rumor that President Trump’s re-election campaign is hiring minority actors for Trump’s political rally in Phoenix on Tuesday. 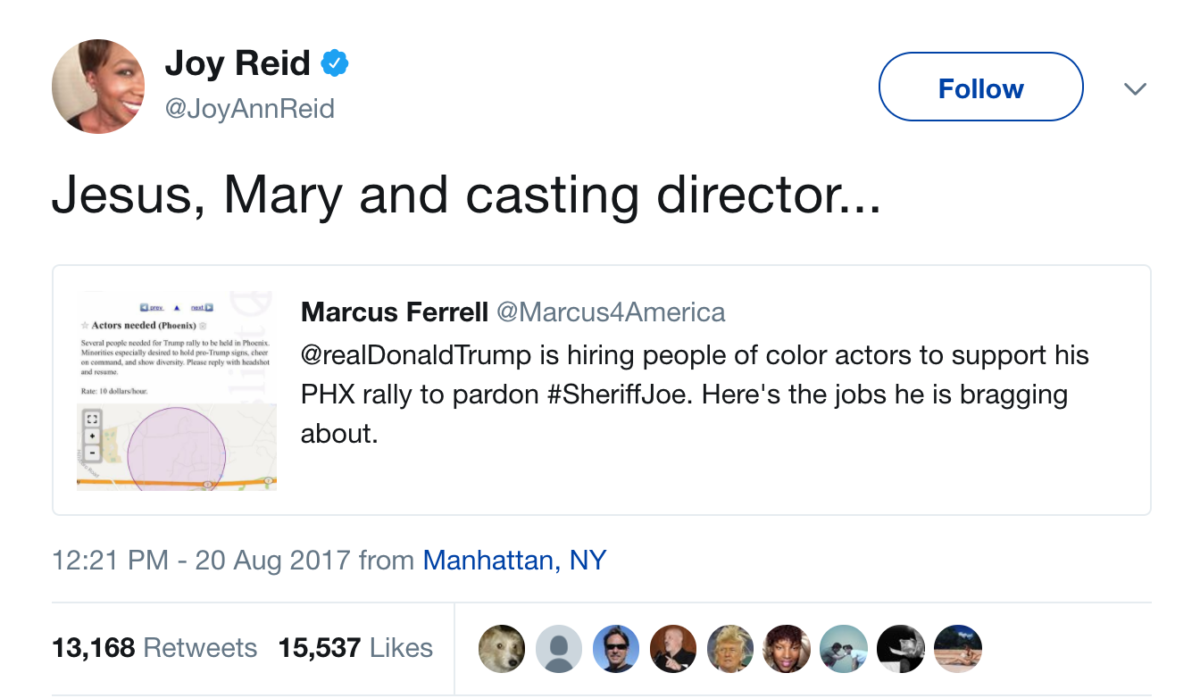 Reid followed up with an “update” noting that the link had been deleted.

A left-wing activist was the first to claim that the Trump campaign is hiring minority actors for the campaign rally. The only basis for his claim was a since-deleted Craigslist advertisement soliciting actors.

@realDonaldTrump is hiring people of color actors to support his PHX rally to pardon #SheriffJoe. Here’s the jobs he is bragging about. pic.twitter.com/SBeYoXfBFh

There is no proof that the Trump campaign put out the ad. Similar ads ostensibly soliciting paid supporters (or protesters) at political rallies have turned out to be hoaxes. The Trump campaign did not immediately return a request for comment.

Last month, Reid tried to justify Democrat Jon Ossoff’s loss in the special election for Georgia’s 6th District by falsely claiming that the close loss came in a district that Trump won by 20 points. In fact, Trump only won the district by one point.

The day before her false claim, Reid asserted several falsehoods at once while attacking Trump’s “Soviet” wives. (RELATED: Count The Errors In This MSNBC Host’s Attack On Trump’s ‘Soviet’ Wives)

Four days before Reid’s error-riddled attack on Trump’s wives, she stated another falsehood live on national television. Reid dismissed allegations that former Secretary of State Hillary Clinton approved the sale of a uranium production company to Russia in exchange for donations to the Clinton Foundation. Reid called it “an entirely made up conspiracy theory.” A fact-check by The Daily Caller News Foundation found Reid’s claim to be false.