There’s no way to pin the latest terror attack on neo-Nazis or white nationalists or the alt-right, so I’m not sure why we’re even talking about it. Some murder victims are more important than others.

The fugitive believed to have driven the van in last week’s terrorist attacks in Spain was shot dead by the police on Monday in a village outside Barcelona after a Europeanwide dragnet, the police announced.

The fugitive, Younes Abouyaaqoub, 22, used a van to mow down a crowd on Las Ramblas, Barcelona’s central boulevard, last Thursday, killing 13 people, according to the police. He then stole a car, killed its driver and made his getaway with the driver’s body still inside.

…At 4:10 p.m. Monday, attention quickly turned to Subirats, a collection of villages about 20 miles west of Barcelona. The town was placed on lockdown as the authorities announced that a man wearing an explosive belt had been “shot down.”

As noted above, there’s no way to blame the preferred villains for what this man did. He wasn’t wearing a MAGA hat. They’re not going to find Breitbart links on his social media accounts. Heck, he wasn’t even white. Wasn’t he the real victim here?

And yes, the #MuslimsFearBacklash stories have already begun. 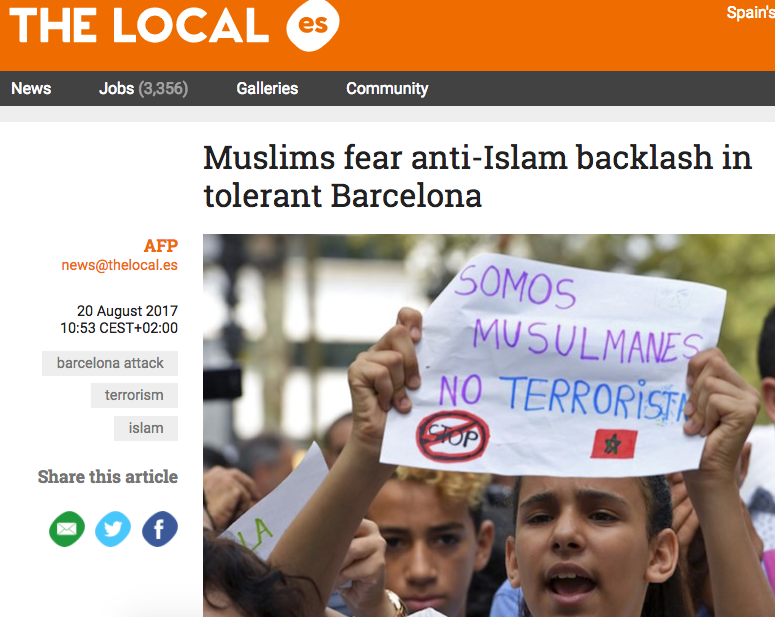 I’ll stop talking about this, then, before somebody calls me a racist. There’s nothing worse than being called a racist.