I apologize for this blog post. I don’t really care about this story either. But the New York Times does, so blah blah blah.

Louise Linton, the labels-loving wife of Steven Mnuchin, replied condescendingly to an Instagram poster about her lifestyle and belittled the woman, Jenni Miller, a mother of three from Portland, Ore., for having less money than she does…

“Aw!!! Did you think this was a personal trip?! Adorable!” she wrote…

“You’re adorably out of touch,” she said, later adding, “your life looks cute” before concluding, “Go chill out and watch the new game of thrones. It’s fab!” 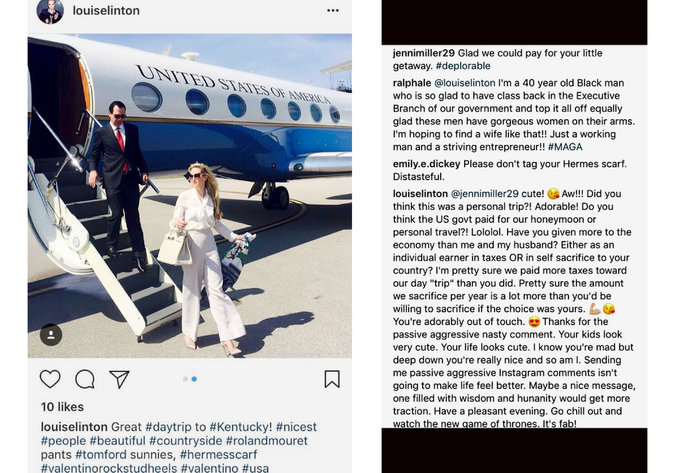 Whatever else you think about this, “Watch the new Game of Thrones” is rarely bad advice. (A lot of people say it’s just fan-fiction this season. Like that’s a bad thing?)

Haberman took to Twitter to explain why this story is important:

2/ arguably unwise, did not rise to level of a story on its own. It was her comments to the Oregan woman who posted on her page.

Well, if you want to show solidarity with that woman, you could start by learning how to spell the name of her home state. It’s Oregano.

So, a rich lady was a jerk on Instagram, and it’s news because she’s tangentially connected to the Trump administration. Okey-doke.

Linton has now apologized, because it’s 2017 and this is what we do now:

Aren’t you glad there’s a whole corps of people assigned to keep track of this stuff for you? How would you get through your day without this very important information?

I didn’t know who Louise Linton was yesterday, and tomorrow I’ll have already forgotten her. But thank goodness she gave the outrage industry enough fuel to get through another day.