Former Democratic presidential candidate Hillary Clinton wishes she had called President Donald Trump “a creep,” saying her “skin crawled” as he stood behind her during a debate. The revelation is just one moment in her latest memoir, “What Happened,” a book that tells “my story” about the 2016 presidential race.

In an MSNBC exclusive on “Morning Joe” Wednesday, Clinton’s voice can be heard reading passages from her anticipated book, including one that details her experience during the Oct. 9 presidential debate in St. Louis, where Trump stood behind Clinton while she answered a question. Clinton claims she wonders whether her reaction of essentially ignoring Trump was the right decision, because if she had turned and said “back up, you creep,” it “would have been better TV.”

She writes: “This is not OK, I thought. It was the second presidential debate and Donald Trump was looming behind me. Two days before, the world heard him brag about groping women. Now we were on a small stage and no matter where I walked, he followed me closely, staring at me, making faces. It was incredibly uncomfortable.” 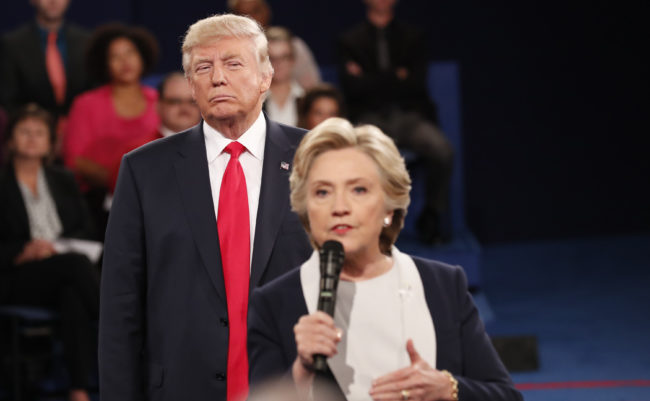 Trump listens as Clinton answers a question from the audience during their presidential town hall debate in St. Louis, October 9, 2016. REUTERS/Rick Wilking

Clinton describes Trump as “literally breathing down my neck” and says “my skin crawled.” 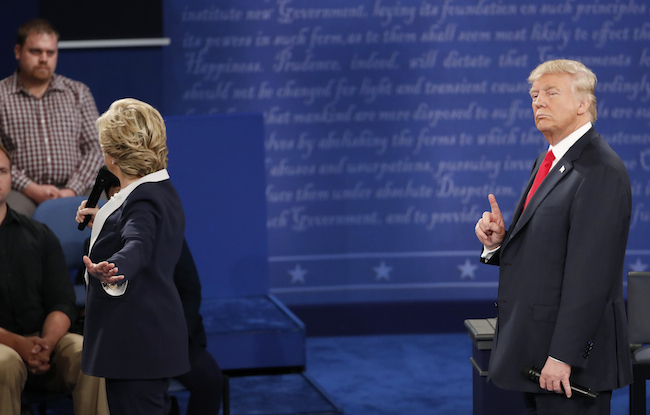 She says she was faced with two options, to “stay calm, keep smiling” or to “look him in the eye and say loudly and clearly, ‘back up, you creep. Get away from me. I know you love to intimidate women but you can’t intimidate me, so back up.'”

Clinton also admits that she “let down” the “millions of people” that were “counting” on her.

“I couldn’t get the job done, and I’ll have to live with that for the rest of my life.”

There’s even a reference to the omnipresent Russians who Clinton suggests might “hack” her subconscious to find “moments from the campaign that I wish I could go back and do over.”