The legacy that Bill Ruger left behind at Sturm, Ruger, & Co., Inc., has had an incredible amount to do with his Ruger Standard pistol, which was originally introduced in 1949 and has seen several updates that endure to this day. Designed by Ruger himself, chambered in .22 Long Rifle and based off the WWII-era Japanese Nambu pistol, the Standard has gone through several iterations, first as the Mark I, II, and III, and most recently as the Mark IV. Nothing qualifies as a classic firearm like a design that’s endured over a span of almost 70 years and continues to be one of the most popular firearms ever made. But what happens when you take a legendary brand like Ruger, with the latest version of perhaps its most quintessential firearm, and pair it with one of the most recognizable gun restoration and finishing companies around? You get the Turnbull Ruger Mark IV, a pistol that joins two iconic looks for a finished product that is sure to turn heads at the art gallery or the shooting range.

Although Doug Turnbull’s New York-based Restoration & Manufacturing Co. does a full scale of restoration and finishing of firearms, it is best known and most easily recognizable for its color casehardening. Not surprisingly, that’s what sets the Turnbull Mark IV off from a standard Ruger-issued firearm, and boy does it make a difference. While Ruger offers several models of the newly released Mark IV, the Turnbull edition plays off the Target pistol and is, of course, chambered in .22 LR.

One of the biggest questions I’ve gotten so far about the pistol on the Gun Digest Facebook page is how much more expensive it must be than a standard Ruger Mark IV. After all, for a pistol that sexy, most people assume there would be a hefty price tag to match. Interestingly enough, the Turnbull version comes in at $595, just $30 more than the MSRP listed on Ruger’s website for the Target model. Along with the color casehardening, the Turnbull Mark IV also features a Turnbull engraving on the right-hand side of the barrel, while maintaining all the standard Ruger engravings. Outside of the casehardening and the engravings, all other features are identical to the Mark IV Target model.

The Mark IV comes with two 10-round magazines and features a bull barrel that measures 5.5 inches in length. The barrel has a 1:16-inch twist and an overall length of 9.75 inches. Total weight of the pistol is right around 36 ounces (unloaded), while height measures 5.5 inches and width is 1.2 inches. The Mark IV features an adjustable rear sight, checkered synthetic grip and fixed front sight.

In terms of controls, the Mark IV is designed with an ambidextrous, manual thumb safety, contoured side ejection port and rear bolt operation. Ruger also gives you the option of converting the safety to left side only. The bolt features grooved bolt ears that are easy to grasp, gloves or not, and a left-side magazine release. The pistol will not fire without the magazine, and the mag drops free when released. The frame is a one-piece, CNC-machined, aluminum design, with alloy steel barrel and receiver. Conveniently, the receiver is drilled and tapped for a Weaver-style rail, perfect for optics mounting. The huge change from the Mark III to the Mark IV is the ease of disassembly for cleaning and maintenance. With the Mark III, introduced in the early 2000s, disassembly seemingly required an entire gunsmithing toolkit, which made field stripping a nightmare. Ruger listened to its customers, however, and the Mark IV now features an incredibly easy push button takedown procedure. The takedown button is located at the rear of the grip frame, just below the bolt. To disassemble, simply lock the bolt back, flip the safety up, and push the takedown button. The rear of the receiver will release, and as you push the barrel/receiver forward it disconnects at the front of the grip frame. The bolt slides out. It’s really that simple; no tools required.

While it seems like a relatively minor upgrade for some folks, those of us who burn through countless rounds at the target range know how important the takedown and cleaning process is. I’ve hated certain vehicles I’ve owned simply because the oil was a nightmare to change — similar issue with cleaning the older Mark pistols. Now that Ruger’s simplified the takedown and maintenance process, there are going to be a lot of happy campers in the .22 pistol world.

At the range, the Mark IV did not disappoint. Sure, it’s a head-turner, but it’s also a tack-driving workhorse. I fired 100 rounds as quickly as I could reload two 10-round magazines, utilizing CCI’s 36-grain, copper-plated .22 LR Hollow Points, and had exactly zero feeding or function issues. As it’s always been — and hence the longstanding popularity of the design — the Mark IV is exceptionally well built, functions flawlessly, and delivers pin-point accuracy. For testing, I shot from 20-yards at the Caldwell B.R. Pivot bench from sandbags, with average five-shot groups coming in between 1.5-2 inches. I also shot two 20-round groups in as rapid succession as I could muster while maintaining accuracy, and all but a pair of holes hit within a 5-inch circle. The trigger is decent, with an audible reset. Overall, the Mark IV is extremely fun to shoot, produces little recoil (making it great for teaching new shooters proper pistol mechanics), and is highly accurate.

It’s hard to imagine a more winning combination of companies than Turnbull and Ruger. At one level, you could say Turnbull’s take on the Mark IV is merely cosmetic, and in a sense that’s true. But it’s such a riveting, eye-catching makeover that it drastically turns a mass-produced pistol into a standout work of art. From the gun store to the range, and Instagram to Facebook, the Turnbull Ruger Mark IV has had folks drooling over keyboards and glass counters, and rightly so. Not only does the Mark IV function well and produce stellar accuracy, it’s now got a simple takedown procedure thanks to a friendly little button at the rear of the gun. It’s optics ready, and it features Turnbull’s iconic color casehardened look. The pistol gives shooters the rare opportunity to own a relatively inexpensive handgun with a custom look and feel. Definitely worth the price of admission.

Gun Digest Book of .22 Rimfire, Second Edition  uncovers technical secrets to the caliber, such as how headspace, rim thickness and other factors affect performance.  Get your copy now 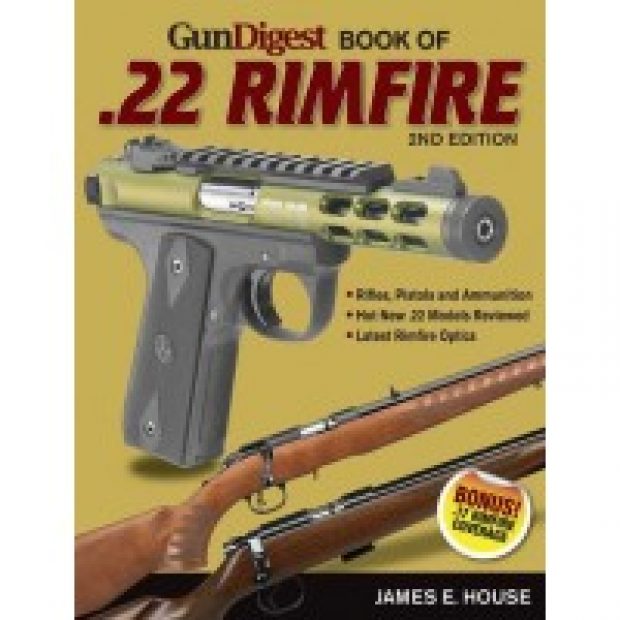