Designs for new missiles can be seen on the walls in photos taken during North Korean dictator Kim Jong Un’s visit to a plant developing solid-fueled missiles for the regime. One of the designs is for a new Pukguksong model, and the other is for a new type of Hwasong weapons system. 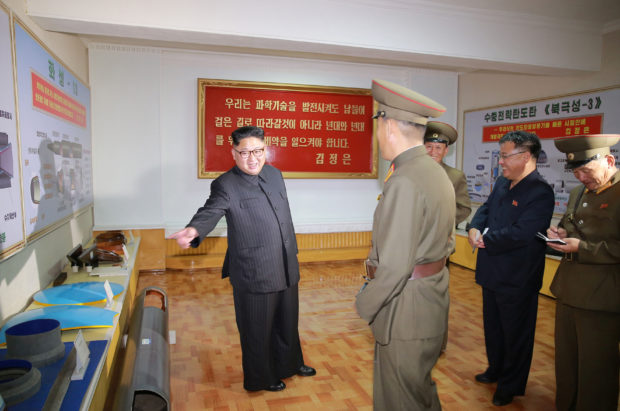 North Korea has successfully tested a number of new weapons systems this year, including short-, medium-, intermediate-, and long-range missiles. Experts and analysts suspect the Hwasong-14 intercontinental ballistic missile can deliver a devastating nuclear payload to targets across the continental U.S.

Many of the new systems are liquid-fueled rockets, which are vulnerable to preemptive strikes as they cannot be fueled in advance. Requiring a crew of technicians and fuel trucks, as well as time to actually fuel the rocket, the missiles have a much bigger satellite signature. When North Korea tested its ICBM for the first time in early July, the U.S. military reportedly had eyes on them, watching them set up for more than an hour. (RELATED: US Watched Kim Jong Un Prep For His ICBM Launch For Over An Hour)

The North is working to move past this challenge to make its missiles even deadlier. Solid-fueled missiles, like the North Korean Pukguksong-2 medium-range ballistic missile, a land-based variant of the Pukguksong-1 submarine-launched ballistic missile carried on a indigenously-produced transporter erector launcher that the North put into mass production after two successful tests this year, are much more dangerous than their liquid-fueled counterparts. (RELATED: New Missile Is North Korea’s ‘Answer To The Trump Administration)

Solid-fueled missiles can be fueled in advance, reducing the size of the crew required for launch. Furthermore, they can be fired without warning, giving the North the ability to launch surprise attacks. During his recent visit to a department of the Academy of Defense Science, Kim ordered the Chemical Materials Institute to “produce more solid-fuel rocket engines and rocket warhead tips,” North Korean state media reported.

“A very interesting day for wonks, a very bad day for everyone who expects to catch DPRK missiles on the ground before they’re launched,” Michael Duitsman, a research associate with the James Martin Center for Nonproliferation Studies at the Middlebury Institute for International Studies, wrote on Twitter after seeing the latest photos out of North Korea.

Leading experts suggest that North Korea is developing the missiles it showed off in a military parade in April.

North Korea is acclimating us to the notion they might put missiles in those empty tubes they paraded in April. Take the fucking hint. https://t.co/C1SojSd5HU

During an April 15 military parade, the anniversary of the birth of North Korean founder Kim Il Sung, the Korean People’s Army showcased a number of new weapons systems, most of which have been tested in recent months. The two missiles that have yet to make an appearance at the testing ground are two possible canister-launched ICBM models. (RELATED: Kim Jong Un Rolls Out Alarming New Missile Tech In Massive Military Parade) 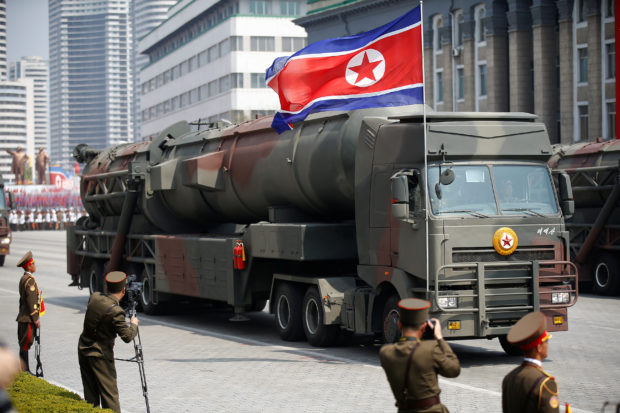 One resembles a Chinese DF-31, while the other looks very similar to the Russian Topol or the Chinese DF-41. The weapons displayed in the parade were almost certainly mockups, but the North is eager to develop the real thing. 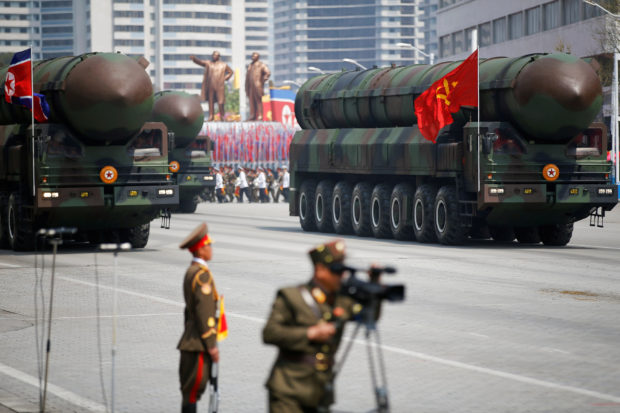 Intercontinental ballistic missiles (ICBM) are driven past the stand with North Korean leader Kim Jong Un and other high ranking officials during a military parade marking the 105th birth anniversary of country’s founding father Kim Il Sung, in Pyongyang April 15, 2017. The missiles themselves were shown for the first time inside a new kind of canister-based launcher Saturday. The trucks upon which they are mounted are originally designed to move lumber. REUTERS/Damir Sagolj/File Photo

As for the new Hwasong model, the diagrams were less clear. But, it looks like North Korea intends to develop a three-stage, solid-fueled nuclear missile with a conical warhead.

Washington and Pyongyang recently engaged one another in a war of words, but the North chose to de-escalate. President Donald Trump suggested that Kim made a very wise decision, later adding that North Korea is “starting to respect” the U.S. “We have had no missile launches or provocative act on the part of North Korea since the unanimous adoption” of the United Nations Security Council sanctions resolution, Secretary of State Rex Tillerson said Tuesday, adding that there may be a path to dialogue. (RELATED: Kim Jong Un Backs Down In Nuclear Showdown With Trump)