This one may sting a bit.

On the latest cover of The Hollywood Reporter is Cooper Hefner, a strapping 25-year-old who has assumed the position of chief creative officer of Playboy Enterprises while his 91-year-old ailing father Hugh Hefner hides in the shallows.

There’s more than a little allusion to unusual family dynamics. Cooper grew up with his mother, Kimberly Conrad, hanging in a nude portrait in the family library.

“Yeah, that was weird,” he conceded in the story.

Except not weird enough because Cooper recently paid a tribute to mom by slapping her on the magazine’s cover for Mother’s Day in June.

But the news that may reach the White House is the part where Cooper rips POTUS. Although The Donald has appeared on the cover — and Trump surrogate Scott Baio met his wife, Renee, at the Playboy mansion — Cooper has no warmth for Trump.

“He observes that the country has been reverting to a reactionary cultural conservatism remarkable in its similarity to the Eisenhower years when Playboy was founded. (President Trump is widely known to have venerated Hugh, but the feeling isn’t mutual: ‘We don’t respect the guy,’ says Cooper. ‘There’s a personal embarrassment because Trump is somebody who has been on our cover.’)”

Indeed, Trump appeared on the cover of Playboy in 1990. During the campaign it was reportedly on his office wall in Trump Tower in a golden picture frame. Crazily enough, the cover was photobombed by Trump’s pastor friend Jerry Falwell Jr. during a campaign visit. 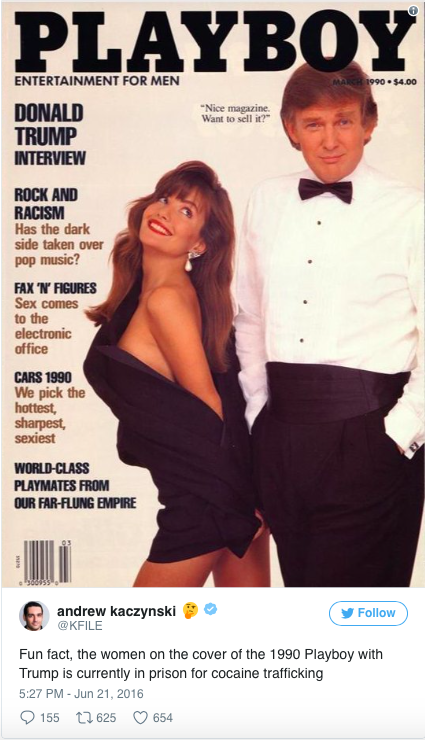