A Denver cheer coach is on leave and under investigation after a video surfaced of him allegedly forcing a teenage girl into a full split.

In the video, East High School cheer coach Ozell Williams, 28, appears to push down upon a girl’s shoulders, while several teammates hold her by the limbs, and collectively force her into a painful split position. The freshman at East High, Ally Wakefield, says “please stop” nine times in 24 seconds, but the practice continues as she contorts.

The viral video prompted an investigation by the Denver Police Department child abuse division and resulted in five members of the Denver School District being placed on leave.

The coach was released from his previous cheer consultant job at Boulder High School for deploying the same controversial exercise tactic. Williams was brought back to teach at a camp, but reportedly fired on the third day after being witnessed using the same split exercise shown in the viral video. He stated in an interview with the Denver Post, “You can definitely say that what was in the video could be seen in a different light. I would love to tell my story, but I can’t say anything else at this time.”

Denver police have not released any further information on the investigation.

Williams has taken voluntary leave from teaching tumbling for his nonprofit youth program, the Mile High Tumblers 5280. His biography on the Mile High Tumblers website indicates that he’s an Olympic athlete who won three first place rings in preliminary games for Team USA.  FOX31 reported that “a spokesman for the U.S. Olympic Committee said “Williams was never on any Olympic roster.” Fox 31 also reported that USA Gymnastics stated that “Nobody has ever heard of him” and there is “no record of him being invited to the Olympic Gymnastics Trials, let alone winning three ring titles.”

The Mile High Tumbler “other programs” page advertises that adult tumblers perform at Denver Broncos home games. Patrick Smyth, Bronco spokesman, stated to Fox31, “This individual has not been involved with our stadium’s game day entertainment for several years and was never an employee of the organization.” 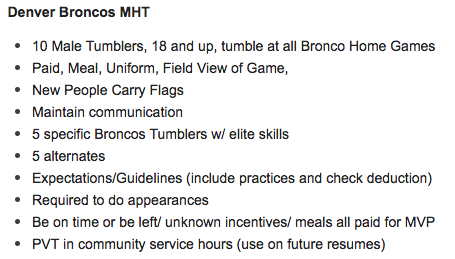 A parent, Cheri Nickolay was quoted by 9News saying, “I don’t understand why that’s allowed.”

“That made me sick to my stomach,” Nickolay added. Her daughter, Anna, quit the team after the video surfaced.

Two members of the East High School cheer team recorded video of the forced splits activity on their cell phone and sent them to 9Wants to Know, who reports that members of the team were required to participate in the exercise unless they had a doctor’s note. The videos showed eight cheerleaders forced into full splits.

Kirsten Wakefield, Ally’s mother, sent a copy of the video including her daughter, to school administrators and asked how they plan to address the way her child received her injury (torn muscles/ligaments) and what they plan to do about it.

Parents reportedly filed complaints for months about the training.