Republican Arizona Sen. Jeff Flake, one of President Donald Trump’s rivals, should be worried about keeping his Senate seat, according to a poll released Monday.

The JMC Analytics poll said that if the GOP primary for the 2018 election was held over the weekend challenger Kelli Ward would be ahead with 47 percent, and Sen. Flake would be behind with 21 percent. Twenty-nine percent of Republican voters said they were undecided.

Flake and Trump have attacked one another, and Trump recently tweeted, “Great to see that Dr. Kelli Ward is running against Flake Jeff Flake, who is WEAK on borders, crime and a non-factor in Senate. He’s toxic!” 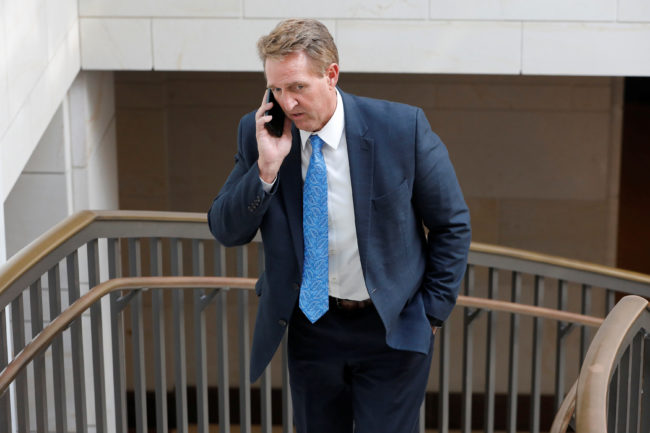 Republican Arizona Senator Jeff Flake departs after a briefing by Secretary of State Rex Tillerson and Secretary of Defense James Mattis before the Senate Foreign Relations Committee on the ongoing fight against the Islamic State, on Capitol Hill in Washington, August 2, 2017. REUTERS/Aaron P. Bernstein

This wasn’t a direct endorsement of the former state senator, but Trump allies are certainly behind Ward. A pro-Trump super PAC, Great America PAC, spent $20,000 helping Ward, according to federal election filings. In addition, prominent Trump donor Robert Mercer gave $300,000 to Ward. Mercer previously gave to Ward’s 2016 campaign in which she failed to beat Sen. John McCain in the state’s GOP primary.

The JMC Analytics poll was conducted on August 26 and August 27 and was of 500 likely Republican voters. It has a margin of error of 4.4 percent.