President Trump may be Teflon to the incredibly dumb things he says and does. But his surrogates — pointedly the infamous Scott Baio and his wife, Renee — showed that they do not rise to the level of our 14K president. Over the weekend, the couple fell from grace after they made complete fools of themselves.

Scott’s Twitter crime comes in the form of a retweet. He retweeted a Sandy Hook truther meme linking Charlottesville victim Heather Heyer‘s mother to Vicki Soto, a teacher who died in the Sandy Hook shootings.

When someone dared to attack Scott, who is more commonly known as “Chachi” or “Charles in Charge,” Renee publicly shamed her. Which she often does when she doesn’t like what she sees on Twitter. But this time she bashed the wrong person: the mother of a 6-year-old child who was murdered at the 2012 Sandy Hook murders in Newtown, Conn.

Shockingly, Scott apologized for his idiocy: “In retrospect, I wish I had thought longer about retweeting that conspiracy photo. I shouldn’t have sent it,” he wrote. “It was wrong. #Baio.” The actor, who made sure to mention the Baio brand in the above tweet, re-upped his existence last summer when he spoke on behalf of Trump at the Republican National Convention in Cleveland.

But all of that may now be for nothing.

A flick of her finger later, his sharp-tongued spouse, Renee Baio, tweeted something so awful that she was forced to lock down her tweets. Chachi’s account remains unlocked. But he has been laying low. His last tweet is from three days ago, when he prayed for the victims of Tropical Storm Harvey.

“Hurricane Harvey looks like a beast,” Chachi exclaimed. “Please be safe, take cover and help others if you can. Praying for all.” 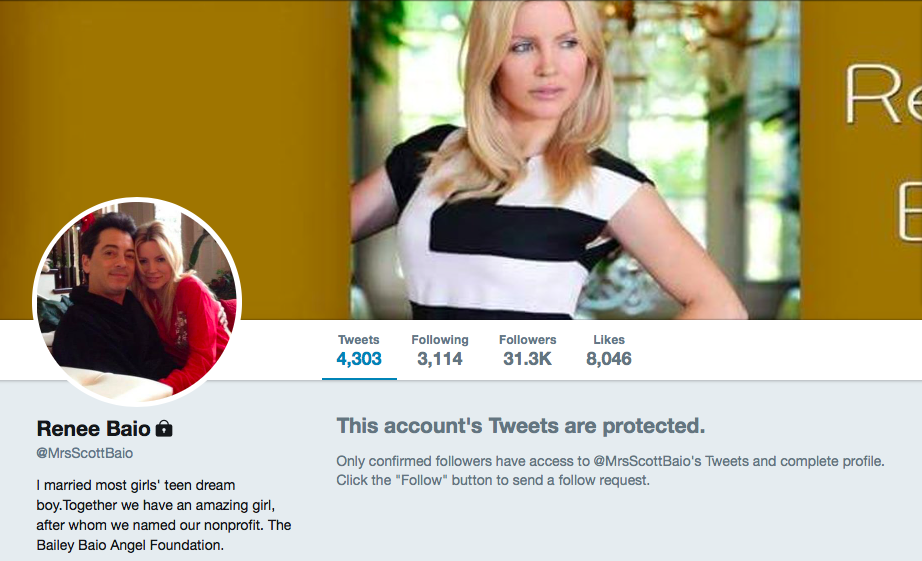 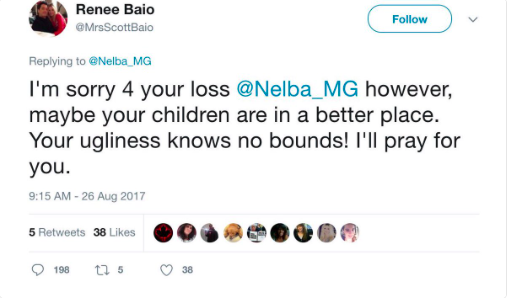 She was responding to Nelba Marquez-Green, the mother of Ana Grace Marquez-Green who died in the Sandy Hook murders.

Marquez-Green had expressed mild sympathy for Renee, who admitted over the weekend that she’d had a health issue. Renee was cagey with specifics. She described it as a “scary setback … transfusion and now bed rest.”

In 2015, People reported that Renee had been diagnosed with a brain tumor. She admitted that she suffers from “migraines” and “cluster headaches.” At the time, Chachi explained to the mag that “although 90 percent of these types of tumors are benign, they can cause serious problems depending on size of the tumor and the the location.” He said Renee had survived the rough times in her life through her faith in God.

She has also reportedly gone through lumpectomies after breast cancer scares. 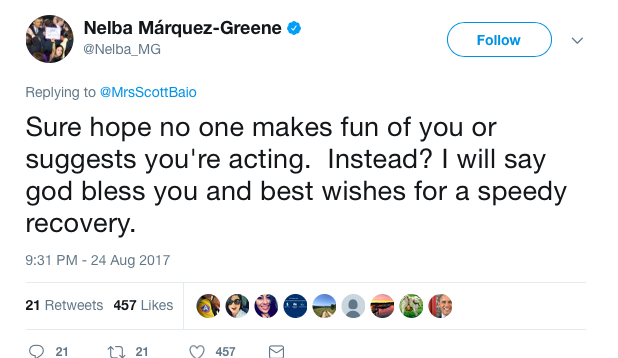 Renee’s tweet about the woman’s dead child has received some degree of play on Reddit‘s “Not the Onion” page. But shhh… if she knew, she might file it under proud moments in her life.

For anyone who has followed Renee Baio on Twitter, trying to shut her up is like sticking your hand into a lion’s mouth with a piece of raw meat. In other words: ill-advised.

It’s hard to imagine what Renee (a.k.a. “Peaches” to some who frequented Pure Platinum strip club in San Diego back in the 90s) is doing with her time now that she’s not publicly spewing her venom on social media.

The reaction has been fierce:

“Peaches needs to stop criticizing and bashing others, acting like a God-fearing Christian, she forgets where she came from and that her past isn’t so clean and pure,” said a source who knew Renee back in San Diego but wanted to speak on condition of anonymity.

*“Only the most vile person could say that to the mother of a Sandy Hook victim. I guess you and Scott are a perfect match. How evil.”

*“Renee Baio, you can delete your hateful tweets but they’ve already been seen.”

*“@MrsScottBaio Renee Baio is human garbage and her husband has always been a shitty actor. #ReneeBaio.”

*“@MrsScottBaio The impedent prayers of a hypocrite like you availeth nothing. #ShamefulBimbo get over yourself.”

*“Fuck Scott Baio. Fuck Renee Baio. Fuck Alex Jones. Crawl back into the maggot filled holes you crawled out of.”

Don’t be confused with a woman whose Twitter feed is @reneebaio. Renee Baio, Scott’s wife, goes by the handle @MrsScottBaio.

*”Feeling kinda bad for @reneebaio who will likely be getting a lot of the hate meant for @MrsScottBaio, a truly vile human being.”

*“People like you make me hope there is a hell. How you could tweet that to a woman who lost her child at Sandy Hook is vile. You have no soul.”

*“Oh cry me a river @mrsscottbaio! You spew vile hate toward a victim of #SandyHook and then you blame the left when people call you out?”

True to form, Renee did not initially react well to the backlash.

“Renee and Scott Baio are unfit to be part of civilized society #SandyHook #ReneeBaio,” she wrote.

This isn’t the first time that Renee Baio has behaved atrociously on Twitter.

In June, she attacked MSNBC’s Rachel Maddow for having male facial hair and said she ought to wax.

And in July, after she experienced a dangerous airplane landing during her 4th of July weekend, she told a Twitter foe off by replying: “If I wanted to hear from an asshole, I’d fart.”