Quote of the Night:

Beware Airbnb hosts: If your place is horrible, you’ll be outed

A granola bar will not tide this political reporter over

“TFW you realize you should have brought more than a granola bar to hold you over during a city meeting.” — Patricia Mazzei, political writer, Miami Herald.

“Tonight’s @NBCNewYork has been more effed up than usual. A smattering of the stories tonight: /1 Crazed naked boyfriend roams the streets after murdering his girlfriend. /2 14-yr-old girl advertised herself as an 18 to get a babysitting job, went to a casino with her mother & left baby outside on a bench /3 Staten Island Assembly candidate claims her opponent made a fake Fbook page to sabotage her & a member of Congress defended the opponent /4 And a Mexican cartel was hiding drugs in candles shaped like sex toys. WTF /5″

Even if you don’t speak a lick of Spanish…it’s not hard to figure this one out.

Remarks from the players…

Boris Ryvkin, former National Security Advisor to Sen. Ted Cruz (R-Texas), got all uptight about this. He wrote The Mirror, saying, “So glad this critically important media misunderstanding has been resolved – Americans can now sleep soundly.”

View of the Potomac near the Georgetown waterfront tonight. pic.twitter.com/0uznSfYFDi

In which I feature a Daily Caller coworker for good or strange reasons.

“Should The Daily Caller bring on and interview the hot woman arrested for having sex on a South Carolina golf course?” — David Hookstead, editor, The Daily Caller‘s “The Smoke Room” in a Twitter poll.

Why infamous Ginger Charles C. Johnson has a bushy beard

Johnson visited The Daily Caller‘s newsroom Wednesday sporting an overly bushy ginger-y beard. He said he bet a Pakistani friend that he could grow his beard longer than his friend. So far, he says he’s lasted 31 days. Below is the current state of his facial hair. 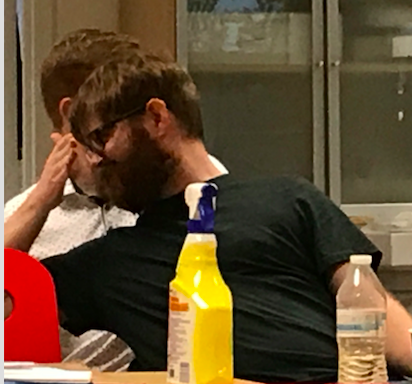