The unnamed executive was one of four who spoke with Sports Illustrated’s Albert Breer, and he didn’t hold back when explaining why Kaepernick isn’t on an NFL roster.

He said the following:

I don’t like the guy as a player. I don’t think he can play. I didn’t think he could play at Reno, I don’t think he can play now. … You don’t think if he was a good player, 20 teams would be lining up? …  He’s inaccurate, inconsistent reading defenses. He needs everything to be perfect around him, and he needs to run a certain offense. When he was rolling, they had an unbelievable defense and a great running game with an amazing offensive line. Everything was perfect. And you consider that, why isn’t there a debate about RG3? He just wasn’t a consideration.

It should be noted the other three executives also all pretty much echoed his sentiments, but in much softer tones. 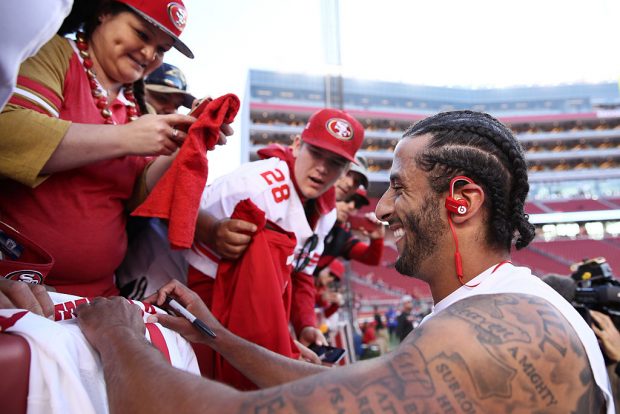 SANTA CLARA, CA – SEPTEMBER 12: Colin Kaepernick #7 of the San Francisco 49ers signs an autograph for a fan prior to playing the Los Angeles Rams in their NFL game at Levi’s Stadium on September 12, 2016 in Santa Clara, California. (Photo by Ezra Shaw/Getty Images)

That NFL executive speaks for a lot of NFL fans with his opinion about the embattled quarterback, and it looks less and less likely with every passing day we’ll ever see Kaepernick on a roster. Seems like disrespecting America certainly has some consequences.