The Southern Poverty Law Center has declared three of America’s largest Army bases Confederate monuments “with the potential to unleash more turmoil and bloodshed” if activists don’t “take down” the Army bases.

The SPLC included Fort Hood in Texas, Fort Bragg in North Carolina and Fort Benning in Georgia on a list of 1,500 “Confederate monuments” that the SPLC claims could inspire more violence like what happened in Charlottesville, Virginia last month. All three bases are named after Confederate military leaders.

The list makes no mention of renaming namesakes of Confederate monuments; taking the monuments down is presented as the only option. The recent leftist campaign against Confederate namesakes and monuments has included a willingness among some far-left actors to destroy government property to accomplish their goals. (RELATED: Man Tries To Blow Up Confederate Statue In Houston)

“More than 1,500 Confederate monuments stand in communities like Charlottesville with the potential to unleash more turmoil and bloodshed,” the SPLC website states. “It’s time to take them down.” 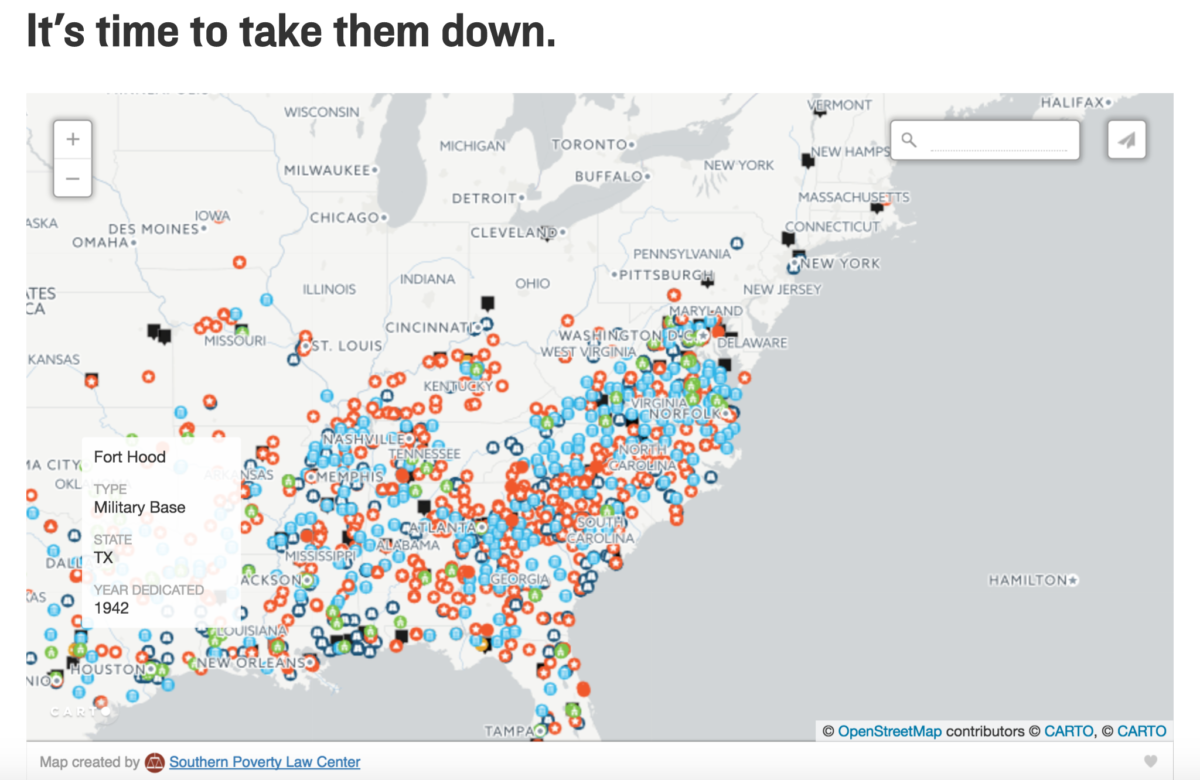 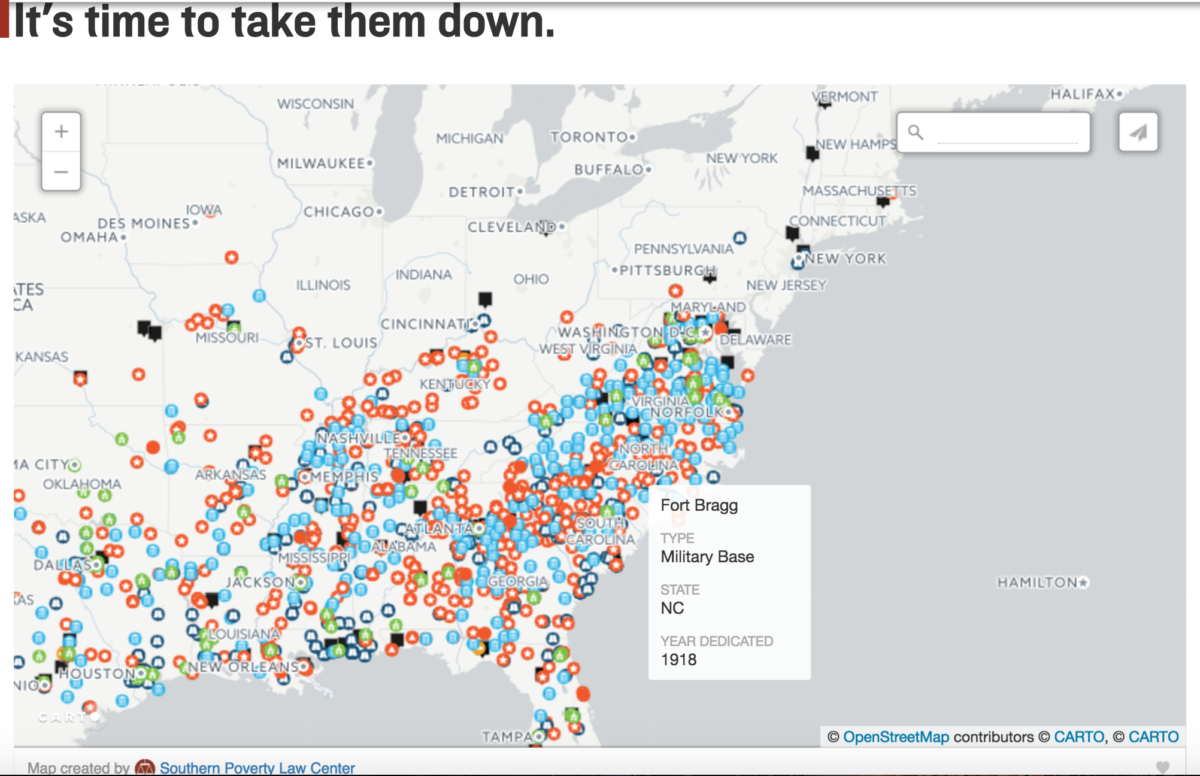 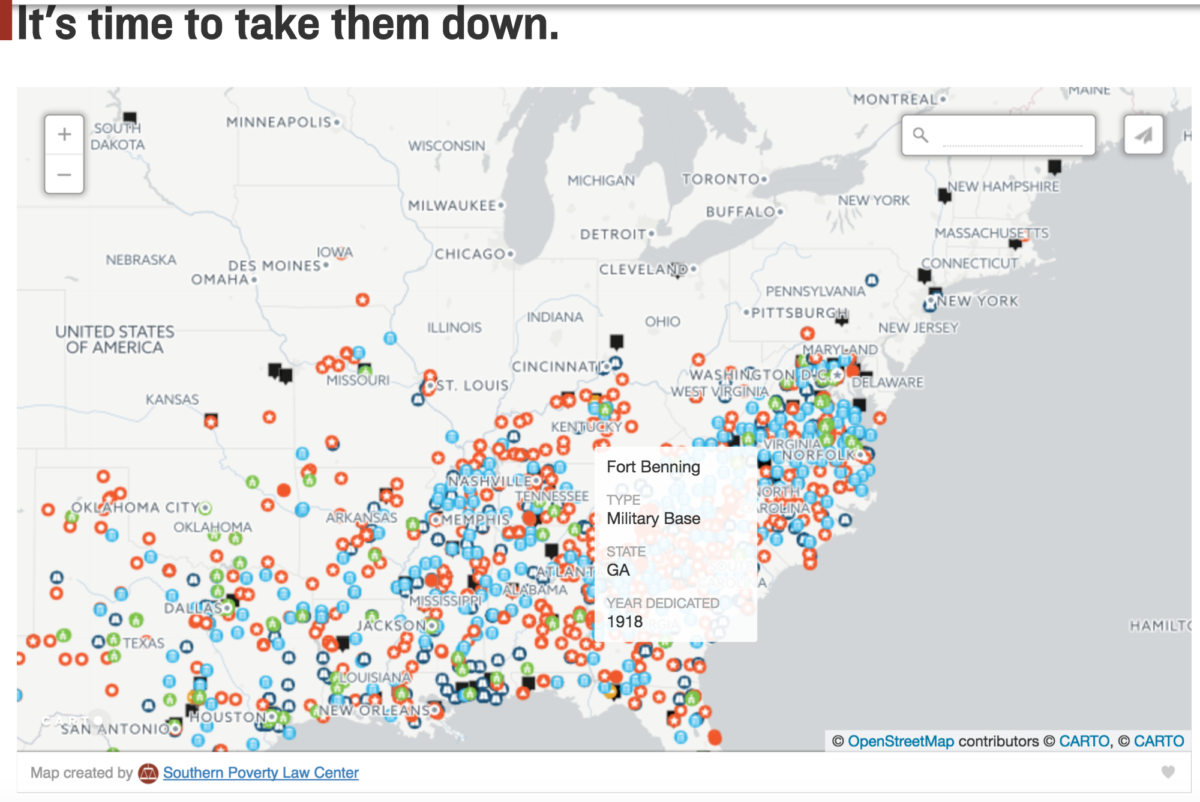 Elementary and middle schools, local streets and even entire towns are included on the SPLC’s list of “Confederate monuments.”

The SPLC is urging leftists around the country to flood their local newspapers with letters to the editor urging the removal of the monuments, although the group’s campaign against the army bases could serve as a dogwhistle for left-wing militants willing to take extreme measures to take down Confederate monuments.

The SPLC’s map of “Confederate monuments” resembles the group’s “hate map” that has repeatedly smeared conservative organizations as “hate groups” and inspired domestic terrorist Floyd Lee Corkins II to shoot up the Family Research Center in 2012.

At the same time that the SPLC is waging its campaign against Fort Hood, approximately 400 American soldiers stationed at the base are down in Houston helping victims of Hurricane Harvey. (RELATED: Left-Wing Agitators Call For Escalated Tactics In Response To Charlottesville)