Energy expert Myron Ebell served as the Trump administration’s head of transition for the Environmental Protection Agency and became the “target” of radical environmental groups’ hate campaigns, he told The Daily Caller News Foundation in an exclusive interview.

He became a focus of protests, with some even even using projectors to shine his name on to the EPA building while chanting, “Stop the Evil Myron Ebell!” 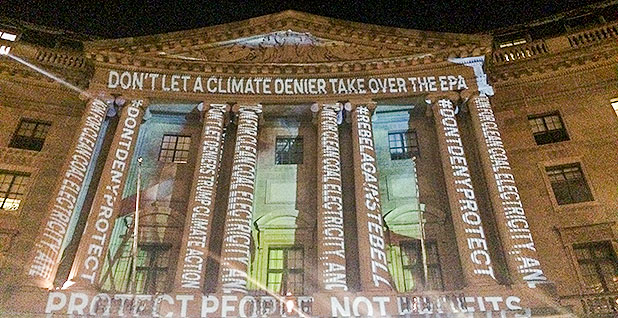 He continues to hit back by explaining how the Trump administration is unwinding strangling government red tape, and highlighting the president’s efforts to stimulate energy, mining, agriculture, forestry and manufacturing in America again.

Ebell, who has been working for decades on energy and environmental issues in Washington, D.C. For the Competitive Enterprise Institute, says in this video interview that his efforts are often swamped by a huge, power-hungry environmental lobbying effort. The top 50 environmental groups, he says, have a total of $3.5 billion in funding, compared to CEI’s annual $8 million.

He firmly believes there is a “strong moral case for energy abundance.” Real consequences result from replacing coal, oil and natural gas with wind, solar or alternative fuels.

When 1 billion people in the world have no electricity, and another billion have minimal electricity, climate change activists should be challenged for their moralizing of this real issue, he says.

“Consider the moral consequences of keeping poor people in perpetual energy poverty.” Too many take what Americans have for granted, he explains.

He calls former Vice President Al Gore someone who wants to be a messiah and authority, while making lots of money from his “pathetic shtick.”

“Time has passed him by,” Ebell says.

Ebell says if Trump hadn’t pulled the U.S. out of the Paris Climate Treaty, we would have had to reduce greenhouse gases by 26-28 percent below 2005 levels by 2025. This would mean more expensive energy and less jobs, he says.

As for suggestions for Trump, he hopes the president will stay the course on his deregulatory efforts and fix the problems plaguing the slow pace of filling confirmable nominees throughout the federal government.

Videographer Sean Moody is credited with the video work for this piece.