If it’s a long Labor Day weekend, you can bank on Montel Williams doing or saying something idiotic. And thank God the washed up daytime talk show host turned Twactivist didn’t disappoint us.

This one is particularly strange.

Montel claims that he did not tweet the vulgarity involving President Trump‘s ex-Chief Strategist Steve Bannon‘s toe. You read that right — his toe.

Anyhow, here’s what he’s talking about: 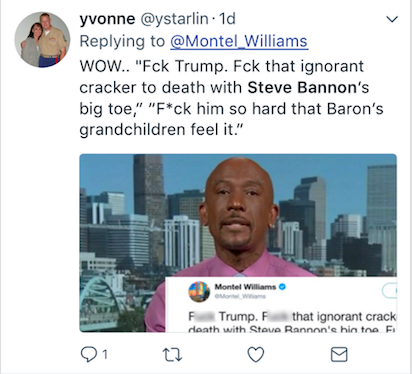 It sure looks like Montel tweeted about that “ignorant cracker” Steve Bannon. But hey, I’m feeling kind. So let’s give Montel the benefit of the doubt despite a picture of Montel’s verified Twitter account. 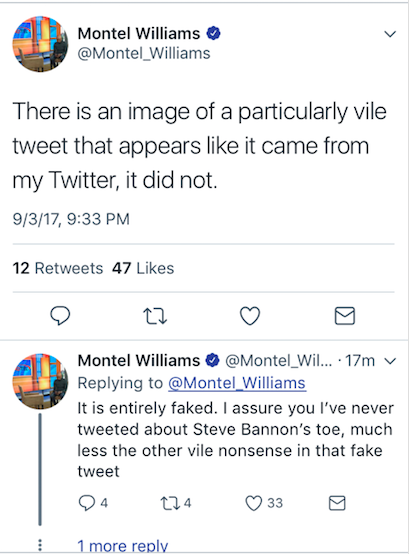 But don’t be too taken in by Montel’s denial. He may not have tweeted about Bannon’s toe sharply affecting the well-being of Barron Trump‘s grandchildren, but he has tweeted disgusting, vile utterances in the past.

For instance, remember back in June when Rep. Steve Scalise (R-La.) nearly died on a baseball field in Virginia at the hands of a left-wing nut? Rep. Mo Brooks (R-Ala.) was also the field that day. Montel really put his maturity on display. 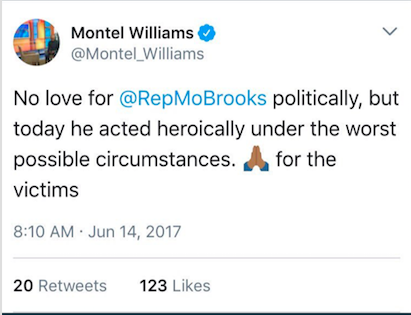 There were the times that Montel called Bannon an “anti-Semite,” a “neo-Nazy,” a “chief Nazi,” and a “bigot.” After Trump first hired Bannon, Montel called the President a “racist, anti-Semitic FREAK.” 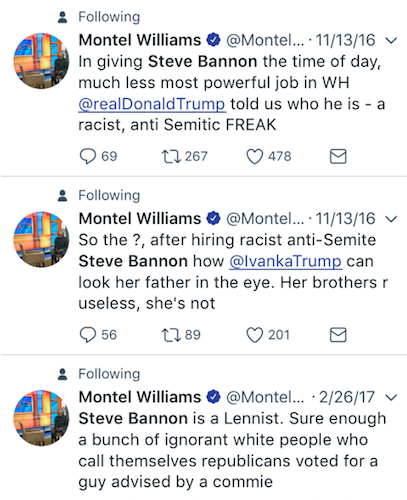 In November, 2016, Fox News’s Judge Jeanine Pirro, wrote on Twitter, “I think people are going to like what they are going to see with Mr. Trump and they should be excited.”

Always a gentleman, Montel replied, “Forgive me while I throw up. So Fox News wants me to be excited about Steve Bannon? A neo-nazi? Deal me out.”

In January, 2017, Montel, a well-known pothead, remarked on Twitter, “Holy hell, Trump put his chief Nazi Steve Bannon on the NSC. What the hell qualifications does he have besides being a bigot?”

That same month he called Bannon a “fat Nazi.”

A follower, Dan the Man, called Montel a “hater” and asked him to compare his qualifications to Bannon’s. Montel went berserk and forgot how to use proper punctuation:

“Am I on the national security council! [sic] Of course not! Nor should Donald’s fat nazi Steve Bannon.”

Montel is truly the gift that keeps giving.

So thank you, M-dog. Enjoy the rest of your weekend.